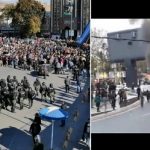 On December 23, 2019, the Secretariat of the National Council of Resistance of Iran (NCRI) issued a statement providing more information about the clerical regime’s bloody crackdown against the Iranian people during the November Iran protests.

According to NCRI’s statement, the People’s Mojahedin Organization of Iran (PMOI/MEK) published the names of 10 more protesters killed by the security forces of the regime bringing the number of victims identified to 547. The MEK has confirmed more than 1,500 have been killed in different provinces across the country, among them many women and minors. Reports obtained by the MEK indicate over 12,000 have been detained.

“More than a month after the November uprising, the regime, fearing the domestic and international consequences of a great crime against humanity, continues to hide the number of those killed, their names, and the number of those arrested. The mullahs are desperately trying to buy time and engage in lies so that the massacre is forgotten. [Iranian regime President Hassan] Rouhani’s Spokesman Ali Rabii has repeatedly promised to announce the number of those killed. Today, the question about when the death toll will be announced, he said, ‘The prosecutor’s office will make that announcement. All of us have to wait.’” The NCRI statement reads in part.

The figures provided by the MEK was confirmed by a recent report published by Reuters.

“About 1,500 people were killed during less than two weeks of unrest that started on Nov. 15. The toll, provided to Reuters by three Iranian interior ministry officials, included at least 17 teenagers and about 400 women as well as some members of the security forces and police.” the Reuters report reads in part.

Following Reuter’s report Mr. Mohammad Mohaddessin, the chairman of NCRI’s Foreign Affairs Committee responded to the report reiterating the fact that in its November 17th statement, the NCRI said, “IRGC forces opened fire on the people on strict orders from Khamenei.” On December 15, the NCRI announced that the martyrs were more than 1500. Now on Dec.23, three officials of the mullahs’ regime have confirmed the figure to Reuters, Mohaddessin said. The same three officials have confirmed that Khamenei in a private meeting with senior regime officials reiterated, “The Islamic Republic is in danger. Do whatever it takes to end it. You have my order.”

The same 3officials have confirmed that Khamenei in a private meeting with regime’s senior officials has reiterated: “The Islamic Republic is in danger. Do whatever it takes to end it. You have my order,” #Iran #IranProtests #StopIranBloodshed

Mr. Brian Hook the U.S. Special Representative for Iran responded to this report by saying, “The Reuters report on the massacre ordered by [Iranian regime Supreme Leader Ali] Khamenei underscores the urgency for the international community to punish the perpetrators and isolate the regime for the murder of 1,500 Iranian citizens.”

Representative McCaul of House Foreign Affairs GOP responded to the report by saying: “Deeply disturbed by this report. America stands with the Iranian people and will continue to support their human rights. The U.S. will continue to hold the Iranian regime accountable for its crimes against peaceful protestors.”