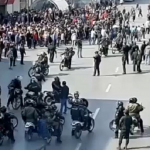 Written by Mohsen Aboutalebi on December 17, 2019. Posted in NEWS

For more than a month, the regime ruling Iran has had to put up with widespread protests and major calls for regime change. The situation started off as small protests across the country, but it has quickly turned into the biggest uprising that the regime has ever faced.

The Mujahedin-e Khalq (PMOI / MEK Iran) has been instrumental during the past month. Not only has the MEK Iran supported the people, but the main opposition has also been keeping track of the situation and relaying it across to the MEK Iran network outside the country. This has proven to be invaluable, given that the regime has cut the internet off to ensure that the people cannot communicate easily amongst each other and also to prevent the outside world from finding out what exactly has been going on.

The MEK Iran has said that there have been more than 1,500 people killed. Members of the MEK Iran all across the country are working together to gather the names of those that have been confirmed dead.

There have also been more than 4,000 people injured, with the MEK indicating that many people have been shot. Videos taking during confrontations between the security forces and the people clearly demonstrate that the regime’s agents are attacking defenseless people.

Amnesty International has released a statement saying that the security forces are clearly “shooting to kill”, with many of the casualties being shot in the head, chest or through a vital organ.

Take action now and sign @amnesty's petition to demand the release of those arbitrarily detained in Iran https://t.co/nknPou9JKh #IranProtests

Regarding the total number of protesters that have been arrested, the MEK Iran has said that the count exceeds 12,000. This is a very worrying situation and the regime is denying the people of Iran one of the most basic human rights – the right to peacefully protest.

The MEK Iran and the National Council of Resistance of Iran (NCRI) call on the United Nations to send a delegation to Iran without further delay in order to establish the extent of the regime’s crimes. The MEK Iran and the NCRI also call on the international community to back the people of Iran and support them in their pursuit of demands that are legitimate – freedom, democracy, the respect of human rights, and equality.

At the weekend, supporters of the MEK Iran gathered in Oslo in Norway to voice their concerns with regards to the treatment of protesters in Iran.

The MEK Iran has wide support both inside and outside of Iran. The organization has existed for decades and it is working towards establishing democracy in Iran so that the people can enjoy their rights and live free from the brutal rule of the mullahs.

MEK Iran is the biggest threat to the regime’s survival and it is fully behind the people of #Iran in their quest for human rights, freedom, and democracyhttps://t.co/8oBy9EePEJ#IranProtests #MEK @USAdarFarsi pic.twitter.com/XBk9exEGzU

MEK Iran Resistance Units across the country have been ensuring that the uprising continues so that the regime realizes that the people will not be silenced through violent suppression. The fact that, one month later, people are still talking to the street and making their voice heard despite the very real risks of arrest, injury or even death, shows just how courageous and determined the people are.