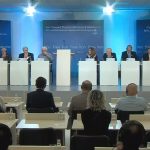 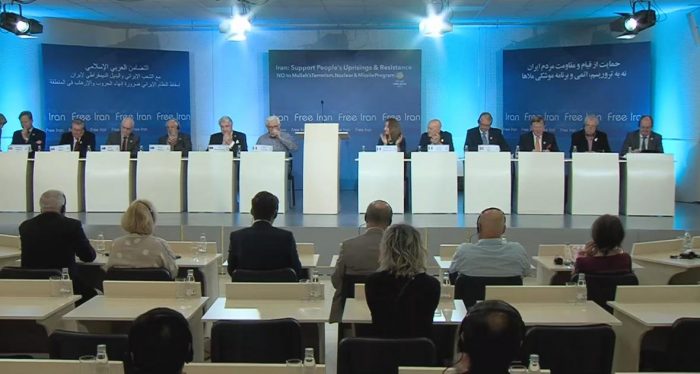 On day 3 of Free Iran convention at the MEK’s compound in Albania, a conference hosted very distinguished European politicians that discussed EU’s ongoing positions on Iran. The conference was titled, “Iran: Support People’s uprisings and Resistance
No to Mullahs’ terrorism, Nuclear, and Missile program”-July 13, 2019- Ashraf 3

On Sunday, July 14, 2019, the fourth day of the Free Iran Conference at Ashraf 3, the MEK’s headquarters in Albania called for an end to Europe’s policy of appeasement to the mullahs ruling Iran. The conference began with a panel of distinguished speakers from Europe. The topic of the panel was “Iran: Support People’s Uprising and Resistance. No to Mullahs’ Terrorism, Nuclear, and Missile Program.”

The panelists touched on a number of issues during the two-hour event. Some of the most notable moments from the panel are summarized below.

“The West should end appeasement of Iran’s regime. We should support the Iranian people and the organized Resistance, the MEK, to bring about regime change. A viable alternative to the regime exists in Iran. It is the National Council of Resistance of Iran,” said Corsini.

.@Offord4Hendon: "The world is realizing there's an alternative to Iran's rgm. It's the PMOI (MEK) in Ashraf 3. The world is starting to wake up to @Maryam_Rajavi's 10-point plan for a #FreeIran. I genuinely believe change is coming to Iran"
#IStandWithMaryamRajavi #WeSupportMEK pic.twitter.com/LJ7zEJvNXZ

“The Iranian regime is making a mistake in thinking that we in Britain will be scared of its provocations. It should be assured that the UK is not scared. The UK has made it very clear we will protect ourselves, Dr. Offord said.

“I genuinely believe change is coming to Iran,” said Offord. The members of the MEK have re-emerged from the destruction of Camp Ashraf and Camp Liberty. They have launched Ashraf 3 and have been embraced by the people of Albania,” he added.

“We first came to Albania back in 2014 with a task to the country’s Prime Minister, Mr. Edi Rama, and we asked him to accept more Camp Ashraf and Camp Liberty residents,” said Binley.

“We pleaded with the Prime Minister and it wasn’t hard. He asked us shouldn’t you be making this request to other European countries? We told him we were working hard on this issue and the Prime Minister said he would accept more Ashraf/Liberty residents. I pay massive tribute to Mr. Edi Rama for convincing the people of Albania to accept more of the Iranian opposition members in their country,” Binley continued.

Ex British MP Brian Binley: "We must have meetings w/ the next UK Prime Minister to introduce @Maryam_Rajavi's 10-point plan for a #FreeIran & explain how important it is for the whole world. Iran's theocracy has no place in the 21st century"#IStandWithMaryamRajavi #WeSupportMEK pic.twitter.com/oBYcUbhfxQ

“Having revisited Albania now, this country has made great progress in the past five years,” he added.

“This great city of Ashraf 3 showed Mr. Rama kept his process. There has been astounding progress in Ashraf 3. All this work in just a year and a half is incredible. I always knew that those of people who had gone through the hell of Camp Liberty would get things moving for themselves. You have built yourself a city and I congratulate you from the bottom of my heart, Mr. Binley said warmly.

“There’s more work to do and that is our task. There is much we can do in our country for the ten-point plan of Mrs. Maryam Rajavi,” he stressed.

“Ashraf 3 is not only a symbol; you are a sample for the future of Iran. You are no longer just resistance against the regime; you are now a freedom movement,” said Mr. D’Elia.

“You can be free and also build up Iran. You are reliable, trustworthy, symbols of law and justice. By seeing Ashraf and you, I am convinced the MEK have created a sample of Iran in this city.

I hope we are in Tehran next year. We can see Tehran here because Ashraf 3 exists and future free Iran will also become a reality. The MEK is now part of my family, and that is why I call you my brothers and sisters,” he concluded.

Former Irish Minister John Perry: "It's time for Europe to support @Maryam_Rajavi & Iran's ppl to remove the Khamenei regime and the mullahs from power. The future generation of Iran deserves an opportunity to live a #FreeIran."#IStandWithMaryamRajavi #WeSupportMEK pic.twitter.com/ipwZrUUHM1

“It is very important to see the encouraging work of the PMOI/MEK. Especially when 56 million people are under the age of 25 in Iran. The new force of technology will certainly spread the word,” said Perry.

“It is now time for Europe to stand with Iran, and say enough is enough, to support Iranians remove the Khamenei regime and the mullahs from power. The future generation of Iran deserves an opportunity to live a free Iran,” he stressed.

Senator Horkan referred to the speed at which Ashraf 3 had been constructed, saying, “We never think things will change so quickly, but they will. Hopefully, very soon we will see free, fair and democratic elections in Iran and Iranians will be voting for President Maryam Rajavi at the first election for a free and democratic Iran where freedom of religion is allowed. That is part of the Ten-point plan that we support.”

“There is huge global support for the NCRI and MEK in Ashraf 3. Hopefully, soon we will see action and deliver results, including a free and fair government in Iran,” he concluded.

Leo Dautzenberg, ex-member of Germany's Bundestag: "The Federal Court in Germany has ordered action against the Iran's regime for spying on and planning terrorism against the opposition MEK (PMOI)"#FreeIran #IStandWithMaryamRajavi #WeSupportMEK pic.twitter.com/ySiDUwu3yU

“The people in Iran and their struggle is the best sign of change to come to Iran. We can see that the mullahs are using Iranian wealth for their private interests. They are using the Iranian people’s money for terrorism and accelerating war in the Middle East. We do have a great responsibility and a duty towards the Middle East, and we should conduct this together,” said Dautzenberg.

“With the protests in Iran, we can also see that toppling the Iranian regime has to happen from within the country, and we have to support it from the outside. The change must come from within and from Ashraf 3,” he added.

“You have a president who, with her Ten-point Plan, which is very convincing, has created an alternative which represents freedom and democracy. This is also our choice for the future. From a European and German angle, we need to step forward and support this ten-point plan,” he concluded.

Swedish lawyer Kenneth Lewis: We must convince ppl in Europe that appeasement of Iran's regime is not the way forward. Human rights should be the most important aspect in dealing with the rgm. Huge support is growing for the MEK & a #FreeIran#IStandWithMaryamRajavi #WeSupportMEK pic.twitter.com/6zH67Hd8Sl

“There are still a lot of people in Europe who have not understood that appeasement is not the way forward, and don’t care about human rights. Huge support is growing for this movement and we have work to do,” said Mr. Lewis.

“Human rights should be the most important aspect in dealing with the regime in Iran,” he stressed.

“Ashraf 3 is a wonderful achievement. This is an important part of the resistance. The fight to overthrow the mullahs is taking place on the streets of Tehran. Your program will be an essential contribution to that,” Lewis concluded.

Former President of Law Society of England and Wales

“We in the U.K. Law Society have and will support your cause for a free Iran. We want freedom for you. I couldn’t believe what a wonderful community and spirit is in Ashraf 3. This is not a town, it lives and breathes. The mothers and daughters who have suffered so much are so positive in spirit. This is a wonderful community of people,” said Ms. Lee.

“I believe that we are now so close. I want for all the men and women of Iran to have freedom. Next year we will be in Tehran,” she concluded.

Australian Pastor Brian Medway: "We support the MEK. Your integrity & commitment, to serve the best interests of Iran, without any idea of how long this may take, this draws our affection. We will make your voice known in Australia"#FreeIran #IStandWithMaryamRajavi #WeSupportMEK pic.twitter.com/ZRBDScFXI9

“We support the MEK. Your integrity and commitment to serve the best interests of Iran, without any idea of how long this may take, this draws our affection. We will make your voice known in Australia,” said Medway.

“In 2005 my wife and I visited the MEK in Camp Ashraf in Iraq. After the first two days in Ashraf, my wife said I have never experienced such love. Ashrafis are people of integrity and love. It is the complete opposite of the regime in Iran,” said Mr. Rise of his experiences with MEK members.

Maltese MP Frederick Azzopardi: "To the Iranian opposition MEK in Ashraf 3 I say, your cause is our cause. Your pain is our pain. Your fight is our fight. God willing, your victory will also be our victory. We salute your bravery."#FreeIran #IStandWithMaryamRajavi #WeSupportMEK pic.twitter.com/Hu89BwVhWA

“The Iranian people are being denied their universal rights. The Iranian regime funds terrorism and threatens the world with nuclear proliferation. This regime is responsible of crimes against humanity that are punishable under international law,” stated Mr. Azzopardi.

Our message to the people is: We will never abandon you until your justified cause is fulfilled. You are, indeed, our heroes. Our common mission is a free Iran,” he concluded.

“In solidarity, we will continue to support the Iranian people. The MEK members in Ashraf 3 should be known as the ‘overcomers.’ For the Iranian people, the future is much brighter than the past,” said the former Canadian MP.

.@Alfreddezayas: "Iran's regime has executed 120,000 MEK members. I have long supported @Maryam_Rajavi's ten-point plan for a #FreeIran. Human rights violations in Iran are so massive that they constitute crimes against humanity."#IStandWithMaryamRajavi #WeSupportMEK pic.twitter.com/c7f9axFKpD

Former U.N. Independent Expert on the Promotion of a Democratic and Equitable International Order

“The mullahs are not just going to roll over. Change, however, must come from within. I wish you success, perseverance, peace, and happiness in Iran,” said Professor de Zayas.

Lyons also called attention to the plight of British-Iranian dual national citizen Nazanin Zaghari-Ratcliffe. “She was arrested as a spy in Iran by the regime and separated from her baby,” Lyons explained. “The mullahs didn’t even give her decent medical attention. This is an outrageous example of the mullahs’ treachery. The mullahs’ attitude is making people understand far more about the need to support the Iranian Resistance and regime change in Iran. The evidence is here. Public opinion is strong and we will continue to campaign until we win,” he concluded.

.@amessd_southend: "This #FreeIran conference and gathering in Albania is all about democracy. Iran's democratic opposition MEK have set an example in building Ashraf 3 in such a short period. It is absolutely magnificent."#IStandWithMaryamRajavi #WeSupportMEK pic.twitter.com/wEMv48XxDo

“This Free Iran conference and gathering in Albania is all about democracy,” said Sir Amess.

“What an example of the MEK to build such a wonderful camp in such a short period. It is absolutely magnificent. It is wonderful being with people who seek to establish freedom and justice for the Iranian people,” he added.