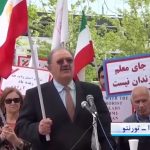 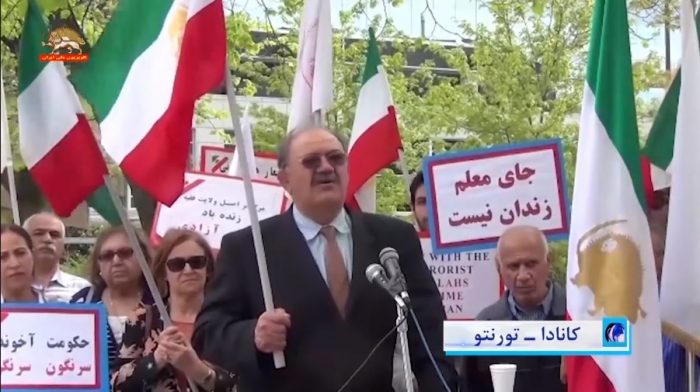 World wrestling champion Moslem Skandar Filabi, chairman of the National Council of Resistance of Iran’s Sports Committee speaks at a rally in Canada, condemning the new wave of repression against the opposition- May 2019

On Wednesday, MEK supporters in Canada, Norway, Austria, Sweden, and the Netherlands held demonstrations in protest of the Iranian regime’s suppression of its own people and its support for terrorism abroad.

Protesters in Toronto honored the day of the execution of MEK founders by the Shah’s monarchy in 1972. Moslem Eskandar Filabi, chair of the National Council of Resistance of Iran (NCRI) Sports Commission gave a speech in commemoration of the MEK founders and their sacrifice. He also thanked the MEK members who have worked since then to bring democracy to Iran.

MEK protesters at the Ottawa demonstration called on the Canadian government to follow the United States’ lead and designate the Islamic Revolutionary Guards Corps (IRGC) as a terrorist organization. They also challenged the Canadian government to go further and designate the regime’s Ministry of Intelligence and Security (MOIS) as a terrorist organization as well. The Iranian protesters at the rally declared the desire of the Iranian people to overthrow the clerical regime and replace it with a free democracy.

NCRI representative Parvis Khazaei gave a speech at the demonstration in Oslo. Protesters at the rally called on the Norwegian government to blacklist the IRGC and MOIS and to issue sanctions against the Iranian regime.

MEK supporters in Vienna held a rally in solidarity with the MEK’s growing network of Resistance Units in Iran and their fight to bring democracy to the country. The protesters held signs that read, “Uprising with Resistance Units.” They chanted, “[Iranian regime President Hassan] Rouhani is a terrorist!”

Demonstration in The Netherlands

MEK supporters in The Netherlands held a demonstration in Amsterdam in protest of the cruel and suppressive actions taken by the IRGC against the Iranian people. The protesters held signs describing the IRGC’s forty-year-history of torture, suppression, executions, and malign activities at home and abroad.

MEK Supporters in Genevee held a rally outside of the United Nations European Headquarters. One protester held a sign that read, “Effective sanctions targeting the mullahs’ regime is needed to stop the regime’s support for terrorism.”

The protesters chanted, “Plundering, crimes, Down with the mullahs’ regime!”

MEK members in Stockholm held a rally in support of NCRI President Mrs. Maryam Rajavi. The demonstrators reaffirmed their commitment to fighting for regime change in Iran.

MEK supporters in Gothenburg recognized the anniversary of the execution of MEK founders. They held signs saluting the MEK’s Resistance Units.

MEK supporters in Malmö focused on the Iranian regime’s human rights violations at their rally. One protester held a sign that read, “Teachers don’t belong in prison.”

The sign was in reference to the imprisonment of teacher activists by the Iranian regime. Teachers in Iran held numerous strikes and protests in 2018, including three nationwide strikes. The teachers were protesting substandard pay and benefits, a poor work environment, the inability to form labor unions, and the regime’s refusal to address their concerns. Because of the regime’s anti-labor laws banning trade unions and its aggressive crackdown on political dissent, a number of the teachers responsible for organizing the strikes and protests were arrested. Many of them are now serving long prison sentences.