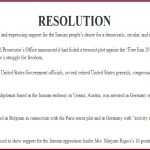 H. RES. 374: Condemning Iranian state-sponsored terrorism and expressing support for the Iranian people’s desire for a democratic, secular, and non-nuclear republic of Iran. Introduced May 10, 2019

A bipartisan group of congressmen introduced a resolution in the United States House of Representatives this month expressing “support for the Iranian people’s desire for a democratic, secular, and non-nuclear republic of Iran.”

House Resolution 374 was drafted with support from more than 50 congressman from both sides of the aisle and calls on relevant agencies “to work with European allies” and to help “prevent the malign activities of the Iranian regime’s diplomatic missions, with the goal of closing them down, including the Iranian embassy in Albania.”

Ken Blackwell, a member of the Council on Foreign Relations and Former U.S. Ambassador to the United Nations Human Rights Commission, praised the resolution in a May 21st op-ed on the conservative American Townhall website.

Blackwell noted in his op-ed that the resolution was justified by three terrorist plots that were attempted by the Iranian regime in Europe and North America last year and foiled by Western authorities. These plots have led to the expulsion of at least five Iranian diplomats from France, the Netherlands, and Albania for threats to security in Europe. An Iranian regime diplomat is currently awaiting trial in Belgium for masterminding a foiled terrorist attack on MEK supporters at the annual gathering of the National Council of Resistance of Iran in Paris last summer, which was attended by tens of thousands of people and dozens of politicians and dignitaries from all over the world, including the United States and Europe. Two Ministry of Intelligence and Security (MOIS) agents were arrested by FBI agents last summer for spying on MEK members in the United States.

Blackwell cited a recent report published by the U.S. Representative Office of the National Council of Resistance of Iran (NCRI-US) which found that these terrorist plots by the MOIS were planned in collaboration with the regime’s Ministry of Foreign Affairs under the supervision of Foreign Minister Javad Zarif.

Despite his role in the regime’s continued terrorist acts in the United States and Europe, Zarif frequently travels to New York and Europe to complain about the effects of U.S. policies on the regime. Blackwell argued that Iran could end the country’s isolation from the international community by behaving like a normal country instead of relying on terrorism as “the primary instrument of statecraft.”

Diplomatic Responses to the Iranian Threat

The United States has responded to the Iranian threat with the imposition of new sanctions, as well as the designation of the Islamic Revolutionary Guard Corps (IRGC) as a Foreign Terrorist Organization. The EU has acted by including the MOIS Internal Security Division and two of its known operatives on its list of terrorist organizations.

Blackwell pushed back against the idea that these policies would increase the potential for war with Iran, arguing that they have prevented further attacks on Western personnel and members of the Iranian Resistance.

Blackwell further emphasized that the Iranian Resistance provides the only long-term solution for peace in Iran. The ruling regime has shown itself to be comfortable committing terrorist acts on European and U.S. soil. It is time to recognize the right of the Iranian people to choose democracy instead of tyranny.

U.S. Policies Can Manage The Threat Of Iranian Terrorism But Iran’s People Can Eliminate It https://t.co/LXTUd1MMhu @townhallcom

House Resolution 374 acknowledges the nationwide uprising of December 2017 that spawned a protest movement that continues today. According to Blackwell, this reflects growing confidence among Western lawmakers and members of the Iranian Resistance that regime change is coming soon. The movement has gathered widespread support within the country since the uprising and continues to grow.

The Resolution also explicitly mentions NCRI President-elect Mrs. Maryam Rajavi’s 10-point plan, which calls for “the universal right to vote, free elections, and a market economy, and advocates gender, religious, and ethnic equality, a foreign policy based on peaceful coexistence, and a non-nuclear Iran.”

Blackwell concluded his op-ed by stating that continued economic and diplomatic pressure on the Iranian regime was important, but the Iranian opposition presented the most vital force in eliminating the threat of Iranian terrorism.