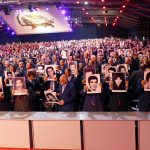 Written by Admin on September 21, 2018. Posted in MEK (PMOI) IN MEDIA, PMOI/MEK Support in Iran

Members of MEK raise photos of some of the fallen heroes and heroines of MEK, for standing to the criminal regime in Iran

The Iranian regime’s rising panic about the Iranian opposition movement, specifically the MEK, displays itself in state media on a regular basis. For decades, the mullahs denied that the MEK had any influence within Iran, but the regime can no longer dispute the power that the opposition group has in organizing popular protests on a daily basis through its resistance units.

Now the regime and its mouthpieces in the state-run media have changed their strategy of attempting to understand how the MEK works in order to stop the uprising that is taking place across Iran.

In an opinion piece dated September 16, 2018, a pro-regime writer from Baharestan County discussed threats to the regime and how to identify those threats and prepare for them. The main threat identified in his piece was the MEK, whom he described as the regime’s “number one enemy,” saying that the regime must “make [their]] forces vigilant and raise awareness among them disregarding all the unnecessary positions and all the other enemies that are not serious.”

The author went on to discuss other threats to the regime. He wrote: “Are Israel, the U.S., and Europe the main threats against us? Of course, they remain our enemies but can the U.S. truly overthrow the Islamic Republic? How about Israel? Certainly not. So, a realistic outlook demands that we determine as a first step that the main enemy is not a foreign force but an internal one.” It is clear that the regime and its supporters see the MEK as an existential threat. The regime is so fearful of the MEK that it planned multiple terrorist attacks this year on the group, all of which were foiled.

The opinion piece goes on to describe the ways in which the MEK poses a legitimate threat to the mullahs’ regime. The piece says: “One is their desire to overthrow the establishment, and the other is their capability to make that desire come true.”

The author writes that other groups do not have both the desire and the power to overthrow the regime. Monarchists do not have the power translate their desire into reality because “because none of the monarchist individuals are prepared to have their nose bloodied for the sake of this objective let alone being killed on this path.” He also notes that no Marxists and secular groups “both have the desire and the ability to overthrow the establishment.”

The author emphasizes that “the MEK meets both requirements for the overthrow of the regime” and that regime Supreme Leader Khamenei has made the same point repeatedly. He goes on to say, “Therefore, it is necessary that we identify them … without any concern, to raise awareness and to prepare all the insiders against this real and serious opponent.”

The author of the opinion piece believes that the MEK will display a show of power during the month of Muharram. He then cited unnamed reports indicating that the MEK is setting the stage to launch activities during Muharram (A month dedicated to religious ceremonies that prepares the ground for mass gatherings in Iran).

This latest piece of state media is just another example of the fear that is emanating from the regime loyal forces and an admittance to the influence the MEK has on the youth. The MEK’s resistance units have organized and mobilized the people, and the people have made their voices heard. The corrupt regime is falling, and a democratic alternative is here to replace it.