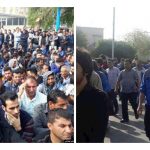 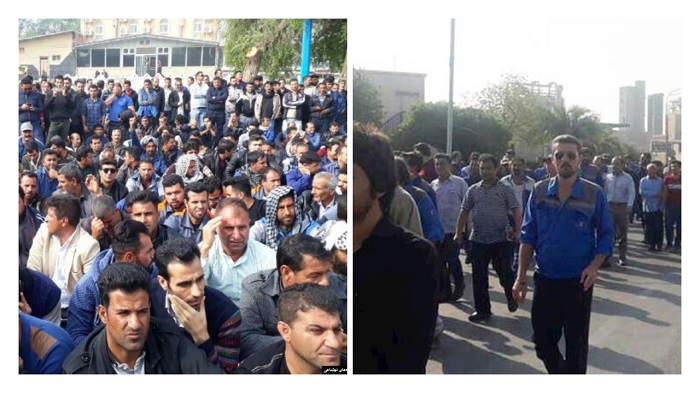 Workers from the Mahshahr petrochemical Complex and workers from other sectors continue protest against the poor working condition.

There has been a great deal of unrest in Iran in recent months. Starting mid-November last year, people have been taking to the streets across the country. Many were protesting the huge hike in fuel prices and others continued to protest against widespread corruption and the regime’s meddling abroad. 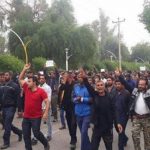 Workers Pay the Price of the Regime’s Disastrous Economic Policies

Iran’s economy is on the verge of collapse, and the situation becomes direr each day. Although the crisis has created fear and chaos among regime leaders, who fear that they might lose their tenuous claim to power, Iranian workers have borne the brunt of the crushing effects of the economic devastation.

According to the Assistant Head of the East Azerbaijan Coordination Center for Islamic Labor Councils, Iranian workers only earn enough to cover 28% of their essential needs, defined as food, shelter, and clothing.

This man says he has to gather & sell trash to put food on the table.
"Death to khamenei, Death to the president…"
Over 80% of #Iran 's population lives in poverty, thanks to the mullahs' destructive policies of spending billions on foreign warmongering, ballistic missiles &.. pic.twitter.com/aCezvMeB8O

Regime official Faramarz Tofighi described these conditions in grim terms. “80 percent of the workers are living beyond the death line,” he said.

The death line is below the absolute poverty line and is defined as the point at which a person can no longer afford even the most basic items needed for survival. Workers and their families have been driven to take out loans with high-interest rates, sell their organs, and dig through public trash cans for food. A growing number of Iranians have been driven to suicide because of extreme poverty and a lack of hope for the future. Iran has been rated as one of the unhappiest countries in the world.

The already disastrous conditions are deteriorating even further as prices for basic goods rise on a daily, and sometimes hourly basis. Workers who already live in poverty have been forced to protest for paychecks that have been delayed for months. Many workers have been downgraded from permanent employees to temporary or contract workers, causing further hardship.

In a November 2018 interview with the state-run ISNA news agency, Davoud Mirzaie, an expert on the Iranian economy, said that Iran’s workers have lost 80% of their purchasing power due to the plummeting value of the Iranian rial. He added that the regime’s efforts to remedy the situation have failed.

“The 19.5 percent wage increase has not shown itself in the workers’ lives, meaning the value of their wages in March 2018 is far below its value in March 2016. In other words, the workers’ purchasing power has decreased between 50 to 80 percent. This is causing numerous problems for the families of the country’s workers.” He added, “Such conditions have left the workers unable to provide for their basic needs. Therefore, labor unions have time and again called on the Ministry of Labor to see into this issue. Unfortunately, this has remained unresolved,” he said.

The regime’s unjust labor laws have worsened conditions for workers. Iran does not meet any international labor norms or standards and systematically violates workers’ rights. The MEK has repeatedly called for the regime to be held accountable for its oppression of workers and its cruel labor practices and intimidation of workers.

Labor activist Abdollah Vatankhah spoke to the state-run ILNA news agency about the lack of protection afforded to workers under regime law.

Workers are among the commoners paying the price for the mullahs' destructive policies in #Iran.https://t.co/e6W8VUJvLN

“The laws do not protect the working class and the government refuses to take responsibility and has abandoned us,” he said. “Policies such as privatization have destroyed our lives.”

Vatankhah said that the regime was gradually removing policies meant to support the working class, thus “plundering public property under the name of privatization.”

“Workers have been abandoned. Such actions will cause workers to cry out and protest,” he warned.

“This is why you can hear the cries of workers in Haft Tappeh, HEPCO, and the Ahvaz Steel company. By removing its support, the government has made life harder for workers whereas an investor has no problem in terms of providing medicine and can provide drugs from the heart of foreign countries if he needs to,” he added.

Vatankhah was referring to policies such as the recent decision by the High Insurance Council to exclude foreign chemotherapy drugs from Iran’s health insurance. While proponents of the policy argue that the change will boost domestic production, working-class families who rely on this insurance worry that it will the endanger lives of impoverished families.

Approximately 11 million insured workers in Iran face serious health problems. Some chemotherapy medications cost between two and three million tomans. Workers who make 1.4 million tomans per month at most are unable to access these life-saving drugs.

The regime responded to these protests with brutal suppression, arresting dozens of labor activists and trade union members for their roles in the peaceful demonstrations.

Labor activists Jafar Azimzadeh, Secretary of the Board of the Free Workers Trade Union, and  Esmaeil Bakhshi, spokesman of the Haft Tappeh Sugar Plant Workers Trade Union, are currently imprisoned. Teacher activists Esmaeil Abdi, Mahmoud Beheshti Langarudi, Mohammad Habibi, Rouhollah Mardani, and Abdul Reza Qanbari are also languishing in the regime’s prisons. All of these activists have been accused of “security crimes” after being organizing demonstrations or union activities. Habibi was additionally sentenced to lashes.

Iranian law does not recognize the right to create labor unions that are not sanctioned by the regime. As a result, trade union members are subject to harsh sentences for their efforts to support workers’ rights.