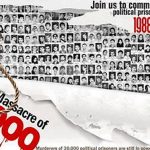 Written by Admin on August 31, 2019. Posted in Imprisonment & Executions, NEWS 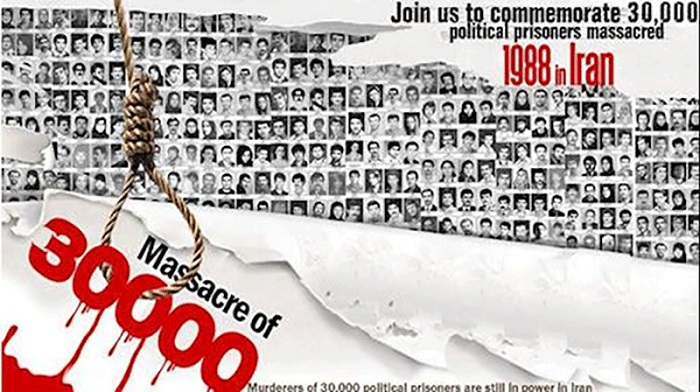 August 30th marks the International Day of the Victims of Enforced Disappearances. Amnesty International issued a statement in regard to this day.

“The Iranian authorities’ continued failure to disclose the fate and whereabouts of thousands of political dissidents who were forcibly disappeared and extrajudicially executed in secret during Iran’s 1988 prison massacres has sparked a crisis that for decades has been largely overlooked by the international community,”

The statement refers to the 1988 massacre of over 30,000 political prisoners, mostly members, and supporters of the main Iranian opposition, the People’s Mojahedin Organization of Iran (PMOI), Mujahedin-e Khalq or MEK.

Statement by @AmnestyIran on #1988Massacre in #Iran: It is misguided to view the 1988 mass killings as historical events. The enforced disappearances are ongoing &, 30 years later, victims’ families continue to be tormented https://t.co/dTMvR7nntR

On July 15, 2019, a number of survivors of the massacre testified in a conference held in Ashraf 3 in Albania.

Majid Sahebjam, a MEK member, who was in prison for 17 years for supporting the MEK was one of the witnesses.

“My crime was supporting the MEK. I witnessed many human rights violations. The 1988 massacre was a premeditated and well-planned crime. Some of the people who were directly involved in this crime still hold high positions of power. The regime has done everything in its power to hide its crime. In the short trials, which lasted only a few minutes, the judges only asked one question: They asked about the political association of the defendant. Uttering the word “Mojahed, MEK member” was enough to seal the fate of the prisoner and send him to the gallows…I know at least 20 families who lost two of their children to the regime’s executioners. Many of the executed prisoners were aged 14, 15, and 16 when they were arrested. During the 1988 massacre, dozens of MEK supporters had served their sentences. However, they were kept in prison because they would not repent their support for the MEK. They were executed in 1988 because of their dedication to freedom and human values,” Sahebjam addressed the conference.

“Many of my friends were teenagers when they were arrested. They spent many years in prison and were finally executed. People had served their sentences, and their families were waiting for them. However, they never got to see them. One of my friends was executed five years after his sentence was finished. He was taken to the gallows only because he defended the name of the MEK,” Royaie said. “Some of these families are still staring at the pictures of their loved ones and crying after 30 years. Some lost their sanity when their children were executed. The regime even executed the disabled and handicapped. Yet they stood tall when they went to the gallows. One of my friends had lost his mind due to tortures. However, when they took him to the judge, he stood tall and said, “I’m a Mojahed, MEK member.” He was executed.”

Kobra Jokar, a MEK member also addressed the conference. She managed to escape from prison before the massacre.

“I was in the regime’s prisons for six years. The Revolutionary Guards (IRGC) arrested me while I was pregnant. I was taken to Evin prison and the torture chambers. I was transferred to Ward 209. In the cell, I saw four torturers torture my husband in front of me. They also tortured me in front of him,” She said.  “A few days later, they executed him with 75 others…The regime executed 50 pregnant women, including Masumeh, the sister of Mrs. Maryam Rajavi…I managed to escape prison in 1987. One year later, all of those ladies who shared the cell with me were executed in the 1988 massacre.”

Mostafa Naderi, a MEK member shared his story and said:

“I spent 11 years in prison, five of those years in solitary confinement. During the 1988 massacre, I was hospitalized because of torture. I was unconscious when they called my name for execution, and this is how I survived. In the beginning, they said nothing of the executions, claiming the prisoners were going for family visits. In many smaller cities, not even a single person survived to tell the story of the massacre. In prison, I was severely tortured. After eight months of torture, I and five other prisoners were taken to a mullah who said we would be executed that night. They took us to the place for execution. They tied our hands and we heard the guns being loaded. They fired, but they aimed a bit higher than our heads. We suffered a traumatic experience. One of the prisoners fainted and another lost his eyesight. The 1988 massacre was planned from two years before. However, the massacre continues to this day. We must stop this.”

The time has come for the United Nations to launch an international independent fact-finding mission to determine the fate of victims of the 1988 massacre in Iran.