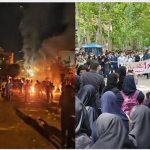 Written by Mohsen Aboutalebi on December 29, 2022. Posted in NEWS 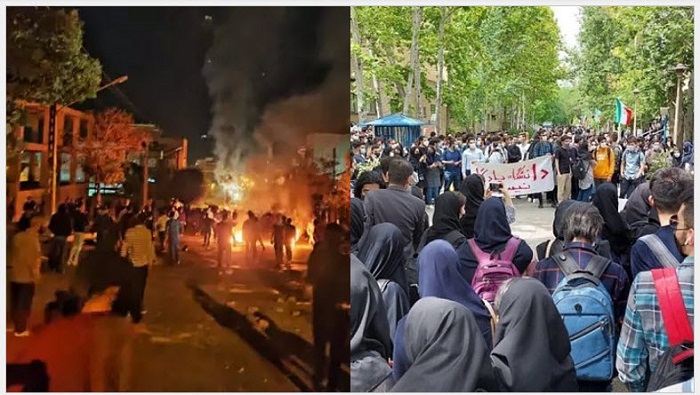 On Tuesday, Iran’s nationwide uprising marked its 103rd day, following a day of various ceremonies in various cities in memory of people killed by the mullahs’ regime over the previous 100 days. The regime’s forces have killed over 750 people and arrested over 30,000. The MEK has released the names of 601 protesters who were killed.

On Tuesday morning, people gathered in Tabriz, northwest Iran, to mark the 40th day since the mullahs’ regime killed Aylar Haghi, a medical student, during the recent protests. Participants started chanting anti-regime slogans such as “Khamenei is a murderer!” His rule is unconstitutional!” As the massive crowd grew in size, authorities dispatched a large number of security units to the scene to prevent any signs of anti-regime protests. According to local activists, at least three young people have been arrested, including Aylar’s father.

In Tabriz, a group of Jamaran Housing Cooperative members protested the cancellation of their general assembly and officials’ refusal to evaluate the credentials of a specific CEO candidate. A large crowd gathered in Mahabad to remember three protesters who were killed by the mullahs’ security forces. Mourners were heard yelling anti-regime slogans. Protesters have also taken to the streets, establishing control with roadblocks.

A similar ceremony was held in the northwest Iranian city of Bukan for another protester killed by mullah security forces. This ceremony’s participants began chanting, “Martyrs don’t die!”

On the 102nd night of the ongoing revolution, people in the city of Mahabad took to the streets and continued their protests against the mullahs’ regime. Locals in some parts of the restive city have been seen erecting roadblocks and seizing control of their streets in order to prevent authorities from dispatching security forces.

Locals in Tehran’s Jannat Abad district took to the streets late at night to launch an anti-regime rally, chanting “Death to the dictator!”Workers at the Abadan petrochemical site in southwest Iran went on strike on Monday morning, protesting threatening letters sent to colleagues who had recently participated in protest gatherings. As a result of the strike, the complex was closed down around noon local time.

According to other reports, students at a school in Saqqez, Mahsa Amini’s hometown, are boycotting classes in solidarity with the countrywide protests.

The President-elect Maryam Rajavi of the National Council of Resistance of Iran (NCRI), commented on the mullahs’ regime’s atrocities, which know no bounds and show no mercy even to children.

On the 40th day after security forces killed #KianPirfalak, the courageous youths and people of #Izeh condemned the main culprit behind the coldblooded murder of this innocent child and hundreds of other children and youths in #Iran with chants of “death to Khamenei.” pic.twitter.com/J4QBNSvYq1

“On the 40th day after security forces killed Kian Pirfalak, the courageous youths and people of Izeh condemned the main culprit behind the coldblooded murder of this innocent child and hundreds of other children and youths in Iran with chants of ‘Death to Khamenei!’” the NCRI President-elect said.