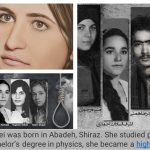 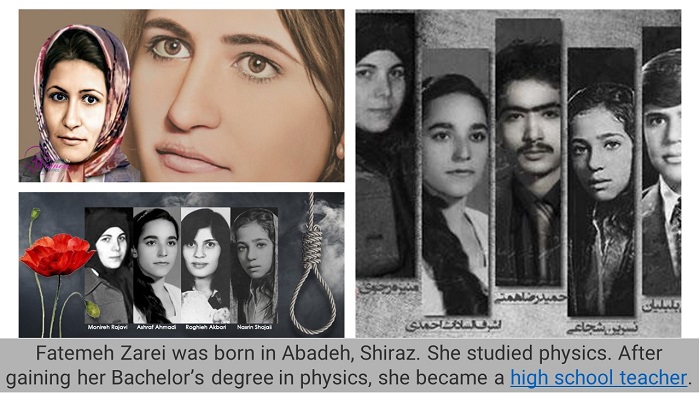 (PMOI / MEK Iran) and (NCRI): Fatemeh was arrested by government mercenaries who knew her and were aware of her active engagement in the demonstration.

Fatemeh Zarei was born in the Shiraz city of Abadeh, her recognized humanitarian nature was the cause for her nomination as a People’s Mojahedin of Iran (PMOI / MEK Iran) candidate for the first parliament in Shiraz following the 1979 revolution. The misogynous reactionaries couldn’t stand it, so they rigged the election to prevent her from being elected.

Massive protests against the murders of MEK

Massive protests against the murders of MEK members and supporters took place across Iran in the months leading up to June 20, 1981, when Khomeini’s guards opened fire on peaceful protestors in Tehran.

On June 17, 1981, one of the demonstrations took place in Shiraz. Many female MEK supporters gathered in Shiraz Vakil Bazaar on this day to protest the manner in which regime agents confronted their fellow Iranians. Fatemeh Zarei was one of the organizers of this massive demonstration. Fatemeh was arrested by government mercenaries who knew her and were aware of her active engagement in the demonstration.

Fatemeh Zarei was incarcerated on June 20, 1981, at the start of the just nationwide resistance to the Islamic dictatorship. Fatemeh was brutally tortured, yet she stood firm in her refusal and became a national symbol.

(PMOI / MEK Iran) and (NCRI): On June 17, 1981, one of the demonstrations took place in Shiraz. Many female MEK supporters gathered in Shiraz Vakil Bazaar on this day to protest the manner in which regime agents confronted their fellow Iranians.

Fatemeh was in dire health condition

“Fatemeh was in dire health condition due to the torture she had endured,” noted an eyewitness to Fatemeh’s courage in prison. She had been beaten so hard by the [prison guards] that she had contracted contagious infections. [The jail authorities] held her in solitary confinement to prevent anyone from assisting her. Nobody was allowed to communicate with her.”

Inside the prison, MEK members and supporters were organized, and Fatemeh was part of this hierarchy. She was a symbol of defiance in the face of torture and other forms of oppression. She would not forget two things under any circumstances: maintaining a relationship with the other convicts and studying and monitoring political and ideological problems. She formed bonds with other tenacious inmates and attempted to boost morale among newcomers. She felt a sense of responsibility for them. She was so cheerful and vibrant that any new inmate recognized and trusted her right away.

Prison guards restricted Fatemeh’s visitation rights in preparation for the 1988 massacre of political prisoners. Clothing, food, or money would not be accepted by the henchmen in exchange for her. “We don’t know,” they said in answer to her family’s questions. “Nobody with that name is jailed here.”  Her family was referred to the prosecutor’s office after they continued to inquire about Fatemeh. This brutal process kept going on until the late fall of 1988.

On December 4, 1988, it was finally determined that Fatemeh had perished in the massacre. Employees at the cemetery informed her family that she, along with 300 others, had been executed.

Fatemeh and Fattaneh were part of a generation of women who gave their life for their country’s liberation. They will be remembered forever, and their names will serve as a beacon for those fighting for freedom and equality.