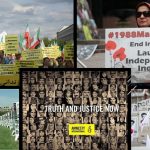 MEK: Perpetrators of Iran’s 1988 Massacre Need to be Brought to Justice

The National Council of Resistance of Iran (NCRI), and the People’s Mujahedin of Iran (PMOI / MEK Iran) reported that the perpetrators of the 1988 massacre in Iran of political prisoners are still at large in Iran, some of them occupying important positions in the regime. They must be brought to justice, even if it is over 30 years since they oversaw the death commissions that resulted in the executions and mass burials.

According to Amnesty International, the letter sent by seven UN human rights experts in September last year was a “momentous breakthrough.” The letter was sent to the regime itself, but its contents made public after it was sent.

To recap what happened back in 1988, it was when the Supreme Leader, Ruhollah Khomeini, Ali Khamenei’s predecessor, was under pressure from the Mujahedin-e Khalk MEK, who opposed the mullahs’ dictatorship in the same way that they had opposed the dictatorship of the Shah before.

Khomeini issued a fatwa against the MEK and thousands of their members and supporters were rounded up. The death commissions, a sort of kangaroo court, led to 30,000 executions. The dead bodies were buried in hastily dug mass graves by bulldozers.

Even now, the families of most of those who were killed do not know where their loved ones are buried. Khomeini’s chosen successor, Ayatollah Montazeri, was put on house arrest as he stated his opposition to the fatwa and its consequences.

The Iranian regime may not have slaughtered quite as many as it did in1988, but the repression, arrests, torture, and executions continue today. The international community has long turned a blind eye to what is going on in Iran and seems disinterested in uncovering the truth about the 1988 massacre.

The letter by the seven human rights experts has not yielded any real results. The signatories realized that although the international community was aware of the atrocity, nothing came of it in terms of action by the U.N. or any of the western governments of the day.

The failure by the world’s leaders then as now has not just allowed killers to remain in key positions in the Iranian government, but it has sent a strong message to Iran that it can continue with the level of human rights abuses it has been carrying out with impunity.

The world must realize that continuing with an appeasement strategy will ultimately backfire as it gives carte blanche for the regime to carry out terrorist attacks outside of Iran’s borders as well as vicious repression within Iran itself.

Europe is trying to revive the failed nuclear deal, known as the JCPOA. By turning a blind eye to Iran’s worst excesses, it thinks that this will mean that Iran will sit down at the negotiating table and sign up for a new version of the 2015 agreement.

This is a very naïve attitude and will only result in tears. E.U. leaders should have taken more notice of what little regard to European security the regime in Iran has after the conviction of the mullahs’ own di0lomat in Antwerp the other week on a terrorism charge. Assadollah Assadi was caught red-handed passing over explosives to his two accomplices that could have killed many hundreds of people at the 2018 Free Iran Rally staged in the heart of Europe, near Paris.

(NCRI) and (PMOI / MEK Iran): high ranking officials of the Iranian regime who are responsible for crimes against humanity, and were a member of the “Death Committee” during the 1988 massacre of MEK supporters, but enjoy impunity and have actually been promoted to higher positions within the mullah’s ranks.