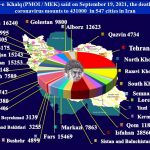 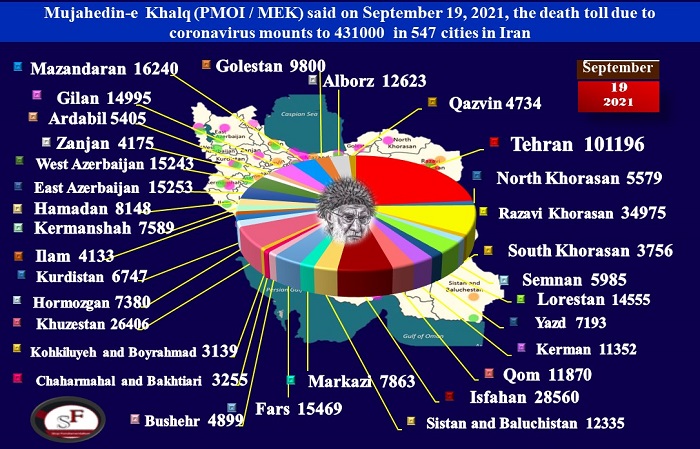 The National Council of Resistance of Iran (NCRI), and the People’s Mujahedin of Iran (PMOI / MEK Iran), 431,000 people had died in Iran as a result of the Covid-19 outbreak as of September 19.

The Covid-19 death toll was one of the topics addressed in Iran’s media on Wednesday. The regime’s manipulated coronavirus statistics are now widely acknowledged to be well off the mark when it comes to fatality and infection rates.

On September 14, the state-run Jahan-e Sanat daily reported, “A few weeks ago, Kourosh Holakouee Naeini, a professor of statistics and epidemiology at Tehran University of Medical Sciences, claimed that the Covid-19 death toll in Iran was seven times higher than the official figure. However, the former Minister of Health acknowledged the difference between the actual statistics due to media pressure. He lowered this difference to 2.5 times,”

According to Jahan-e Sanat, Massoud Pezeshkian, a member of the parliamentary health commission, the death toll on Wednesday was “the actual daily death rate from Covid-19 is more than 1,200.”

“The true death toll from coronavirus is unquestionably higher than the Ministry of Health’s estimates. Ironically, a former Deputy Minister of Health recently stated that the real [death toll] is double the official figures. The Ministry of Health members announced a few days later that the true number was 2.5 times greater than the announced statistics,” Jahan-e Sanat wrote.

(PMOI / MEK Iran) and (NCRI): COVID-19 fatalities in 547 cities exceed 431,000. Tehran is in crisis as long as we don’t have a national system to evaluate mutated viruses, we will always be facing threats and we need to definitely provide measures to have an immediate and timely response,” said a senior health official in Tehran.

“The continuation of the Covid-19 crisis and the increase in casualties, the lack of coordination between the people and the government, disagreements among decision-makers, the resignation and dismissal of officials, and the intensification of public distrust of the system,” according to the Aftab-e Yazd daily on September 15, could have “negative consequences” for the regime.

Iran’s worsening economic crisis was another matter that Iran’s state media only partially acknowledged. Inflation and soaring prices have resulted from the regime’s entrenched corruption, incompetence, and misuse of the country’s resources.

“Milk prices have been rising since June 2019, according to Iran’s Statistics Center, especially after the parliament increased milk prices. If we consider that the price of a liter of milk in 2019 was 4,500 tomans, it is now between 12 and 14 thousand Tomans,” Jahan-e Sanat wrote.

The state-run Javan daily, which is tied to the Revolutionary Guards (IRGC), reported that “banknote printing has reached a point where Massoud Mir-Kazemi, the new chief of the Planning and Budget Organization, complains about it”. Mir-Kazemi falsely stated that banknote printing should be abolished, and his remarks were derided by the Javan newspaper.

“We should ask Mir Kazemi how he plans to eliminate the creation of about 100,000 billion tomans per month when the government has a budget deficit of over 500 trillion tomans this year and banks have the privilege of paying interest on depositors’ accounts!” In this regard, Javan wrote.

(NCRI) and (PMOI / MEK Iran): Economy: The Toman losing more than half its value.

Iran’s society has become a powder keg as a result of its economic and social issues. The administration’s willful ignoring of people’s problems and making empty promises has increased public resentment of the regime. The current circumstance caused Ebtekar daily to issue a public warning to regime officials on Wednesday.

“The worrying thing is that people’s old wounds open up, and people may react restlessly. If these reactions are combined, there will be serious and fundamental concerns [for the system],” Ebtekar daily cautioned officials.