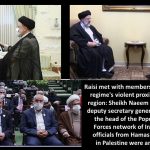 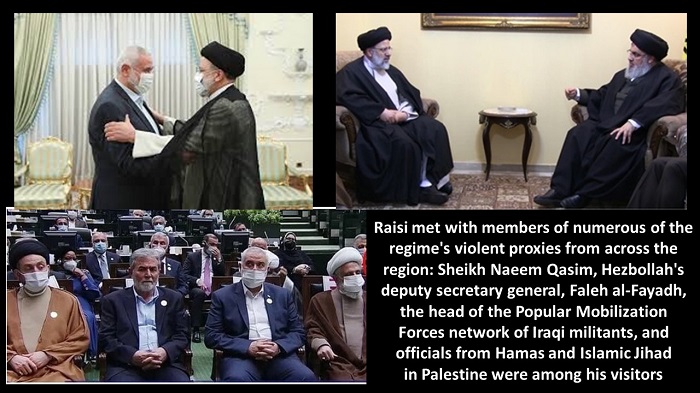 (PMOI / MEK Iran) and (NCRI): Raisi met with members of numerous of the regime’s violent proxies from across the region.

The Iranian regime’s new president, Ebrahim Raisi, was sworn in last Thursday. Raisi met with members of numerous of the regime’s violent proxies from across the region the next day, as one of his first formal acts in office.

Sheikh Naeem Qasim, Hezbollah’s deputy secretary-general, Faleh al-Fayadh, the head of the Popular Mobilization Forces network of Iraqi militants, and officials from Hamas and Islamic Jihad in Palestine were among his visitors on that day.

Raisi also met with Mohammad Abdul Salam, a special envoy from Yemen, two days before the official inauguration. Iran has been supporting the Houthis in Yemen’s years-long civil conflict, which has seen them depose the country’s internationally recognized government.

Raisi’s early efforts to prioritize regional militancy and terrorism reflect popular expectations that his administration will oversee a general intensification of the regime’s nefarious operations, both domestic and foreign policy.

Because Raisi’s reputation has long been defined by contributions to internal political repression, the former was a more evident assumption.

(PMOI / MEK Iran) and (NCRI): Iran backed militia stormed at the US Embassy in Baghdad, Iraq. The attack was orchestrated by terrorists – Abu Mahdi al Muhandis and Qays al-Khazali – and abetted by Iranian proxies – Hadi al Amari and Faleh al-Fayyad. All are seen outside the embassy.

Raisi as one of four members of a “death commission”

As one of four members of a “death commission” founded in Tehran in response to the regime’s founder and first supreme commander, Ruhollah Khomeini’s fatwa addressing political dissidents, he played a crucial part in the execution of over 30,000 political detainees in the summer of 1988.

The legacy was renewed

That legacy was renewed in recent years when new information about the massacre emerged in the form of an audiotape made by Hossein Ali Montazeri, the only religious authority who objected to the executions at the time.

This led a number of regime officials, including Raisi, to publicly defend their role in the genocide, typically referring to the death sentences, which were often delivered down in under few minutes, as “God’s command.”

As the administration was rocked by two nationwide uprisings and a succession of subsequent large-scale protests from December 2017 onward, this mentality obviously underpinned the regime’s approach to cracking down on dissent.

(NCRI) and (PMOI / MEK Iran): Ayatollah Montazeri, regime’s ex-Supreme leader’s heir, in a taped message revealed the extent of the massacre of the MEK supporters, calling it “the greatest crime committed in the Islamic Republic, for which history will condemn” the mullahs ruling Iran.

Approximately 1,500 protesters were killed by regime forces within days of the second uprising erupting across roughly 200 areas in November 2019. Ebrahim Raisi was the head of the judiciary at the time, and in that capacity, he oversaw the policy of mass arrests and widespread torture that followed the killings and lasted for months.

Raisi operated as the administrator of a so-called religious foundation named Astan-e Quds Razavi, which directed the foundation’s immense financial resources into a range of ostensibly religious and cultural enterprises that served as the foundations for militant recruiting.

During his time as caretaker, Raisi helped to expand AQR’s relationship with significant terrorist organizations. Raisi came to Lebanon in early 2018 to congratulate the country’s leaders.

He hosted Qassem Soleimani, then-commander of the Revolutionary Guards’ international special operations division, the Quds Force, in July of that year.

Raisi stood immediately behind Iranian Supreme Leader Ali Khamenei at the mourning service after Soleimani was killed in a US drone strike in January 2020, bolstering his image as someone with extensive ties to the elite power structure and a probable successor to Khamenei. 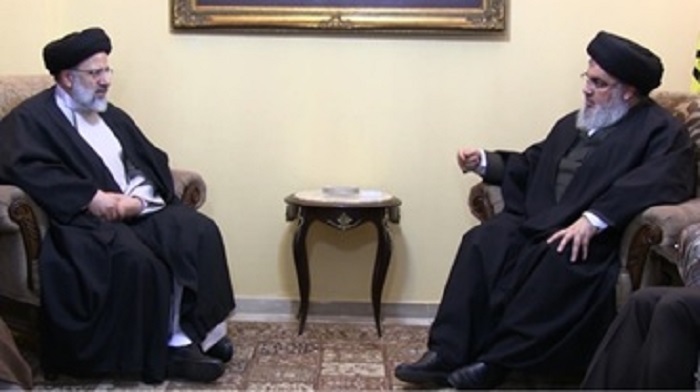 (NCRI) and (PMOI / MEK Iran): Raisi met with members of numerous of the regime’s violent proxies from across the region.