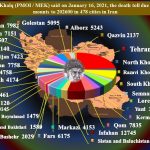 Written by Amineh Qaraee on January 17, 2021. Posted in NEWS 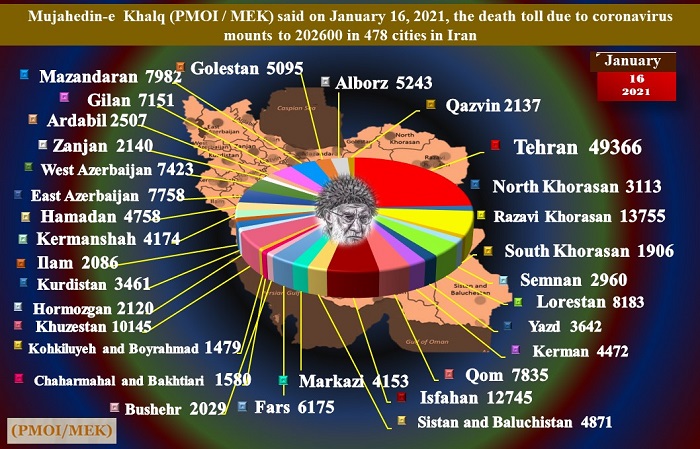 The coronavirus has taken the lives of over 202,100 people throughout Iran, according to the Iranian opposition (NCRI) and (PMOI / MEK Iran).

The Iranian opposition, the National Council of Resistance of Iran (NCRI), and the  People’s Mojahedin Organization of Iran (PMOI / MEK Iran) says that over 202,600 Iranians have now died from Covid-19, making Iran the worst country in the world for the number of fatalities per capita. The (NCRI) and (PMOI / MEK Iran) figures are in stark contrast with those of the Iranian regime, which are four times smaller.

More than 202,600 people have died of the novel #coronavirus in 478 cities checkered across all of Iran's 31 provinces, according to the Iranian opposition PMOI/MEK.

According to the NCRI’s president-elect, Maryam Rajavi, the death toll in Iran is a “catastrophe.”  She says that the terrible figures are due to the regime’s prioritizing its nuclear research over helping to contain the spread of the virus. She has pointed out that Iran’s Supreme Leader, Ali Khamenei, is only going to make this miserable situation worse by banning any vaccines from Britain or the U.S. as he thinks they are “untrustworthy.”

As Maryam Rajavi  said about the vaccine decision: “Khamenei and the Islamic Revolutionary Guard Corps have sent the Iranian people to the killing fields of Coronavirus, (and) by banning the import of vaccines they are creating even a bigger disaster.”

What is the Future of the #Iran Nuclear Deal? #NCRI and the #MEK reported that the Iranian regime has systematically violated the terms of the Joint Comprehensive Plan of Action (JCPOA), or the 2015 Iran nuclear deal as it is known, since the beginning. https://t.co/LwttBjH4xm

Coronavirus crisis as a barrier against another uprising

The Paris based NCRI Foreign Affairs Committee member, Ali Safavi, thinks the regime in Iran is doing what it can to take advantage of the transition in the presidency in the U.S. and European indecisiveness, but the policy is going to end up with more deaths as no effective vaccine will be rolled out. According to Safavi, the regime is trying to use the Covid menace to cower and control the Iranian people.

“This puts the people of Iran at tremendous risk and is a crime against humanity. It goes to show that Khamenei wants to use the coronavirus crisis as a barrier against another uprising like the one we saw in 2019. Otherwise, why would he prevent the import of vaccines? After all, Khamenei had no problem purchasing weaponry and other goods from the US and Europe in years past, because those purchases served his purposes,” he said.

Contradictions in what Khamenei is saying

Safavi points out the contradictions in what Khamenei is saying. The regime was happy to buy European and US planes under the 2015 Joint Comprehensive Plan of Action (JCPOA), but now is pretending to be suspicious of vaccines that have been approved for use elsewhere.

Safavi says: “The death toll from the coronavirus in Iran has surpassed 202,600, which is a staggering figure in the sense that Iran ranks first in terms of per-capita fatalities. Alongside this, the regime has refused to provide any meaningful financial assistance to the millions of Iranians who have lost their jobs and cannot go to work because of the (pandemic). It is a crime against humanity and I think it is high time for the international community to get involved and do something about it.”

Safavi’s view is that Iran is more interested in exploiting the shift in political power in the U.S. and is using its tactics of blackmail to get the U.S. under Biden back to the table over the JCPOA despite the fact that the regime’s proposed enrichment plans clearly breach the agreement.

When the previous administration in the US withdrew from the JCPOA in 2018 they imposed strong sanctions on Iran. Biden may very well decide to drop some or all of the sanctions in exchange for the renewal of the JCPOA.

#NCRI and #MEK #Iran) reported that Iran had started to enrich uranium to 20% at its Fordow nuclear site before the Islamic Revolutionary Guard Corps (IRGC) last Monday illegally hijacked a South Korean ship in the Persian Gulf. https://t.co/elqrjXaqqR

Safavi thinks that both the Biden administration and the EU should get tough on Iran and demand immediate attention to the breaches in the agreement. The regime should be told to abandon any form of terrorism, stop nuclear enrichment and development, prevent terrorism, and covert control outside of Iran’s borders. The mullahs should also agree to stop any kind of physical or mental repression and violence within Iran against their own people.

Safavi added: “the regime uses executions as a means to instill an atmosphere of terror and repression inside the country. We also feel the EU and the US should begin addressing one of the most heinous crimes that were perpetrated by this regime: the 1988 massacre of 30,000 political prisoners.

No amount of political and economic concessions to this regime will moderate its behavior. So long as you remain silent, so long as you do not take any action, that will only embolden the mullahs to continue their policies — and of course, the primary victims of this policy are the people of Iran, who are suffering every day. More and more Iranians are dying.”