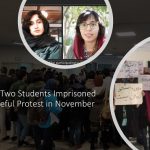 Written by Esmail Mohades on November 19, 2020. Posted in NEWS 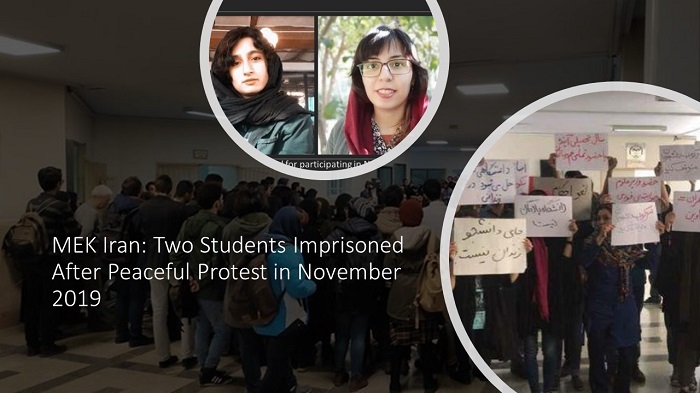 The (PMOI / MEK Iran) and (NCRI) sources in Iran report numerous human rights violations over the past few months as part of the regime’s crackdown on political dissent.

University of Tehran student, Marjan Eshaghi, has been sentenced to a 12-month prison term and a suspended 4-year prison sentence, by Branch 15 of the Revolutionary Court on the anniversary of Iran’s most bloody challenge to the regime since the 1979 revolution.

The Women’s Committee of the National Council of Resistance of Iran (NCRI) reported that many Iranian student activists sentenced for participating in November 2019 protests.

Why support this repressive regime?

Stand with the PEOPLE OF IRAN and not the mullahs!

The charge laid against Marjan Eshaghi, which can be appealed, was “assembly and collusion against national security through participation in student rallies in November 2019.”

1500 were killed while thousands were arrested at that uprising. Reuters confirmed in a special report on December 23, 2019, about the deadly crackdown on November nationwide protests in Iran the death toll of 1500 that was announced by the People’s Mojahedin Organization of Iran (PMOI / MEK Iran) on December 15, 2019.

Eshaghi was arrested by the Revolutionary Guard Corps (IRGC) with other students when attending a rally at the University of Tehran on November 17, 2019.  She was taken to the notorious Evin Prison where she was interrogated for 18 days and when released on bail on January 22nd, 2020. Tried at the same time were 2 other university students. One was called Saha Mortezaei who was the former chair of the Students Trade Union Council (STUC) at the University of Tehran.

The People’s Mojahedin Organization of Iran (PMOI / MEK Iran) and National Council of Resistance of Iran (NCRI) sources in Iran report numerous human rights violations over the past few months as part of the regime’s crackdown on political dissent. The regime has responded to widespread calls for the overthrow of the clerical dictatorship with mass arrests of protesters, torture of political prisoners, and the systematic targeting of (PMOI / MEK Iran) members and supporters.

#Iranian regime has increased the number of arrests of young people in #Tehran, in particular, the family members and supporters #MEK In fact, a report revealed that 389 young people had been arrested and the charge was being a thug.https://t.co/4OihQUgpf3 pic.twitter.com/ZutLneMd7P

On November 9th, 2020, Branch 15 of the Revolutionary Court sentenced Saha Mortezaei to a prison term lasting six years. The charge was assembly and collusion against national security and the sentencing was undertaken by hard-line Judge, Abolqasem Salavati. Her lawyer hopes the draconian sentence will be overturned after an appeal has been lodged. However, when the IGRC has anything to do with these sorts of cases winning an appeal could be difficult. However, the appeals Court Judge, Ahmad Zargar, known for supporting harsh sentences against prisoners convicted of national security crimes has just left his job.

The harshness of the regime can be no better stated than with the case of a 24-year prison sentence for Saba Kord-Afshari, for the campaign she waged against the compulsory wearing of a hijab. She lost the review of the case. The sentence was made up of the following:

She will have to serve 15 years of the sentence.

Hosen Taj, Kord-Afshari’s lawyer, tweeted that when he had learned that her prison sentence, which had been rejected by Branch 36 of the Appeals Court, was going to be enforced, prompted him to ask for a judicial review by the Supreme Court.

Mrs. Maryam Rajavi the President-elect of the National Council of Resistance of Iran’s (NCRI): The world must recognize the Iranians’ legitimate right to topple the ruling regime in Iran and establish freedom and popular sovereignty the regime must be vehemently condemned and held accountable for the slaughter and mass arrests of unarmed defenseless protesters.

.@Maryam_Rajavi : I would like to draw attention of all govs, UN, to report released by AI.
AI points “mass arrests, disappearances &torture” of protesters in Nov2019 uprising &adds that mullahs deliberately used lethal weapons &arrested +7000 ppl in the span of only few days pic.twitter.com/St7BS2Pi21