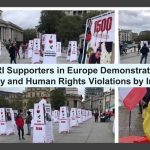 Written by Mohsen Aboutalebi on October 16, 2020. Posted in NEWS 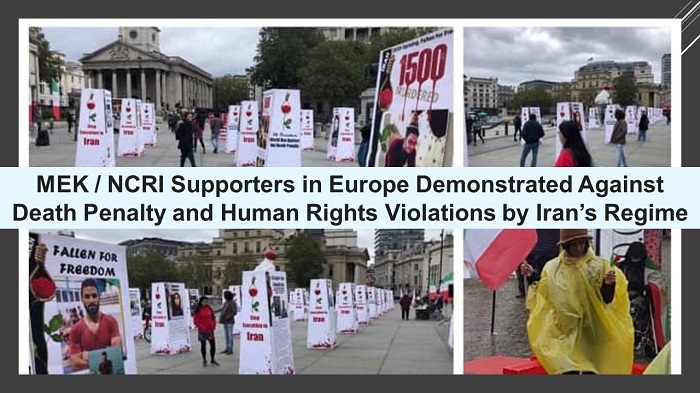 The demonstrations were by supporters of the (NCRI) and the (PMOI / MEK Iran), took place in Britain, Germany, and the Netherlands.

8th October has been designated “World Day Against the Death Penalty,” so supporters of the Iranian opposition NCRI and MEK, used this opportunity to stage demonstrations in several key European cities to protest the use of the death penalty and executions in Iran.

The demonstrations were by supporters of the National Council of Resistance of Iran (NCRI) and the People’s Mojahedin Organization of Iran (PMOI / MEK Iran). Demonstrations took place in Britain, Germany, and the Netherlands.

#WorldDayAgainstDeathPenalty exhibition in #London by the supporters of #NCRI and #PMOI in Trafalgar Square: 120000 political prisoners have been executed by #Iran regime, the biggest executioner per capita in the world #NotoImpunity for the mullahs pic.twitter.com/brofk0v4lt

Iran has one of the world’s highest rates of execution and currently, the regime is using executions to try and subdue the rising anger and dissent in Iran by ordinary Iranians. The protests that the activists MEK Supporters are staging are aimed at persuading European governments to take stronger action against the Iranian regime and condemn its use of the death penalty.

#London Trafalgar Square photo exhibition depicts the cruel executions in #Iran including the victims of 30000 in the #1988Massacre and brave protesters of November 2019 nationwide #IranProtests #NavidAfkari & Mostafa Salehi pic.twitter.com/wBcRdOs7Am

The protesters also called for those responsible for the crimes against humanity in Iran to be brought to justice, in particular those who enabled the execution of 30,000 political prisoners, most of them MEK members and supporters, in 1988.

Anglo-Iranians have set up an exhibition in #London on #WorldDayAgainstTheDeathPenalty The Iranian regime is the no. 1 executioner per capita in the world. Their biggest crime occurred in 1988 when they massacred 30,000 political prisoners. #1988massacre #StopExecutionsinIran pic.twitter.com/XLbt2kfeaQ

In London, Britain, on October 10th, demonstrators displayed photos of some of the executions in Iran, including some of those who were killed in 1988, the protests of November 2019, and more recently Navid Afkari and Mostafa Salehi.

The London demonstration, which took place in Trafalgar Square, revealed the terrible truth that Iran has now become the world’s biggest executioner per capita, with 120,000 political prisoners killed by the regime since it gained power.

Iranians in Britain who were present at the demonstration demanded that governments condemned the Iranian regime for its use of the death penalty and emphasized that the worst crime against humanity in Iran took place in 1988 when 30,000 political prisoners were slaughtered.

In Berlin, Germany, on October 8th, Iranian opposition supporters mounted a demonstration in front of the German Reichstag (Parliament). They called for an end to the death penalty and all executions in Iran. They also called for more support for the Iranian opposition in their legitimate desire for regime change. At the same time, a virtual conference was organized with the title “Executions Means of Keeping Power.”

In #Berlin, Iranians gathered in front of the parliament to call for an end to executions in Iran and to support the people of #Iran in their quest for regime change. #IranProtests #StopExecutionsInIran #FreeIran2020 pic.twitter.com/sUtfUozz7L

In the Hague, the Netherlands, NCRI supporters gathered to protest against the use of the death penalty on October 10th. Demonstrators called for those responsible for the deaths of the 30,000 political prisoners in Iran in 1988 to be brought to justice.