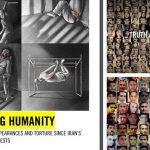 The (PMOI / MEK Iran), martyrs who walked to the gallows by the thousands to uphold the cause of freedom is today the topic of debate in Iranian society.

Amnesty International’s new report, “Trampling Humanity”, published on 2 September 2020, has shocked the world with its details of the Iranian regime’s inhumane treatment of its prisoners.

The report focuses on the regime’s heinous treatment of the protestors during the November 2019 uprising. It recounts the widespread detention, disappearances, and torture that the people of Iran faced for their peaceful protests, based on investigations by Amnesty International and interviews with the victims.

The offenses described in the report may seem shocking to an international reader, however, these crimes have been committed by the Iranian regime for the last 41 years and are unfortunately unsurprising for the Iranian people.

The People’s Mojahedin Organization of Iran (MEK Iran / PMOI) said that there have been at least 1500 killed in the November 2019 uprising in Iran. (MEK Iran / PMOI) also released the names of 504 slain protesters.

On November 25, 2019 thousands of Iranians took to the street in protest after the regime suddenly triple the price of gasoline. The demonstrations, which spread to nearly 200 cities and towns quickly turned into major anti-regime protests.

The protests on 25 November 2019 were initially sparked when the Iranian regime unexpectedly tripled the price of gasoline. Thousands of Iranian people took part in the demonstrations, which turned into widespread anti-regime protests, across nearly 200 cities.

Amnesty International’s report states that Iran’s police and intelligence and security forces arrested 7,000 men, women, and children during and in the aftermath of the protests.

“Amnesty International’s research shows that many of the arrests took place during the five days of protests, but, in the days and weeks that followed, the pattern of mass arrests continued, particularly in provinces that had suffered high death tolls in a context in which the authorities had stationed significant numbers of security vehicles and personnel in public places to deter further protests,” the report read.

An eyewitness interviewed by Amnesty International described the atrocity: “I was on my way to work when I was shot in the stomach. I was in shock and initially thought I had been hit with a stun gun, but then I realized I was bleeding from my stomach. I looked around me and saw many other people had also been shot, in their heads and necks. I had surgery in the hospital to remove the bullet. When I was discharged a few days later, security forces in plain clothes were waiting inside the hospital to arrest me. I was detained for several days and then released on bail. The security forces were arresting everyone after their discharge from the hospital. In the detention center, there were many people with gunshot wounds and other injuries.”

The report further states that hundreds of children across the nation, some as young as 10, were also arrested by the security and intelligence agents in the aftermath of the protests.

Amnesty International interview a teenage protestor who was violently arrested by the intelligence unit of the Revolutionary Guards in Nassimshahr, Tehran, following his presence at the November 2019 protests. He said: “I worked in a shoe factory and was the main breadwinner in our home… My expenses were greater than my income, and seeing my ailing mother and father suffer caused me pain,”

Many protestors who were arrested were also separated and detained incommunicado. They were not allowed any communication with the outside world for up to months after their arrests. The authorities of the regime gave no information to their families about their location or safety. The prisoners were also not able to contact lawyers for legal advice.

Amnesty International revealed that as more of the evidence disappeared, these human rights atrocities would be hard to prove. The #MEK has done a lot to try and force an investigation but this has largely just fallen on deaf ears. https://t.co/NsdkPLYHRJ

Those detained were subject to ill-treatment and torture by Iran’s security and intelligence agents as well as some prison officials. The report accounts the use of torture methods such as floggings, beatings, suspension, blindfolding, or covering the head of detainees with a bag and forcing them into stress positions, 24-hour solitary confinement for up to months at a time and withholding sufficient food, potable water, and medical treatment.

The regime will not stop at using vile torture methods against peaceful protestors. On 30 August 2020, the regime ordered double execution sentences for three brothers, Navid Afkari and his two brothers Vahid and Habib, for their involvement in the August 2018 uprising in Kazerun and Shiraz.

The Iranian regime carried out the death sentence of Mostafa Salehi a month earlier. Salehi had been a protestor in the 2018 nationwide uprising.

I strongly condemn the execution of Iran protester Mostafa Salehi in Isfahan. After million-strong campaigns forced the mullahs to retreat from executing 8 protesters, the regime attempted to retaliate by this execution to terrorize the public and fend off popular upheavals.

The UN and its member states, and international organizations must immediately censure the criminal execution of detained protestor Mostafa Salehi. A visit by an international fact-finding mission to Iranian prisons and prisoners is an ever greater imperative.

More than three decades later, the blood of the victims of the #1988Massacre is roaring across #Iran and inspiring young people. The PMOI martyrs who walked to the gallows by the thousands to uphold the cause of freedom, are today the topic of debate in Iranian society pic.twitter.com/p19479fWNt

This appalling treatment of political prisoners in Iran has been taking place without consequence for decades. The most large-scale case being the 1988 massacre of more than 30,000 Iranian political prisoners. The mullahs have never been held accountable for their crimes in the massacre as it has never been investigated on an international level.

The key perpetrators of the 1988 massacre continue to hold highly ranked official positions within the Iranian regime today. Ebrahim Raisi is currently the regime’s judiciary chief. During the massacre in 1988, he held the role of Tehran’s Deputy Prosecutor and was an important member of Tehran’s “Death Commision”. The “Death Commissions” consisted of a trio of regime officials who performed minutes-long trials for the prisoners who were executed. The current Supreme Leader of the regime, Ali Khamenei, was president during this time.

The lack of response from the international community has allowed the mullahs to enjoy impunity over their crimes against the Iranian people. The lack of accountability has only strengthened the regime’s ability to continue its oppressive and violent methods without repercussions. The path of death and destruction left by the regime will only continue without intervention from the international community.