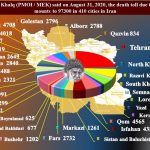 Written by Jennifer Jones-Kelley on September 1, 2020. Posted in NEWS 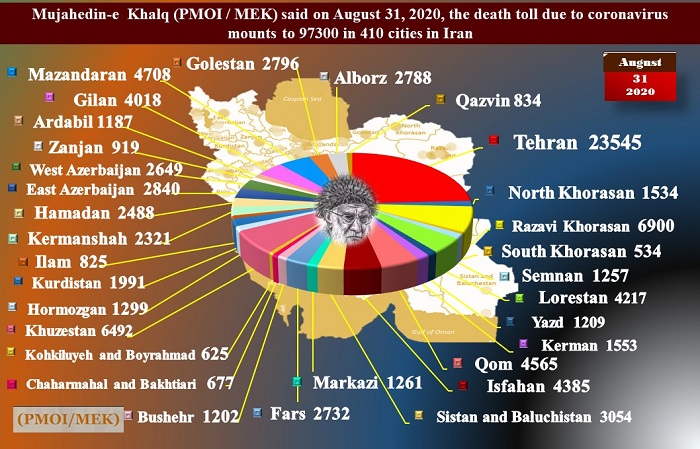 (PMOI / MEK Iran): The key question from the health minister is, why didn’t the Task Force issue any directives to prevent unnecessary trips instead of just whining?

More than 97,300 people in 410 cities in all 31 cities in Iran have died from Covid-19 as of August 31, according to a Monday announcement from The People’s Mojahedin Organization of Iran (PMOI / MEK Iran). The regime has confirmed 21,571 of these deaths or approximately one-fifth of the total fatalities

The MEK reported last week that regime President Hassan Rouhani minimized the impact of Covid-19 in Iran and bragged that leaders of other countries had praised his response to the coronavirus. On August 25, he said, “Three leaders of other countries told me you have set an example in Iran on how to confront the novel coronavirus while continuing your economic activities.”

More than 97,300 people have died of the novel #coronavirus in 410 cities checkered across all of Iran's 31 provinces, according to the Iranian opposition PMOI/MEK.

According to an August 30 broadcast on the Revolutionary Guards (IRGC)-affiliated Fars news agency, Covid-19 infections in Khuzestan Province have shown a dramatic increase over the past two weeks. The head of the Treatment and Sanitization Network in Bandar-e Mahshahr reported, “In the past two weeks, 10-15 percent of coronavirus tests turned out positive. But in the past few days, 90 percent of tests have been positive, which shows an alarming spread of the virus.”

The People’s Mojahedin Organization of Iran (PMOI/#MEK) announced on August 31, 2020, that the #Coronavirus fatalities in 410 cities across #Iran had passed 97,300. #COVID19 https://t.co/cNIHixC6Vy

In the same report, the caretaker at Ardabil Medical Sciences University said that the number of patients at the hospital had increased.

On August 31, the official IRNA carried comments by the spokesperson of the Health Ministry in Charmahal and Bakhtiari Province, who said, “Since May, in parallel with other provinces, Charmahal and Bakhtiary has seen an increase in the number of coronavirus cases and hospitalized patients, which is alarming. Presently, the spread of the virus in this province has reached its peak since the beginning of the epidemic.”

On Tuesday, Massih Mohajeri, the manager of the state-run Jomhurieh Eslami (Islamic Republic) newspaper and presidential advisor to Mohammad Khatami and Ali Akbar Hashemi Rafsanjani, wrote an editorial criticizing the National Coronavirus Combat Taskforce (NCCT) for failing to take necessary steps to safeguard the public health. He wrote: “Those people who ignore the recommendations and requests of health officials and, despite being aware of the coronavirus threat, go on trips, share the blame for the intensification of this threat. But the real blame is on the Coronavirus Task Force, which has issued absolutely no directive to ban travels. The key question from the health minister is, why didn’t the Task Force issue any directives to prevent unnecessary trips instead of just whining? You and the Task Force are responsible for the lives of the people, and no one will accept any shortcomings in this regard.”

The state-run Setareyeh Sobh daily directly attributed the third wave of coronavirus infections to Rouhani and Health Minister Saeed Namaki’s failed policies, writing, “Mr. President… the third coronavirus peak is underway due to weak policies, and the blames for the lives that might be lost due to coronavirus will be on you and the health minister.”

Over 97,300 people have died of the novel #coronavirus in 410 cities #Iran’s 31 provinces, according to reports tallied by the #MEK as of Monday afternoon local time, August 31. The official death count declared by the regime stands at 21,571, around a fifth of the actual figure. pic.twitter.com/M9WSzVrOEI