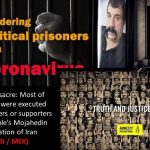 Written by Esmail Mohades on August 25, 2020. Posted in NEWS 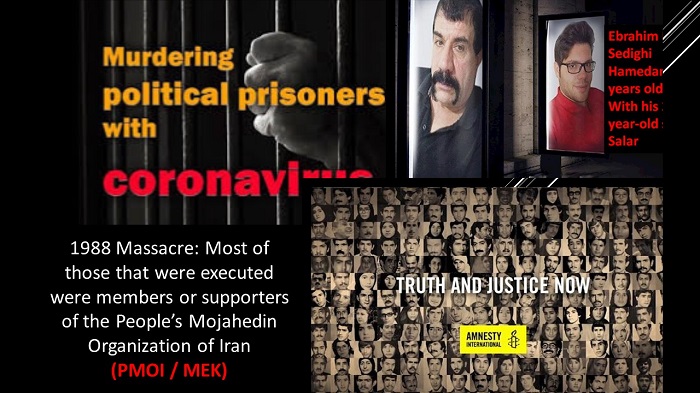 The situation for political prisoners in Iran has been very worrying. Indeed, the regime’s persecution and mistreatment are political prisoners is nothing new – it has been suppressing the opposition in particular supporters of the People’s Mojahedin Organization of Iran (PMOI / MEK Iran) since it took power after the 1979 Islamic Revolution.

One of the most horrific acts against political prisoners was the 1988 Massacre in which the regime extrajudicially murdered 30,000 people in the space of just one summer. Most of those that were executed were members or supporters of the People’s Mojahedin Organization of Iran (PMOI / MEK Iran).

The Iranian regime has never been held to account for the 1988 Massacre and many have said that for as long as it benefits from impunity, the regime will continue to execute political prisoners.

There are many political prisoners in Iran and they all suffer from unfair trials, torture – both physical and psychological, brutality, and the denial of the most basic of rights.

Ebrahim Khalil Sedighi Hamedani is one such political prisoner in Iran. He recently started a hunger strike because his son – Behnam Salar Sedighi Hamedani – has been transferred to a detention center located in the Central Prison of Urmia. His son has been put under a massive load of pressure.

Wednesday was the 10th day of Ebrahim’s hunger strike which started on 9th August and it is still ongoing. He has a number of health and physical conditions that make this hunger strike even more worrying. Ebrahim has diabetes which is not being helped by the physical weakness he is feeling.

Iranian Resistance calls on the UN and international human rights organizations for urgent action to save the life of Kurdish political prisoner Mohi'edin Ebrahimi from an imminent execution.#Iran#HumanRights pic.twitter.com/kSC9dTLVYM

Salar and his father were both physically attacked and beaten by prison officials at the beginning of the month, after which they were transferred to the quarantine section of the prison.

After spending four days there, they were both transferred on 7th August to the Detention Intelligence Center in Urmia where they were interrogated. Salar was held there but his father was taken back to the Central Prison of Urmia. It is not known what condition Salar is currently in.

This is not the first time Ebrahim has been on a hunger strike. He and his son went on a hunger strike in September last year after they were sentenced to 19 years imprisonment. Their charge, entirely bogus, was “measures against national security”.

Last year, the Mrs. Maryam Rajavi President-elect of the National Council of Resistance of Iran (NCRI), the main opposition to the Iranian regime, called on the United Nations’ Secretary-General, the Human Rights Council of the UN, the High Commissioner, and international human rights organizations to take action to release political prisoners. Mrs. Maryam Rajavi also called on these bodies to appoint delegations to meet political prisoners and visit the prisons in which they are being held.

The clerical regime is unable to provide and guarantee the necessary hygienic restrictions inside its prisons. The UN needs to take urgent action to compel the #Iran regime to stop this catastrophe by temporarily releasing all prisoners, including the political prisoners.

It is clear that the Iranian regime needs to be held accountable for its actions. The silence of the international community is essentially to a green light for it to continue with its belligerent acts and suppression of protesters and dissidents. Four decades of impunity is four decades too many.