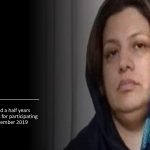 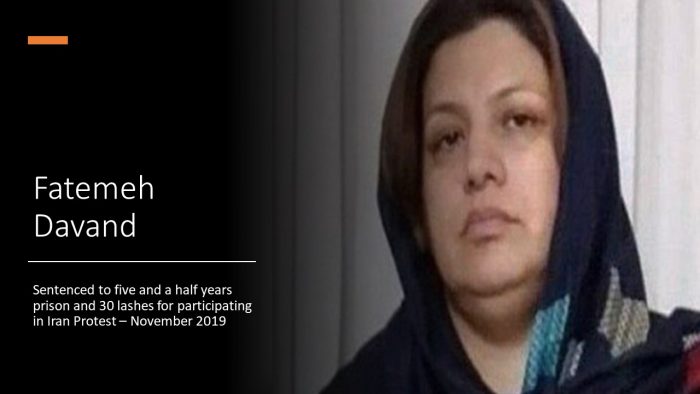 A female protester, Fatemeh Davand, 42 years old with 3 children, has been sent to Urmia  Central Prison for 5 years and 30 lashes.  Her alleged offense is that she took part in the November 2019 protests.

The Iranian Regime went into seven months of silence after the horrific killing of 1500 protestors in November. Learn…

Iranian protests were a series of nationwide civil protests in Iran, initially caused by a 300% increase in fuel prices, but quickly leading to calls for the overthrow of the corrupt mullahs’ regime and its Supreme Leader Ali Khamenei. Based on direct orders of Khamenei, over 1,500 people were massacred in the course of only a few days by the repressive Basij and IRGC forces. The People’s Mojahedin Organization of Iran (PMOI/ MEK) was the first to give accurate reports on mass killings and arrest of thousands of people.

According to a published report on November 25 by the UN Special Rapporteur on Human rights situation in Iran, Javaid Rehman, a parliamentary Foreign Affairs and Intelligence Committee member stated that at least 7,000 protesters were arrested. They were denied any access to their lawyers and the conditions where they were expected to live were far too overcrowded. They were both mistreated and tortured and they were forced to make confessions. As so often happens in these breaches of human rights the perpetrators threaten the media so the brutality of the regime is never truthfully exposed.

On August 6th after the sentencing of Ms. Davand, Amnesty International issued a tweet saying that she had been imprisoned after an unfair trial. They went on to say that the trial was based on confessions that were obtained by torture. Amnesty International urged the Iranian regime to release Fatemeh Devand on the basis that her right to freedom of peaceful assembly had been breached b the arrest and that her sentence had been based on confessions made under torture.

1) Today, Kurdish Iranian woman Fatemeh Davand was summoned to Urumieh prison to serve a prison sentence of 3 yrs & 9 months in connection w/her peaceful participation in the November 2019 protests. She already served a separate 5-month prison sentence in relation to the protests pic.twitter.com/nLtH0fpUnt

Fatemeh Devand is certainly not the only woman to be arrested or killed for protesting. Of the 1,500 protesters who were slaughtered during or after the Novemnber2019 protests, 400 of them were women. At least 12,000 more, based on MEK sources inside Iran, were jailed after being arrested for taking part in the protests.