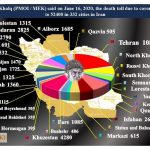 Written by Mohsen Aboutalebi on June 17, 2020. Posted in NEWS 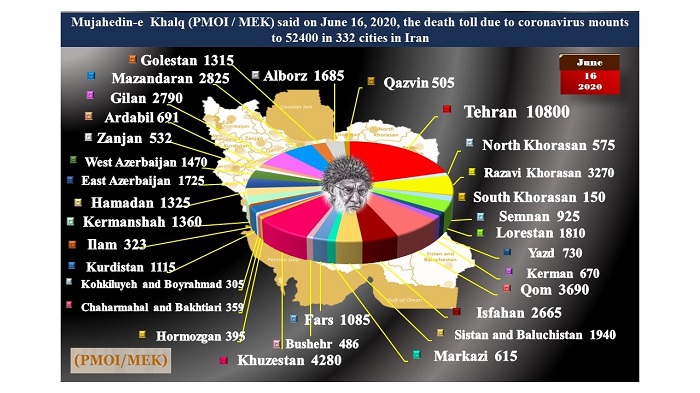 MEK Iran: The Mullahs regime has indeed deceived the people of Iran and the international community.

The Coronavirus health crisis continues to claim the lives of hundreds of Iranians every day. The latest death toll reported by the People’s Mojahedin Organization of Iran (PMOI / MEK Iran) puts the death toll at 52,400. The virus has spread to 332 cities across the country.

However, the regime’s official death toll is much lower than that reported by the (PMOI / MEK). The regime is stating that only 8,950 people have died after contracting the virus that can be deadly to many.

Since the beginning of the outbreak, the (PMOI / MEK), the main opposition to the Iranian regime, has been monitoring the situation with the expectation that the regime would cover up the facts. And the regime has indeed deceived the people of Iran and the international community, as the opposition predicted it would.

The regime’s cover-up of the extent of the outbreak has angered many, with officials from the Ministry of Health contradicting messages from Iranian President Hassan Rouhani. The president declared many areas of the country to be white zones, while several officials and many scientific and health experts have said that no area should be considered free of the virus.

The Research Deputy of the Ministry of Health said that there are major concerns about a second and even third wave of the virus. Reza Malekzadeh said that this will result in an inevitable surge of infections and fatalities.

The country has a Coronavirus Task Force and a member said a few days ago that the virus “was never gone”. Massoud Mardani agreed that a new wave is likely. Another member of the task force, Minoo Mohraz, said that the second wave has begun.

Since the beginning of the outbreak, instead of taking measures to protect the population, the regime has been turning a blind eye to the situation. Doctors, nurses, and other frontline workers have been left extremely vulnerable, not only because of a lack of personal protective equipment (PPE) but also because hospitals have been overcrowded. The health services in Iran were already under strain before the health crisis, so COVID-19 has made an already difficult situation worse.

The regime has endeavored to carry out more testing across the country, but this has not been a successful mission. A worker at the sanitation center at the University of Medical Sciences in Jondishapur revealed that almost a third of the tests taken in Ahvaz has gone missing. He said that 11,000 of 29,000 tests cannot be found.

More than 52,400 people have died of the novel #coronavirus in 332 cities checkered across all of #Iran's 31 provinces, according to the Iranian opposition PMOI/MEK. pic.twitter.com/nJRkPU2oaD

Furthermore, hospitals are still struggling to be able to treat the number of people needing hospitalization. The dean of Abadan Medical Sciences University said that around 300 people are being denied admittance to the Ayatollah Taleghani hospital which has no free beds. He said that the situation is “much worse than what people think” and that there is an increasing number of patients in a critical condition. Furthermore, many of the patients in the hospital are young.

Mrs. Maryam Rajavi is the President-elect of the National Council of Resistance of Iran’s (NCRI). She said:

Forty years of the mullahs’ rule has dismantled the country’s medical, health, and welfare foundations to a large extent, leaving our country and society unable to defend against The Coronavirus.

Forty years of the mullahs’ rule has dismantled the country’s medical, health and welfare foundations to a large extent, leaving our country and society unable to defend against pandemics. #Iran #FreeIran pic.twitter.com/2tHkIlADll