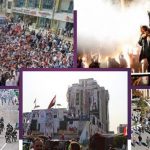 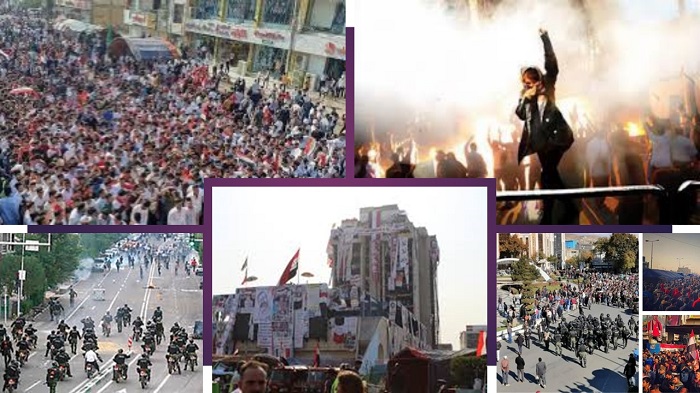 MEK Iran – The Iranian regime is terrified of twin uprisings at the same time in Iran and Iraq.

The uprisings in Iran and Iraq are intrinsically related, according to Struan Stevenson, the coordinator of the Campaign for Iran Change.

Stevenson, a former Member of the European Parliament, explained that “coronavirus is not the only airborne problem troubling governments in the Middle East right now” because “revolution is in the air”.

He noted that in Iran, where 43,600 people have now died from coronavirus and the economy is in tatters because of the regime’s dire response, the poor have been sent back to work; a disastrous decision that spiked a second wave of the virus.

President Hassan Rouhani, scared of an uprising as people couldn’t afford to feed themselves, re-started the economy in April after a short and lax lockdown, imposed far too late. Now people have to choose between possibly starving to death or dying from the virus.

Recent developments in #Iraq have raised eyebrows among senior Iranian regime officials in Tehran and many are publicly voicing their concerns.#Iranhttps://t.co/dUoB9rIq7q

Rather than meet the concerns of the people, Iran increased its crackdowns on the people, especially those who tell the truth about the coronavirus, giving out prison sentences for reporting accurate death tolls.

Because the regime hasn’t been able to cover up the true impact of Covid-19 it has turned to silence those who are speaking the truth. Hossein Ashtari, the regime’s chief of police, stated publicly that no less than 320 individuals were about to be prosecuted for ‘’ disrupting public opinion” with the pandemic. At the same time, it was mentioned that the Cyber Police had allegedly sought out 1,300 websites that had been misinforming their readers about Covid-19. Ashtari wasn’t specific about what methods they intended to use to penalize the website owners.

The NCRI and the People’s Mojahedin Organization of Iran (PMOI /MEK Iran) have kept Iranians informed about the severity of Covid-19 ever since the outbreak began to become a health concern earlier in the year.

As an extra method of repression, the regime ramped up its executions of prisoners, killing at least 32 in April, including political prisoners and juvenile offenders. All the executed prisoners were a warning by the regime against stepping out of line.

Some of those had taken part in prison riots because of the overcrowded and unhygienic conditions that will make it easier for the virus to spread in prisons; giving all prisoners a possible death sentence. In Evin Prison alone, hundreds of prisoners are exhibiting dry coughs, fevers, shivering, and diarrhea, but they have been denied medical care or even quarantined away from those without symptoms.

Stevenson wrote: “The regime is terrified of another revolution that will sweep them from power, so they have resorted to daily hangings during the holy month of Ramadan… All of the signs now point to a new uprising. The Iranian people know that only regime change will free them from repression, starvation, and tyranny… A new and massive uprising is being prepared. The Iranian people have lost their fear.”

Many university graduates in #Iran who haven’t wanted to wait too long for jobs that match their qualifications have now joined the ranks of the workers.https://t.co/PQN0RUpzDZ#MEK #COVIDー19 @USAdarFarsi pic.twitter.com/fV4EZZ15Td

He explained that something similar is happening in Iraq, with hundreds of thousands of protesters prepared to remove Mostafa al-Kadhimi, an Iranian regime puppet, from power.

Stevenson wrote: “The situation in Iran and Iraq is explosive. The slightest spark will ignite the twin rebellions… Iran’s medieval mullahs and their policy of aggressive military expansionism across the Middle East and the subjugation of dissent at home and abroad, have made peaceful revolution impossible. They are about to reap the whirlwind.”