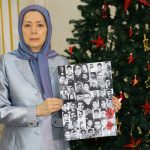 Written by Mohsen Aboutalebi on December 24, 2019. Posted in NEWS 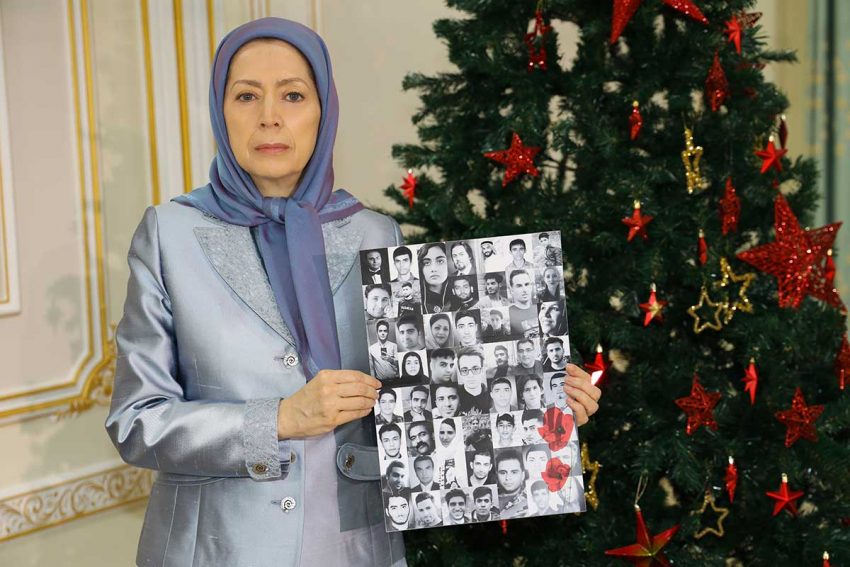 The president-elect, Maryam Rajavi, holding the photos of some of the martyrs of the November Iran Protests, urging the international community not to remain silent about the ongoing crime against humanity, on the detained protesters. December 23, 2019

The President-elect of the Iranian opposition, Mrs. Maryam Rajavi, sent a video message to fellow Christian compatriots, on the occasion of the birth of Christ, expressing her best wishes for an end to the current repressive regime in Iran, which will bring peace and security to the region. She emphasized:” Only the end of this regime will bring peace and security to the Middle East and peaceful coexistence among all nations.“

Maryam Rajavi stressed on the key message of the birth of Jesus Christ and said: “The birthday of the Prophet of peace and freedom is an occasion for the world to celebrate human values such as brotherhood and generosity.”

In her message, that was originally published on the President-elect’s official website, Rajavi also mentioned the recent Iran Protests and the clampdown by the Iranian regime’s security and IRGC forces on the defenseless protesters:

“In the final months of 2019, the people of Iran took to the streets in their greatest uprising against the mullahs’ religious dictatorship. The regime responded by killing 1,500 people, wounding 4,000, and arresting another 12,000. However, guided by the leading organization and its resistance units, the people’s Mojahedin Organization of Iran (PMOI)-[also known as Mujahedin-e Khalq or MEK], the people of Iran are determined to overthrow this regime and establish freedom and democracy in Iran.”

The November Iran Protests started with protests in objection to a sudden rise in fuel prices on November 15, 2019, but very rapidly turned into a huge and vast uprising in at least 191 cities across Iran, calling on regime change and demanding the entire ruling dictatorship to go away. The MEK resistance units had a major role in organizing and mobilizing the protests in various cities. MEK resistance units’ activities have expanded throughout Iran, despite the heavy crackdown and imposing repressive measures by the regime’s security forces.

In her Christmas message, President-elect Maryam Rajavi called on the world community to stand by the Iranian people in their cry for freedom. She urged the international community to take action and emphasized that they “must take urgent action to stop the killings and ensure the release of those arrested. The UN Security Council must hold the regime’s leaders accountable for committing crimes against humanity.”

My best wishes for a happy New Year filled with blessings, good health and prosperity- Message on the occasion of #Christmas and the advent of the New Year #Iranhttps://t.co/AMqrdsV5ne pic.twitter.com/eh4pIJUkKT

Rajavi ended her message by expressing her gratitude to all the advocates of freedom around the world who have supported the Iranian people’s struggle for freedom and democracy.” My best wishes for a happy New Year filled with blessings, good health, and prosperity.” She added.