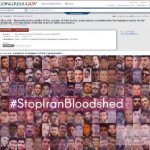 Written by Mohsen Aboutalebi on December 12, 2019. Posted in NEWS 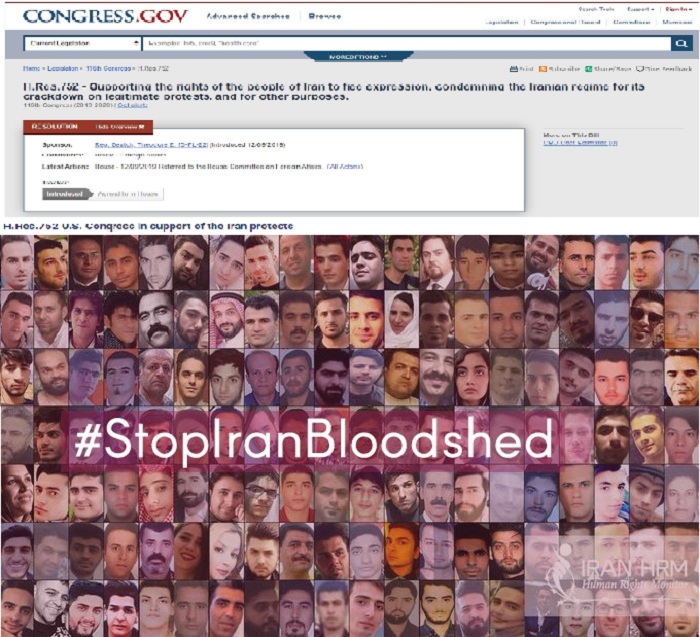 On Tuesday, a bipartisan group of congressmen in the U.S. House of Representatives introduced a resolution in support of the nationwide uprising in Iran. House Resolution 752 also called on the White House to request that the U.N. Security Council and Human Rights Council call an emergency session to condemn the Iranian regime’s brutal crackdown on protesters.

H.R. 752, “Supporting the rights of the people of Iran to free expression, condemning the Iranian regime for its crackdown on legitimate protests, and for other purposes,” was introduced by Rep. Theodore E. Deutch (D-FL) and Rep. Joe Wilson (R-SC).

The resolution summarizes the atrocities committed by the Iranian regime during the November Uprising, which began on November 15th after the regime announced a massive price hike on gasoline and quickly spread to 190 cities around the country.

The resolution stated that security forces killed hundreds of protesters and arrested thousands and noted that the Iranian government has, “in many instances, refused to return victims’ bodies to their families and that security forces have removed bodies from morgues and transferred them to unknown locations.”

The resolution discussed the Internet blackout imposed by the regime during the height of the uprising, and it described the massacre in Mahshahr in which 100 people were killed by Revolutionary Guards (IRGC) troops.

The resolution detailed the Iranian regime’s past acts of suppression and human rights violations as well, citing the June 2018 terrorist plot against MEK supporters at the Free Iran gathering outside of Paris.

The resolution also cited the 1988 Massacre of 30,000 political prisoners, most of whom were MEK members, “for refusing to renounce their political affiliations and in some cases for possessing political reading material, including prisoners of conscience, teenagers, and pregnant women.”

Iran’s 1988 massacre of 30,000 political prisoners is an “ongoing crime against humanity”. 31 years on, the perpetrators are in government & families of victims continue to be tormented. It’s high time for @UNHumanRights to investigate the #1988Massacre.https://t.co/kewzyevVYM pic.twitter.com/wrlDs8gOZM

Finally, the resolution cited the 2017/2018 Uprisings that led to thousands of arrests and at least 25 deaths, though the actual number is much higher.

The text resolves that the House of Representatives: 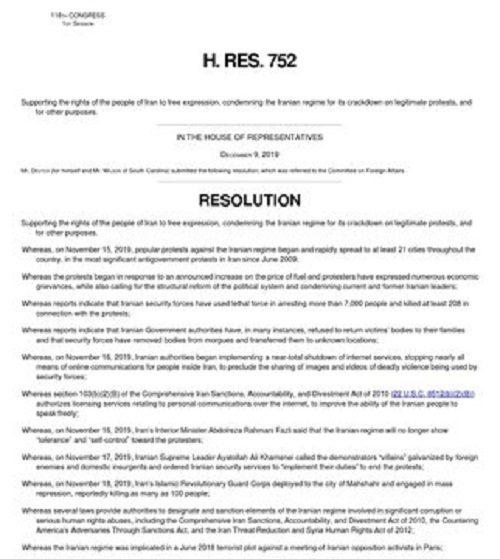