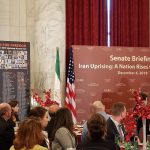 Written by Amineh Qaraee on December 5, 2019. Posted in NEWS

Wednesday, December 4th marked the 20th consecutive day of protests since the Iranian regime announced a massive price increase on gasoline, triggering a nationwide anti-regime uprising. Protesters in 189 cities have called for the overthrow of the clerical regime, citing its corruption and repression of the Iranian people.

The MEK network inside Iran reports that more than 1,000 people have been killed by the regime’s security forces since the beginning of the uprising, 4,000 more have been wounded, and over 12,000 have been arrested.

The Iranian diaspora, lawmakers around the world, and numerous human rights organizations have strongly condemned the Iranian regime’s violent suppression of its people and called for an end to the crackdown on protesters.

On Wednesday, the U.S. Senate was briefed on the situation in Iran. General James Jones told the lawmakers, “For the first time, we have hope that Iran will see a brighter day and that this regime will fall.”

Mrs. Maryam Rajavi, President-elect of the National Council of Resistance of Iran (NCRI), sent a message to the Senate briefing urging the United States to take action in support of the Iranian protesters’ struggle for freedom. She thanked those who have expressed their support of the protests and emphasized the gravity of the situation currently unfolding in Iran.

“The mullahs’ reaction has been ruthless,” she said. “They have murdered in cold blood more than 1,000 protesters in the streets. There are shocking video clips showing revolutionary guards directly shooting at young people.”

Mrs. Rajavi stressed that the Iranian people have not backed down in the face of the mullahs’ suppression. “Vast regions of the city of Shiraz in southern Iran, with 2 million residents were in the hands of people for two days,” she said.

“In some other cities, people took over the control of many districts from the IRGC. The people of Iran showed that they will not be satisfied with anything less than the regime’s overthrow,” she added.

Mrs. Rajavi stated that the uprising revealed four basic facts about the regime:

Mrs. Rajavi emphasized that the uprising would continue until a free and democratic Iran is established.

Mrs. Rajavi asked the U.N. Security Council to hold regime leaders and those in charge of suppressing the uprising responsible for crimes against humanity and ensure that they face justice for their actions.

The people of #Iran expect the U.S. Congress, the United States, the European Union and all governments to recognize the struggle and the resistance of the Iranian people to overthrow the clerical regime #IranProtests pic.twitter.com/xu40Yw6nkn

She said that the international community “must strongly condemn the regime’s Internet terrorism and assist the Iranian people to break this inhuman blockade.”

Mrs. Rajavi stressed that the U.N. “must urgently dispatch fact-finding missions to Iran to ascertain the extent of the number of martyrs, the wounded and the prisoners.”

Finally, she asked the international community, particularly the E.U. and U.S., to recognize the right of the Iranian people to overthrow the clerical regime and support their efforts to resist the mullahs’ suppression.