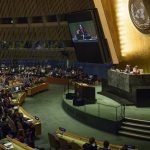 Normally, the UN General Assembly’s annual session is made a mockery of by the Iranian Regime’s mere presence, with President Hassan Rouhani spreading lies about what is happening. However, this year, the Regime was isolated and no one listened to them.

Along with the #UN General Assembly in #NewYork, thousands of #Iranians staged a demonstration across the street from the UN headquarters to protest the presence of Hassan #Ruhani, the president of the mullahs’ regime.#MEK #WeSupportMEK @USAdarFarsi https://t.co/mYNRWiwrNg pic.twitter.com/zqJFHOrWQQ

In fact, the theocratic regime faced an unprecedented reaction from the international community for its hostile and belligerent behavior; something that hasn’t happened since the Iran-Iraq war.

This is the direct result of the Regime announcing that it would stop complying with the 2015 Joint Comprehensive Plan of Action (JCPOA), which is the international nuclear deal that gives Iran sanctions relief in exchange for stopping work on its nuclear program. So far, the regime has already completed three steps that violate the deal and plan to complete a fourth.

There is now an international consensus against the regime in the UN General Assembly, which meant that Rouhani’s hypocritical plan for a “world devoid of violence” was not recognized in the General Assembly. Indeed,  the regime’s UN trip was such a failure that even state-run media outlets couldn’t find any praise.

The Third Committee has condemned the mullahs’ regime’s human rights violations over the past 38 years and this year was even worse for the mullahs, with representatives from different countries speaking up about the gross violations, including Dr. Javaid Rehman, the UN Special Rapporteur on the situation of human rights in Iran.

In his report, Rehman said: “In 2018, there were seven reported cases of executions of child offenders. There are currently an estimated 90 individuals on death row who were all under the age of 18 at the time of their alleged offenses. Among the most recent cases, on 25 April 2019, two 17-year-old children, Mehdi Sohrabifar and Amin Sedaghat, were executed.”

Mr. Rehman told the #HumanRights Committee of the UN General Assembly that he has reliable sources indicating ninety juvenile offenders are on the death row in #Iran https://t.co/ETkQEwZAS5#MEK #FreeIran @USAdarFarsi pic.twitter.com/6eNL4pqBqC

The UN has condemned the Iranian regime for human rights abuses at least 65 times over the past four decades; a constant reminder that the regime lacks credibility domestically and abroad.

The Iranian Resistance has consistently exposed the mullahs’ human rights violations for 40 years, but it has cost them greatly. The People’s Mujahedin-e Khalq (PMOI/MEK) has lost 120,000 MEK members and supporters to the executioners in Iran, merely for defending human rights and freedoms.