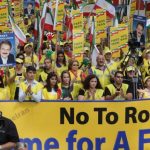 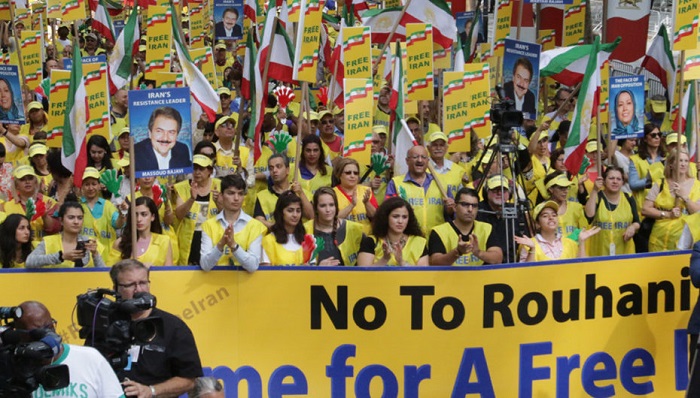 Iran-American protesters, supporters of the MEK, Rally in New York, upon Hassan Rouhani’s visit to the United Nations. The sign reads “Yes to Change in Iran, No to Rouhani”- September 2017

MEK supporters are holding a demonstration in protest of Iranian regime President Hassan Rouhani in New York next Tuesday, September 24th. The “No to Rouhani” demonstration will call attention to Rouhani’s leadership role in a regime that is the number one state sponsor of terrorism and holds the record for the highest number of executions per capita.

The United Nations General Assembly is meeting in New York from September 17-September 30. The organizers of the “No to Rouhani” protest argue that the leader of the oppressive Iranian regime has no place at the U.N. during this year’s General Assembly.

An Aggressive and Brutal Regime

The Iranian regime has escalated its crackdown on all forms of dissent in the wake of growing social unrest across the country. Its notoriously brutal and inhumane prisons are overcrowded, and the number of executions has increased. Public executions and executions of juvenile offenders are common. Political prisoners and detainees are subject to torture, sometimes to the point of death. Lifesaving medical treatment is routinely denied to prisoners, particularly political prisoners.

Meanwhile, the regime has responded to sanctions with increasing aggression, further isolating itself from the international community. It continues to support terrorist proxy groups and fund regional wars that destabilize the region, and it has launched a series of attacks on vessels in the Strait of Hormuz. The Iranian regime has also reneged on its commitments under the 2015 Iran nuclear deal and redoubled its efforts to create nuclear weapons.

The MEK supporters organizing the “No to Rouhani” demonstration believe that Rouhani, Supreme Leader Ali Khamenei, and regime Foreign Minister Mohammad Javad Zarif should be sanctioned for these crimes. They also believe that Rouhani should face an international tribunal for his role in crimes committed by the religious fascism ruling Iran.

in a WEEK JOIN us to call for a #FreeIran. Iranian-Americans gather from 40 states in #NYC (across UN) to rally against the criminal regime of the Mullas. #No2Rouhani #BlacklistRouhani @euronews_pe
@dw_persian
@RadioFarda_
@VOAIran
@BBCWorld
@AlArabiya_Fa pic.twitter.com/sRJS528tGq

The “No to Rouhani” demonstration is an extension of the anti-regime protests taking place across Iran on a daily basis. The Iranian people are crying out for freedom from the mullahs’ tyrannical rule, and they are ready to launch a new uprising with the leadership of the MEK Resistance Units. The goal of the uprising will be to overthrow the mullahs’ regime and replace it with a secular democracy in Iran.

National Council of Resistance of Iran (NCRI) President-elect Mrs. Maryam Rajavi discussed the mission of the MEK and the Iranian Resistance in a speech at the Washington, D.C. Free Iran Rally on June 21, 2019:

“… above and beyond anything else, the mullahs are most fearful of change at the hands of the Iranian people, the Iranian Resistance and the People’s Mojahedin Organization of Iran (MEK).

“It is right at this point that it becomes clear that the religious dictatorship is a paper tiger when it comes to facing off with the Iranian Resistance. And its fate is no different from the fate of the Shah’s dictatorship. This is the verdict of history and the yearning of the people of Iran. Yes, freedom will prevail over the Shah and the Sheikh (mullahs),” she said.

“The regime is getting weaker by the day, and with every passing day, it gets a step closer to its downfall. Consequently, all of us bear heavier responsibilities. This is the time for us to be on alert.

“Without a doubt, the faltering mullahs’ dictatorship cannot withstand our nation’s resistance, uprisings, and the great Army of Freedom,” she stressed.

“The time has come to rise. In such circumstances, our country Iran needs us to rise to our national duty more than ever before in order to rid our homeland of the hideous mullahs’ regime,” Mrs. Rajavi emphasized.

The greatest mission of the PMOI/MEK was to stand up to Khomeini, who for the first time in Iran’s history, enjoyed religious authority, political power &legitimacy emanating from a popular revolution, all together, turning into the most hideous force in the history of #Iran.

No to Rouhani, No to the representative of the religious fascism