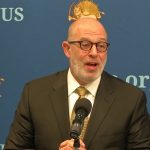 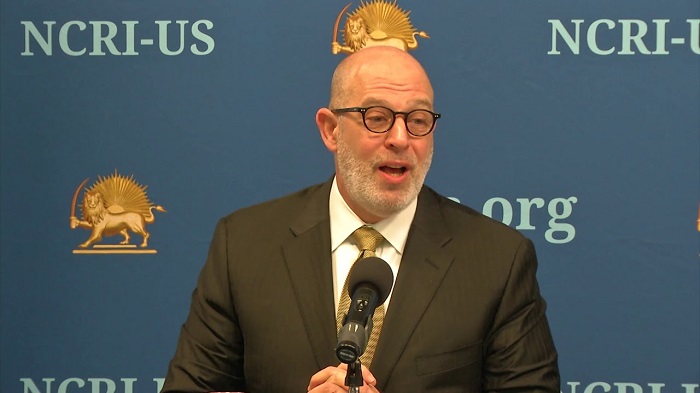 Ambassador Adam Ereli delivers a speech on the anniversary of the Iranian Revolution, Washington, DC—February 11, 2019

“The Iranian regime was a major topic of discussion during the G-7 Summit in Biarritz last month. But neither France nor any other European country should be helping the murderous regime to acquire a larger presence on the international stage. Tehran’s support for terrorism goes beyond the Middle East and threatens both Europe and the U.S.,” wrote Amb. Ereli.

Referring to the recent terrorist activities of the Iranian regime, particularly, the bombing plot against the great gathering of the Iranian opposition (NCRI) in Paris last year, Amb. Ereli added,

“In the summer of 2018, two Iranian operatives were stopped in Belgium, as they attempted to carry high-explosives to a rally that had been organized outside Paris. Tens of thousands of Iranian expatriates from throughout the world had gathered there for a conference. Many of the hundreds of international dignitaries were prominent figures in politics, security, and academia from France, the US, and dozens of other countries.”

“The plot was neutralized, as were at least five other incidents stretching from Albania to America. The Paris bomb plot led immediately to the arrest of an Iranian diplomat, Assadollah Assadi, who was found to be the mastermind. A French intelligence investigation determined that he had been acting on explicit orders directly from the highest levels of the regime. Moreover, he was using the cover provided by his diplomatic status and Iran’s embassies abroad to disguise the regime’s terrorism.  Germany extradited Assadi to Belgium, where he and three of his agents are now awaiting trial.” Mr. Ereli added

Amb. Ereli argues that Zarif’s invitation to G7 demonstrated the international community’s indifference toward Iranian regime’s terrorism and gave the regime’s globetrotting propagandist an opportunity to put a smiling face on intolerable actions and to whitewash a 40-year history of terrorist financing and human rights violations.

“The French attitude could be an undermining the US imposed sanctions on Zarif and the Supreme Leader, Ali Khamenei and Islamic Revolutionary Guard Corps (IRGC)”, he noted.

The former State Department Spokesperson also highlighted the role of Mujahedin-e Khalq (MEK) in exposing the Iranian regime’s terrorism, which, in his words, explains the hostility of Iranian regime towards the People’s Mojahedin Organization of Iran (PMOI/MEK)

“This has always been the position of the National Council of Resistance of Iran (NCRI) and its main constituent group, the People’s Mojahedin Organization of Iran (MEK), which explains why the Iranian regime is determined to eliminate this group and its members.  In addition to the attempt to blow up the NCRI’s rally outside Paris and attacks against the MEK’s headquarters in Albania last year, the government of Iran executed an estimated 30,000 MEK political prisoners in the summer of 1988. The fact that Iran’s Supreme Leader Ali Khamenei publicly acknowledged the role of the MEK in organizing the anti-regime protests that rocked all parts of Iran in 2018 is a telling admission of the group’s ability to rattle the regime.”

The solution lies in the hands of the Iranian people and Resistance who seek the overthrow of this dictatorship. #FreeIran #Iran pic.twitter.com/ua278poBSO

Instead of embracing Zarif, the mouthpiece of the terrorist regime of Iran, the international community must hold him and other terrorist officials of mullahs accountable for their crimes and as Mr. Ereli noted

“If Mr. Zarif must appear at international gatherings, he should be challenged aggressively over his government’s ongoing record of criminal activity. Anything less will encourage Iran to act with increasing impunity, with devastating consequences.”