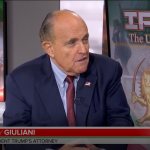 Mayor Giuliani: “MEK Iran is a vehicle for democracy in Iran and should have the support of our government” 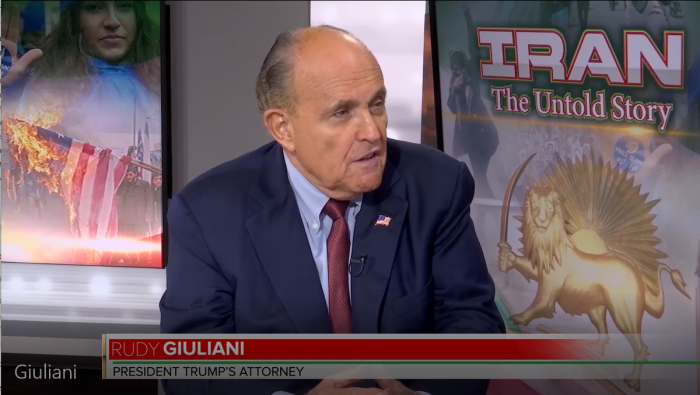 Mayor Rudy Giuliani, during an interview with the Hill TV, discussing MEK and the Iranian opposition leader, President-elect Maryam Rajavi.

Mayor Rudy Giuliani in an interview with the Hill TV described the Mujahedin-e Khalq (PMOI / MEK Iran) and the National Council of Resistance of Iran (NCRI) as a vehicle for democracy in Iran that has proved capable of a functioning government-in-exile.

Rudy Giuliani who recently attended a 5-day conference in Ashraf 3, the main residence of the MEK in Tirana, was asked a question in the interview. If the Iranian regime were to fall and Mrs. Maryam Rajavi, the leader of the Iranian opposition, was to govern, would she be able to govern during a transition period and prevent chaos? He replied:

“Well, what they do, what they—these are the questions, of course, we ask them all the time, and I’ve seen evidence that they have a functioning government-in-exile. They evaluate the problems in Iran every day. They are enormously active in communicating within Iran. They remind me of the Voice of America in one aspect during the Cold War, which used to broadcast into the Soviet-dominated countries every single day. They broadcast; they try to 24 hours a day. And they have ministers, shadow ministers for each one of the agencies of the government. And they have a plan for transition. And the plan for transition would say they’d put up an interim government immediately and they would attempt to get to a full election within six months so that there’s—so it isn’t an imposed government, it’s a democracy. And her proposition is that she doesn’t want to dominate, she wants to be elected or not elected, or elected to something and they would share leadership with maybe 10, 12 other groups.” 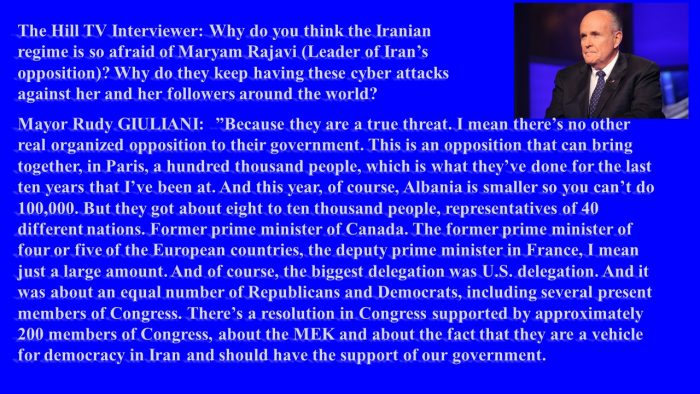 Mayor Rudy Giuliani in an interview with the Hill TV described the People’s Mojahedin Organization of Iran (PMOI / MEK) and the National Council of Resistance of Iran (NCRI) as a vehicle for democracy in Iran that has proved capable of a functioning government-in-exile.

Addressing the American public, Mayor Giuliani describes President-elect Maryam Rajavi as a “true disciple of peace and democracy” and said:

“What they should know is that this is a true disciple of peace, democracy. Her whole life has been spent trying to obtain democracy for her country, first against the Shah who killed I think her sister. And then against the Ayatollah who killed another relative. I think another sister. Her family has been the victim of both the Shah’s oppression and murder and been the victim of the even more increased murder under the Ayatollah. And people should know that this is a regime that has more blood on its hands than any regime in the world, and that it is the biggest supporter of terrorism in the world.”

Mayor Giuliani called on European governments to stop the policy of appeasement and reiterated what he also mentioned during his speech at this year’s Free Iran gathering in Ashraf 3:

“Why do we want to negotiate or trust a regime that’s the biggest supporter of terrorism in the world? And I made that challenge to the European governments. Hasn’t Iran proven to us that they are too irresponsible, that they are too murderous to have nuclear weapons in their hands? It would be too dangerous for the world. And I think the European governments have to develop the kind of courage that President Trump has.”

Outlining his view of this year’s gathering, he added:

“So the conference was about basically how can we replace the regime of Iran with a democratic government, which the MEK has been attempting to do for 20 years. I have about 11 years of involvement with them. But they have a tremendous amount of support in the United States, bipartisan, about 200 members of Congress, an equal number of Republicans and Democrats. I was there with former Senator Lieberman, Democrat, former Senator Torricelli, who’s actually one of their principal people. He’s been involved with them longer than I have. And what they are is basically the National Council of Resistance in Iran is headed by Madame Rajavi. She’s the president-elect. And it’s made up of a group of organizations including the MEK that are resistance groups, like the French Resistance, against the Ayatollah. They’ve been active since the revolution. A hundred and twenty thousand of their people have been killed but they still are going strong.”

Rejecting speculations about the MEK’s popularity in Iran and the disinformation Iranian regime lobbyists try to spread in this regard, he vowed:

“Both the ayatollah and Rouhani have announced within the last year that they are the biggest threat to the regime. In the years past, it was always doubted that was created about how strong are they in Iran? How much support do they have? I think that all has been put to rest now with basically Rouhani’s statement and the Ayatollah[Khamenei]’s saying that the MEK, and sometimes they’ll call PMOI, is our most dangerous threat, the only one capable of putting a government together, and therefore we’ve got to wipe them out, which is what they do.”

“If they find that you’re a member of this organization, or suspect that you’re a member of this organization, by and large, you don’t get a trial. You’re either imprisoned or you’re shot depending on the circumstances. And so 120,000 since the beginning of the revolution. Probably another thousand in the last couple of years. And they have a government-in-exile. They have tremendous support. They have tremendous support in what’s called the Iranian diaspora. And they have a charter, 10 points, which largely looks like our Bill of Rights. Significant thing is, they’re headed by a woman. This is, this is the Middle East. This is right next to the Arab world. Not only are they headed by a woman, but roughly half their leadership are also women”, Mr. Giuliani added.

.@RudyGiuliani: Iran's democratic opposition the MEK has grown & grown. I feel an optimism in this room that I haven’t felt in previous meetings. If you wanted to build this city in NYC it would take 15 yrs. You've done it in a year#IStandWithMaryamRajavi #FreeIran #WeSupportMEK pic.twitter.com/aAZe5kMJcP

Regarding the prospect of regime change in Iran and the role of the Iranian opposition, Mayor Giuliani relied on his insight into the matter and reply to the question, “does she [Maryam Rajavi] have a chance to lead Iran into a democratic state?” said:

“She does. I mean, she does have a chance. I mean, I don’t think people realize how much turmoil there is inside of Iran. Since January of 2018, I think I have my facts correct here, there have been over 250 major protests all throughout the country, not just in Tehran. And now they have spread into the economic sectors. So there have been taxi drivers that have gone out on strike and protest. There are teachers, all the teachers of the country went on strike. There are farmers, professors have joined the political activists. And you can see it. Videos that I saw when I was in Albania because they have probably the MEK people, the PMOI [MEK] people have the best window into Iran”.

As a respected lawyer and an expert in the field, Mr. Giuliani also addressed the 1988 massacre of MEK political prisoners in Iran and said, “Back in 1988, within a two-month period, the regime killed 30,000 members of MEK. Thirty-thousand people! We are talking about a crime against humanity. Crimes for which they should be prosecuted in the World Court.”