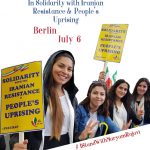 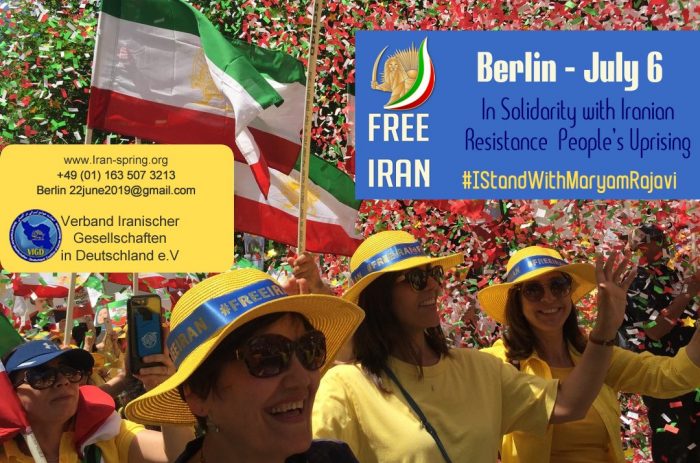 Iranians, supporters of MEK will rally in Berlin for a free Iran and in solidarity with the people’s uprisings -July 2019

Thousands of MEK supporters will gather in Berlin this weekend for the next Free Iran rally. The National Council is Resistance of Iran (NCRI) announced the event earlier this year, and the rally has received attention from media outlets.

The Kuwaiti daily al-Siyassah mentioned the previous Free Iran rallies before writing about the upcoming Berlin event: “Following a June 15 rally in Brussels and a massive June 21 demonstration in Washington, supporters of the Iranian opposition group People’s Mojahedin Organization of Iran (PMOI/MEK) will hold a large gathering in Berlin on July 6.” the article said.

#FreeIran rally in support of freedom and democracy in #Iran

The article went on to explain the goal of the Berlin rally. “More than 12,000 members of the Iranian community in Germany are predicted to be taking part in this demonstration. The participants will be voicing their support for the Iranian people’s widespread movement that is calling for an end to the ruling dictatorship and the overthrow of the mullahs’ regime. They are seeking to establish democracy, human rights, ending executions and the regime’s warmongering. Iranian communities in Germany will be calling on the international community to take action to stop the mullahs’ regime from obtaining nuclear weapons, Tehran’s terrorism drive and sectarian wars in Middle East countries. The participating Iranians in the Berlin rally will call on the European Union to bring an end to their appeasement policy and take a firm position against the mullahs’ regime.”

In an April 8th message, NCRI founder Massoud Rajavi called on supporters of the MEK and the Iranian Resistance around the world to demonstrate for freedom at this year’s annual Free Iran rallies. He wrote: “I am calling on our compatriots, those yearning for freedom in Iran, the supporters of Ashraf in various countries across the globe: If you agree, I am asking you to turn this year’s annual rally into demonstrations in the streets of cities wherever possible. This will be parallel to our people’s protests inside Iran.”

”The 1980 article by ⁦@lemondefr⁩ which said if #Massoud_Rajavi’s candidacy had not been stopped (by Khomeini’s fatwa), he would have won millions of votes & Iran would have seen a different destiny.” #FreeIran #PolandSummit ⁦@StateDept⁩ ⁦ https://t.co/D5daZd4l6B

The Free Iran rally in Berlin is part of a series of events being held this summer by the MEK and the National Council of Resistance of Iran (NCRI) in world capitals in the United States and Europe. Rallies have already taken place in Brussels and Washington, D.C., and upcoming events are scheduled in Berlin, Stockholm, and London. An international conference took place at the MEK headquarters in Albania last weekend. Each rally has been attended by thousands of members of the Iranian Resistance and the MEK and has featured speeches by prominent politicians, dignitaries, and human rights activists from around the world.

Therefore, to those who want to give the mullahs more chances, we say:#FreeIran #Iran pic.twitter.com/3kKQMfKzAP

The participants at the Berlin Free Iran rally hope to build on the success of the earlier events and to echo the calls for a free and democratic Iran. The Iranian Resistance is asking the international community to recognize the right of the Iranian people to rise up against their oppressors and to specifically recognize the NCRI as the democratic alternative to the theocratic regime in Iran.