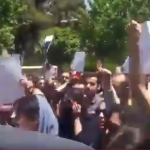 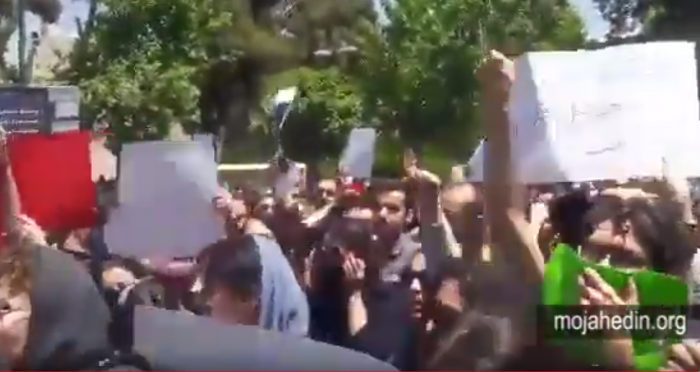 On Monday, April 13, students at Tehran university held a rally in opposition at the Iranian regime over the repressive restrictions in place on female students’ clothing on campus. A video clip of the students’ rally was shared across social media by the People’s Mujahedin Organisation of Iran (MEK).

The University of Tehran enforces new restrictive forced hijab regulations. Female students have to wear the hijab and cannot make their own decisions regarding freedom of clothing. They chanted, “college students would rather die than live in shame,” and held signs reading: ““Freedom of choice is our right.”

May 13, Tehran #Iran
The action of the university which is a sheer violation of privacy of students and directly violates their human rights and is a clear tyranny against female students, has been received with much protests in the student communities.#IranProtest @USAdarFarsi pic.twitter.com/swycfoGSwl

The student protests come just days after the regime announced that it would launch a new police force to tackle political dissent and expression.

Last Wednesday, the regime’s chief of police, Hossein Ashtari, announced the assembly of the Razavion Patrol. The patrol is an extension of the Basij patrols that have taken place since the nationwide uprising in early 2018. The Basij forces regularly set up checkpoints in areas where there are more protests and harass suspected dissidents (i.e. supporters of the MEK).

The Razavion Patrol will undertake similar activities but are expected to have more funds and resources than their Basij counterparts.

Gholam-Hossein Gheibparvar, a commander in the Basij forces had alluded to the crackdown last September. He revealed, “we have begun a series of plans to upgrade the IRGC Basij… we believe our patrols are more effective than checkpoints. More recently, these Basij patrols have been dubbed as the Razavion network.”

The network was partially rolled out in November, with patrols beginning in Bukan and Yazd, as well as in Alborz Province. However, it wasn’t a nationwide scheme until now.

The Iranian regime is increasing pressure on protestors. The most recent student protest will have only increased regime fears that the political opposition is drawing increased support from the Iranian population.

2019 has seen regime officials become increasingly worried about the rising popularity of the MEK, the largest and most organized opposition group. Javad Javeed-Nia, the regime’s Deputy Prosecutor General in Cyberspace Affairs, said : “Considering the fact that our enemies [the MEK] have established cyber armies against the [mullahs’ regime], those who care about our state must launch a media campaign against the enemy, identify the enemy’s strengths and weaknesses, and place forward an adequate analysis.”

The state-run Tehran Press News Agency also expressed concerns over the MEK’s use of the instant messaging app, Telegram.

The students’ rally must be seen in the context of a regime rapidly losing its grip on power in the face of mounting political dissent. The Iranian public, like Tehran’s youth, will not stand idly by while the regime embarks on a campaign of violence and repression.

The mullahs are scared. They are right to be. The tide of change is coming.