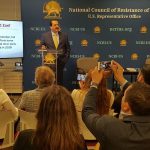 The NCRI Holds a Press Conference in Washington D.C. On the Iranian Terror Threat 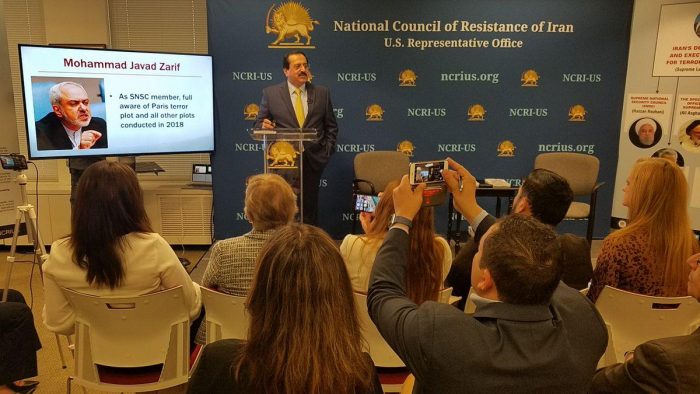 The National Council of Resistance of Iran – U.S. Representative Office (NCRI-US) holds a press briefing to release a new book, Iran’s Emissaries of Terror: How mullahs’ embassies run the network of espionage and murder.– May 1, 2019

On Wednesday, May 1, the National Council of Resistance of Iran (NCRI) held a press conference at its Washington DC bureau to introduce its new book “Iran’s Emissaries of Terror: How mullahs’ embassies run the network of espionage and murder”. The opposition group’s Deputy Director of the US operations, Alireza Jafarzadeh addressed journalists and briefed them on what the book cover, the Iranian regime terror threats in the U.S. and the EU.

In 2018 alone, the Iranian regime coordinated terror attacks or assassination attempts in France, the US, Albania, the Netherlands, and Denmark. The attacks were enough for the French and Albanian governments to expel Iranian diplomats. The US also arrested two Iranian agents accused of planning an attack against the People’s Mujahedin Organization of Iran (MEK), an opposition pro-democracy group.

Jafarzadeh went on to describe the Iranian power structure. “There are five major decision-makers in Iran, but ultimately everything boils down to the Supreme Leader, Khamenei,” he said. This includes the final say on the terror plots, the decision to send agents to abroad under the cover of journalists, and the decision to carry out assassinations against MEK members living abroad in exile.

“Embassies provide cover to the MOIS to allow them to exploit diplomatic immunity & diplomatic pouches in order to carry out terrorist attacks. When terrorists are caught, their job is to explain it away and get their terrorists back to Tehran,” Jafarzadeh explained.

Jafarzadeh explained how the Security Council in Iran, which includes the Iranian President Hassan Rouhani and the Foreign Minister Javad Zarif, is responsible for coordinating terror plots alongside the Iranian Ministry of Intelligence (MOIS).

“Zarif should have been arrested once he arrived in NYC because he has been involved in terrorist activity for years,” he said.

Previous Iranian foreign ministers have also been implicated in the state-sanctioned terror apparatus. Ali Akbar Velayati, the former foreign minister, is wanted for his involvement in coordinating terror plots in Europe and Argentina.

The implication of the senior leadership of the Iranian regime in state-sponsored terror attacks exposes the myth of the regime moderates. In the West, Hassan Rouhani and Javad Zarif have been held up as moderate elements in the regime, worthy of US and European cooperation and support.

Jafarzadeh: "Five diplomats have been implicated in terrorist attacks in Europe in the past year. Zarif should have been arrested once he arrived in NYC because he has been involved in terrorist activity for years. He is a terrorist &deserves to be arrested.”#Iran #BlackListMOIS pic.twitter.com/IOfDCJeXad

A so-called “moderate” would not sit on a Security Council whose sole purpose is to coordinate terror attacks on foreign soil. “Javad Zarif puts on a smiley face but his hands are bloody,” Jafarzadeh said at the press conference. “His job at the United Nations was to explain away the massacre of political prisoners. His job was to cover up the murders of the Iranian regime,” he added.

For Jafarzadeh and the NCRI, the next step in confronting the Iranian regime’s export of terrorism is for the United States to include the MOIS on the Foreign Terrorist Organization(FTO) list. He said this would send “a very strong message to the Iranian regime: if you sponsor terrorism, we are going to treat you like terrorists.”

Jafarzadeh concluded: “What we are calling for is closing the Iranian regime’s embassies. These diplomatic relations have allowed the regime to plot terrorist attacks and assassinations in the West.”

He added: “No country should be allowed to buy Iranian oil.” And called for the imposition of increasingly strict sanctions to deprive the regime of oil revenues to spend on its terrorist activities.

“But the real solution for the Iranian regime,” he said, “is not just sanctions. The real cure is regime change by the people of Iran.”