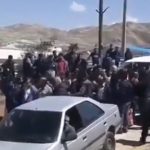 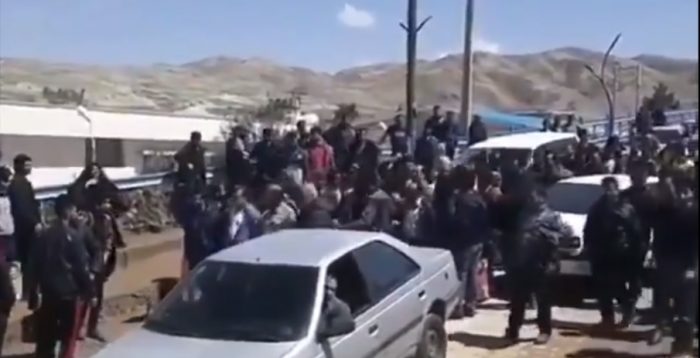 IRGC General Mohsen Rezai (former commander in chief of the IRGC,) visits the flood-stricken area in Lorestan, facing a protest by people objecting his propaganda visit that came several days after the flooding.

A number of protests have taken place across Iran after a series of major floods devastated large portions of the country. The protesters are angry about the regime’s failure to provide emergency shelter to those who lost their homes in the disaster. They are also demanding that the regime answer for its decision to release water from major dams—flooding homes, businesses, and farmlands—in order to prevent the floods from reaching its oil wells.

The Revolutionary Guard Corps, the Bassij and their wherewithal are used to suppress the flood-stricken people and provide security for the mullahs. #Iran#IranFlood

Regime officials have denied that protests are occurring, despite evidence to the contrary.

IRGC Public Relations Chief Ramezan Sharif said reports of protests were “propaganda.” But videos shared on social media tell a different story. Protests can be seen in the flood-ravaged provinces of Lorestan and Khuzestan.

In one video shared by the MEK network, an angry crowd greets former IRGC Commander-in-Chief Mohsen Rezai when he attempted to visit Lorestan Province. One man can be heard saying, “Have you come to take pictures & selfies? Why have you come? Get lost!”

Iranians are holding the regime responsible for #IranFloods devastation. pic.twitter.com/2L4MfOUNTp

“Get lost!” has been a popular slogan among residents of flood-damaged areas in response to propaganda visits from regime officials.

Another video shows protesters surrounding the vehicle of regime Army commander Ahmad Khadem Sayyid al-Shohada in Khuzestan Province. He shrugged off the protesters as “emotional” but then acknowledged that the regime is damaging farmlands by opening floodgates in dams.

Sayyid al-Shohada said, “In some areas, we need to remove barriers in order to allow flood water to run downstream although this measure may cause damages in the farmlands.”

No sign of any help or support from regime authorities.#IranFloods pic.twitter.com/mMw8DQmwDr

Although the regime initially claimed that it would pay for damages caused by the floods, the Speaker of Parliament recently admitted that there is not enough money to follow through on this promise. Victims of previous disasters pointed out that they still haven’t received compensation promised to them. Over a year after an earthquake rocked Western Iran, many residents in the area are still living in tents. Some of those tents were washed away in the recent floods.

Protests in the city of Dasht-e-Azadegan, Khuzestan Province, turned deadly when Revolutionary Guards (IRGC) forces responded to the scene. Protesters clashed with Revolutionary Guards forces, who then fired into the crowd, killing one protester, identified as Aboud Jalizi, and wounding several others.

While tens of thousands of victims of the floods wait for desperately needed relief, factions within the regime struggle to pass the blame for the inadequate response to the disaster. The IRGC has accused regime President Hassan Rouhani’s administration of failing to appropriately manage the response to the floods.

Mohammad Pakpour, commander of IRGC ground forces acknowledged D pple’s anger after he visited D flood-ravaged town of Poldokhtar in Lorestan province. While he was bombarded by D anger & complaints of D pple…https://t.co/iMZoo5tmrb#IranFlood#IranRegimeChange

In an April 3rd telephone reports to his superior officer, IRGC commander Mohammad Pakpour complained that there was “no management”  of the emergency rescue or relief response in Lorestan Province. He further said that government officials did not “dare” to visit the area because “the people are in a rebellious mood.” He reported on the condition of those who had been evacuated from the area, saying that they were “in a sorry state and conditions are bad.”

Confessions of a top commander of the Revolutionary Guard
People are very angry.
I dare not go to the flood areas#IRANFLOOD#Iran
#IRGC
#40YearsOfFailure
#IranRegimeChange pic.twitter.com/061pAIvvm6

The series of floods began on March 19th and continued into the beginning of April. At least 26 out of 31 provinces were damaged, including hundreds of towns and villages. Local reports indicate that at least 200 people died in the disaster.