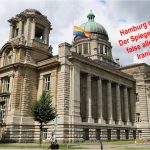 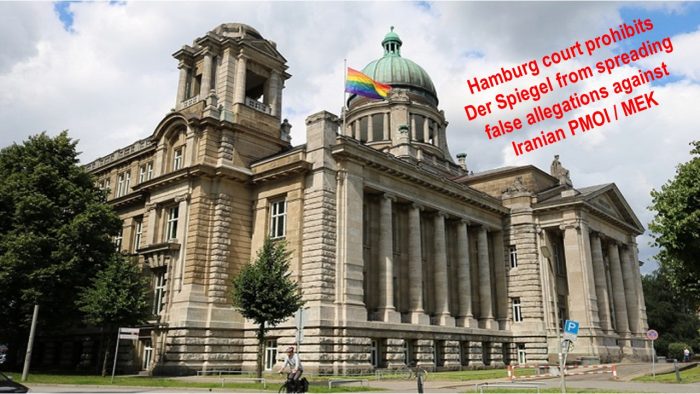 The court in Hamburg rules against the spread of false information against MEK, Iran’s main opposition.

A Hamburg court struck a blow to the Iranian regime’s misinformation and demonization campaign against the People’s Mujahedin Organisation of Iran (MEK). On Thursday, March 21, a Hamburg court ruled that German Magazine Der Spiegel acted illegally by spreading false accusations against the MEK. It determined that the magazine had failed to adhere to the basic principles of journalism and adequately fact check information it received from the clerical regime in Iran.

In an article published in the magazine on February 19, Der Spiegel printed a host of lies and falsehoods about the Iranian pro-democracy organization. In particular, it repeated regime lies that accuse the MEK of engaging in brutal violence and torture, which were proved to be incorrect, the court order says.

Congratulations to our beloved heroes at #MEK (#Iran's main opposition residing in #Ashraf3) in Albania,for the recent court order against #Spiegel_FakeNews, ordering #Spiegel to erase the unfounded allegations from @DerSpiegel& related publications.#FreeIran pic.twitter.com/09pWETwkHI

The MEK pointed out that Der Spiegel’s “journalist” who researched the piece, worked closely with the Iranian regime and Islamic Revolutionary Guards Corps (IRGC). The magazine also ignored the MEK’s requests to visit its compound in Albania, Camp Ashraf, the alleged site of torture and violence. Der Spiegel’s unwillingness to visit the MEK’s site at the invitation of the group demonstrated a lack of interest in uncovering the truth and reality of the situation in Albania. It showed the magazine preferred to spout fabrications at the behest of the Iranian regime.

Part of the article was even published before its release on a website controlled by the Iranian Ministry of Intelligence (MOIS). This illustrates the deep cooperation between Der Spiegel and the clerical regime.

Following the article’s publication, the National Council of Resistance of Iran (NCRI), the umbrella organization which includes the MEK, applied for an injunction in the Hamburg courts against the magazine.

The court ruled that Der Spiegel is now prohibited from publishing allegations of torture against the MEK at its settlement in Albania. The court decided that the NCRI had “substantiated the false nature” of the allegations. It also prevented the magazine from publishing any further allegations that accuse the group of practicing “cutting throats with knives, breaking hands, piercing eyes with fingers” and, “tearing corners of the mouth.”

The court threatened Der Spiegel with a €250,000 fine. In the event that the magazine cannot, or will not, pay the fine, the court invoked a custodial sentence of up to six months.

Der Spiegel removed the illegal statements from its article online.

The original article repeated regime mistruths and lies. It was welcomed by the regime’s state-run media. The Mehr and Fars news agencies both ran pieces echoing Der Spiegel’s claims to much fanfare and many other Iranian media outlets published translations of the article.

In a statement from the NCRI, its representative office in Germany explained the danger of allowing regime misinformation to propagate. “By spreading false information, the regime justifies its domestic massacres of the PMOI/MEK and prepares the ground for its terrorist operations on European and foreign soil,”. Referring to the reasons for a rise in the misinformation campaigns against the MEK, the statement says:

“After the safe and organized relocation of the PMOI/MEK from Iraq to abroad, and after popular uprisings in Iran in January 2018 and the end of US appeasement of this regime, the Iranian regime has resorted to intense terrorism and disinformation campaigns against the PMOI/MEK and Iranian Resistance, believing this to be a remedy to its existential crisis. By spreading false information, the regime justifies its domestic massacres of the PMOI/MEK and prepares the ground for its terrorist operations on European and foreign soil. Additionally, it messages a lie to Western circles that there is no alternative to this regime and that if it were overthrown, conditions in Iran would worsen.”

As a result, the ruling in Hamburg must be viewed as a victory. Not just for the MEK, but for truth, democracy, and stability both in Iran and in the West. The regime must not be permitted to hijack Western media outlets to advance its own objectives and undermine regional security. It is our collective responsibility to challenge regime lies, wherever they occur.