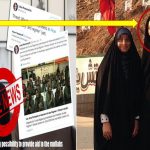 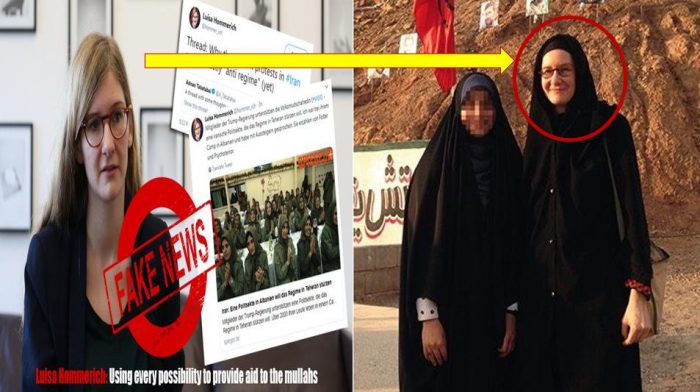 Louisa Hommerich, DerSpiegel writer who traveled to Iran and studied there for two years and earned the Iranian regime’s trust to a degree that she was given permission to participate in Basij military practices. Basij forces, part of the Iranian regime’s repressive forces, responsible for cracking down on protesters in Iran.

The German magazine Der Spiegel in an article on Feb. 16, 2019, entitled “Prisoners of the Riots”, gave a very unfair report on the People’s Mujahedin Organisation of Iran (MEK) and its new compound, Ashraf 3. The group, which is the largest and most serious opposition force to the Mullahs’ ruling regime, relocated to Albania on the site of Ashraf 3 following intense persecution and violent attacks in both Iran and Iraq.

The Der Spiegel article is based on the widely discredited and false testimony of ex-members of PMOI (MEK), who today openly serve the Ministry of Information and Security (MOIS) of the Iranian regime.

For a better understanding of the issues raised in this article, we need to have a brief look at the regime’s history and origin.

The clerical regime’s leadership from Khomeini to Khamenei had decided that the survival of their regime depended on the physical annihilation of the PMOI (MEK) members and their supporters. To make this a reality the Ministry of Intelligence and Security of the mullahs decided to create an “Anti- Hypocrisy Division”(the derogatory name used by the regime to describe its main opposition) and has steadily advanced this policy for the past 30 years inside and out of Iran.

The regime adopted a two-pronged approach to eradicating the MEK. The mullahs carried out the arrests, imprisonments, torture, and execution of MEK supporters inside Iran. Simultaneously, they embarked on an extensive propaganda campaign to demonize the group through the dissemination of fake news and false allegations abroad.

False allegations made against the MEK included tales of the imprisonment and torture of members who left the group, compulsory divorce of members and the disintegration of the family unit, restricted communication with the outside world, and the existence of a financial-political association with Saddam Hussein.

Alongside these serious and malicious accusations, the MOIS carried out assassinations of key figures in the Iranian resistance group. It killed Prof. Kazem Rajavi, Mohammad Hossein Naghdi, Zahra Rajabi. The MOIS also attempted to kidnap many other activists connected to the MEK.

Those that followed the events during the political phase (1980-1981) will remember Khomeini’s statements about the MEK. Khomeini used to say that “PMOI (MEK) members are worse than infidels,” and he even referred to MEK as the “enemies fifth column” during the destructive Iran-Iraq war.

False and negative allegations about the MEK that have been published on international media outlets like Der Spiegel, started with the inception of this regime and the roots of the allegations can be traced to the intelligence and security apparatus within the Iranian government. The MOIS uses paid agents under the guise of ex-MEK members, former political prisoners, activists, researchers, authors, and journalists to spread the falsehoods and allegations as part of a large-scale disinformation campaign.

In the Der Spiegel article, we see the same pattern of reporting visible in other regime hit pieces.

The Der Spiegel article that was scheduled to be published on November 24, 2018, was delayed, without explanation for around three months. Its final publishing date coincided with the Warsaw conference. The hit piece was likely designed to overshadow the political victory of the resistance and help the Mullahs regime in the international arena.

A Persian translation of Gholamreza Shekari’s interview (An agent of MOIS), which was included in the final Der Spiegel article, was posted on a Ministry of Intelligence website on November 24, long before the full text was published on the Der Spiegel site, indicating that there had been extensive collaboration between the MOIS and Der Speigel’s writers and “journalists”.

@hommer_ich's article was posted on the #Iran's regime MOIS website 3 months before publication in @DerSpiegel. What do you have to say about that? #Spiegel_FakeNews #FakeNews #Spiegel pic.twitter.com/R37TJMLj0C

Journalism is responsible for informing society. The facts they report help shape public opinion. Therefore, journalists have the moral obligation to work within a strict ethical framework. Journalism should question and criticize where appropriate. It should challenge inaccuracy wherever it finds it and stands committed to the pursuit of truth. Journalists have the obligation, at least in the fact-finding stage of investigations, to observe neutrality and remain objective until the facts are revealed. This is one of the main criteria of the ethics of journalism.

According to evidence and photographs available, the author of the Der Spiegel article, Ms. Louisa Homerich, studied in Iran for two years and spend a significant amount of time in the country carrying out research for the piece. It is not possible for a foreign citizen to spend so much time in Iran without the direct coordination and approval of the regime intelligence agencies. During her stay in Iran, she enjoyed the hospitality of the revolutionary guards and was allowed to accompany the Women Basseij forces on a military maneuver called “Women on Path of Light”. She last visited Iran in January 2018.

Her extended stay in Iran, including her university studies, and close ties to the political, military and security apparatus in the country have raised serious questions over her “impartiality” and the agenda behind her reporting on the Iranian opposition. 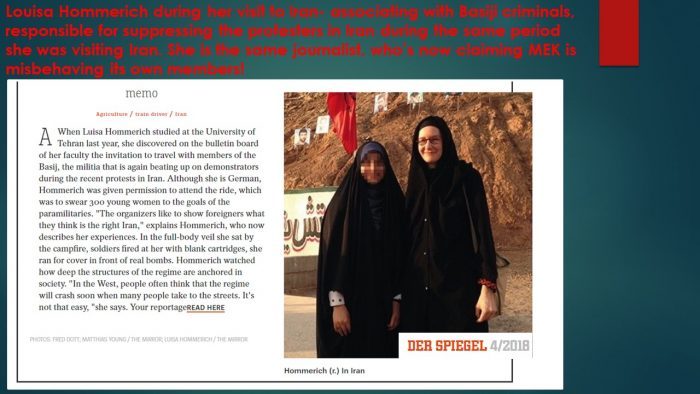 Louisa Hommerich studied in Iran and was trusted enough to be given the chance to participate in Basij (Notorious security forces responsible for repression of Iran Protesters) in their tactical maneuvers.

Upon becoming aware of the intentions Ms. Homerich and the upcoming Der Spiegel article, the National Council of Resistance of Iran, the umbrella organization of the MEK, in Germany tried to contact the magazine on several occasions to invite them to Ashraf 3 in Albania. The NCRI invited Der Spiegel to send reporters to speak to the residents in person and continue their fact-finding endeavor. However, the NCRI’s calls remained unanswered.

Instead of interviewing current members of the MEK, Der Spiegel drew conclusions based solely on the testimony of individuals who have actively sought to vilify the Iranian opposition at the behest of the mullahs for years. As expected, they cited false information and fake documents that contradict publicly available court documents. The end result is an article lacking a shred of truth or credibility.

In the article, a person named Mostafa Mohammadi is referred to as a witness. He is another known MOIS operative and regime insider. He has been claiming for years that his 39-year-old daughter, Somayeh Mohammadi, is being held captive by the MEK! Mostafa Mohammadi filed complaints in Canadian, Iraqi and Albanian courts seeking the “release” of his daughter from “the clutches of Rajavi’s cult”. All three courts ruled that the claims were baseless and rejected his complaint.

Another person referred to as a witness in this article is Gholamreza Shekari, who claims he was a member of PMOI/MEK for 27 years and was jailed and tortured by the group 24 years ago. He claims the group brainwashed him and that is why he remained with the organization after the torture took place! Mr. Shekari admits that he kept receiving monthly financial help from MEK for as long as he had not visited the regime’s embassy. The financial help was discontinued after his ties to the regime were revealed. He is now an active intelligence operative advancing the vilifying policies of the regime against the MEK. His interview with Der Spiegel appeared in several MOIS websites three months prior to Der Spiegel published its article!

Has anyone ever heard article of a major Western publication be published by secret service of a totalitarian regime beforehand? #Spiegel provided article on #Iran opposition to MOIS 3 months ago & MOIS published it, attributing #Spiegel. Hook, line, and sinker. #Spiegel_FakeNews pic.twitter.com/wDtt4ztul1

In the end, it should be noted that the author of the article “Prisoners of the Riot”, in repeating the persistent falsehoods and lies of the Mullahs regime’s security apparatus served to further the Iranian regime’s propaganda objectives. It violated the core principles of journalism and sought to demonize a pro-democracy group fighting for the fall of the tyrannical religious fascism of the mullahs.