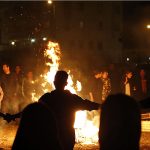 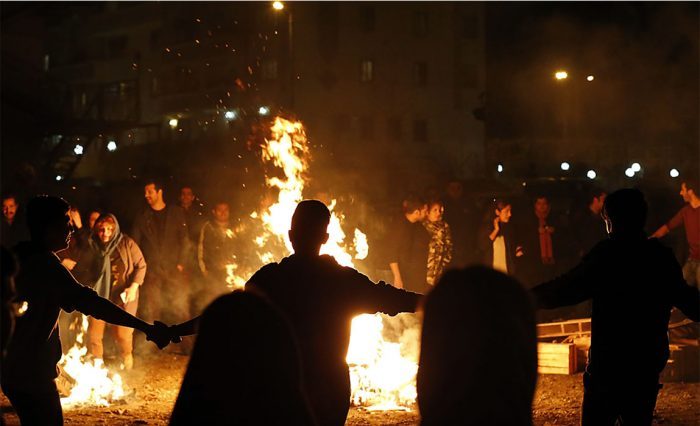 Fire Festival in Iran, turns in to a protest against the regime in entire Iran

On Tuesday, March 29th, people in cities across Iran, especially the youth, used the celebration of Chaharshanbe Suri (Fire Festival) as an opportunity to protest the mullahs’ oppressive regime. The protests took place despite the regime’s efforts to prevent celebrations of the national holiday.

Last year’s Fire Festival followed the December 2017 uprisings that spread to 142 cities in every province over a two-week period. The massive nationwide protests brought thousands of Iranians from all sectors of society into the streets to demand the overthrow of the clerical regime and sparked a protest movement that continues to this day.

Despite heavy suppression by the regime, brave people across #Iran are celebrating the ancient Festival of Fire (Chaharshanbeh Soori).

Chaharshanbe Suri came on the heels of this massive uprising, and the MEK and Iranian Resistance organized celebrations of the event in cities and towns around the country as an act of rebellion. The regime, which was already shaken to its core by the uprisings and growing Iranian Resistance, reacted to the Fire Festival celebrations with suppressive actions.

This year the regime expressed its fear of protests by stepping up its attempts to prevent celebrations of Chaharshanbe Suri. Regime Supreme Leader Ali Khamenei issued a fatwa against the Fire Festival, saying that “Chaharshanbe Suri has no religious basis and it leads to damage or corruption or propagation of false beliefs, not permitted.” Members of the regime’s judiciary warned people in several cities that “those in violation” would be dealt with severely.

Protests and Clashes with Suppressive Forces

Despite these threats, youth in a number of cities, including Tehran, Mashad, Karaj, Masjed Soleiman, Khorramabad, Semnan, Ilam, and Mahshahr protested on Tuesday, burning pictures and effigies of Khamenei and Khomeini and chanting, “Death to Khamenei, death to the principle of Velayat-e-faqih, death to the dictator, with you, Dictator, we would fight fire with fire!

In other cities, people attacked official centers with sound grenades and fireworks. In the city of

Divandareh, youth clashed with repressive forces, who fired guns into the air to disperse protesters.

In Isfahan and several other cities, security forces unsuccessfully attempted to stop people from celebrating Chaharshanbe Suri, but their attacks were not enough to stop the Fire Festival.

The clerical regime slowed the Internet in some areas and cut off access to the Internet completely in others in attempts to prevent protesters from sharing photographs and videos of the protests on social media. These efforts were not entirely successful.

Chaharshanbe Suri is an Iranian tradition that predates the Islamic regime. The Fire Festival takes place on the last Tuesday before Nowruz, the Persian New Year, and includes a number of traditions, including jumping over a bonfire. The holiday has long been a target of the mullahs’ ire because of its association with pre-Islamic tradition, but it is deeply ingrained in Iranian culture and particularly popular among the nation’s youth. Attempts to suppress public celebrations of Chaharshanbe Suri have proved to be fruitless, and over the past two years, the holiday has become a symbol of the growing Resistance Movement.

The MEK’s Social Headquarters issued a communique on March 1, 2019, inviting the youth of Iran and the Resistance Units to burn pictures and effigies of Khamenei, Khomeini, and other symbols of the regime in every street and corner during celebrations of Chaharshanbe Suri.