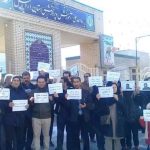 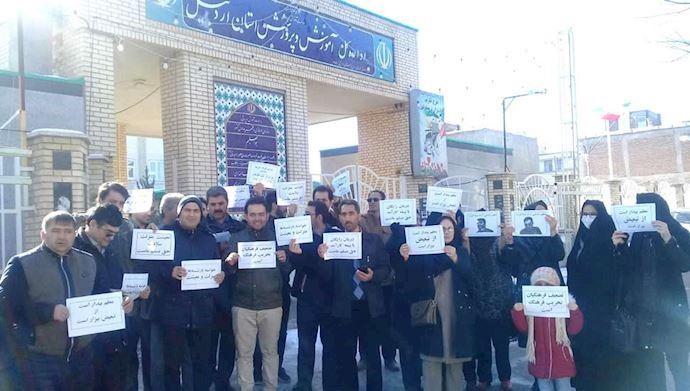 Archive photo-Demonstrations in front of the offices of the education ministry in protest to the government’s lack of response to their demands.-January 2019

Under increasing pressure at home, the Iranian regime has intensified its misinformation campaign against the People’s Mujahedin Organisation of Iran (MEK). The Iranian regime faces widespread protests each and every day. Since Sunday, there have been nine protests across the country attacking the mullahs’ mismanagement of the economy, soaring inflation, and unpaid wages.

These are the latest developments in a wave of protests that have washed across Iran over the last 14 months. What began in a nationwide uprising at the tail end of 2017, shows no sign of letting up.

An “army of hungry and unemployed” Iranians are taking to the streets and calling for regime change. Youth unemployment is above 50%, Iranian purchasing power is falling, and wages are stagnating. Iranians are struggling to put food on the table, meanwhile, the mullahs are living lavish lifestyles, funneling money to militia and terrorist groups abroad, and spending vast sums on clandestine missile programs.

Rather than look inward at its own failings, the clerical regime has looked outwards and responded to the intensifying protest movement by cracking down on political opponents. As sanctions start to bite, targeting the regime’s oil revenue and crippling its finances, the regime has intensified its attacks on the MEK, the largest and most organized pro-democracy group who has played a crucial role in mobilizing the population.

The regime has deployed a misinformation campaign targeting the opposition group. Last year, Twitter removed 770 regime-affiliated accounts that the mullahs were using to spread disinformation about the MEK. A separate investigation from Reuters found that the Iranian regime used more than 70 websites to spread anti-MEK propaganda across the world, many of which are still in operation today.

The mullahs’ latest attacks have come through Western media outlets. Its most recent hit piece against the MEK has published in German magazine Der Spiegel. As with previous hit pieces, including one published last year in the UK’s Guardian newspaper, the regime uses former members of the MEK to spread lies and deceit about the group, often touting the frequently disproved claim the MEK is a violent group that keeps members against their will.

The interview with #MOIS agent was eventually included in the final #Spiegel propaganda piece, but Spiegel didn't visit #MEK compound or pay any attention to alot of Docs revealing the identities of the interviewees(MOIS agents).#FakeNews #Spiegel_FakeNews

The regime’s most recent propaganda piece in Der Spiegel made no less than 60 false claims against the MEK. Its publication raises questions, not only about the regime’s conduct but the journalists and editors that failed to carry out even basic fact-checking procedures. If they had vetted the information, they would have found that many of the allegations and baseless lies have been debunked many times in courts around the world.

What is perhaps more troubling is that while the world’s media laps up the regime’s bile and propaganda, frequent and severe human rights abuses are going unreported in Iran. Political, environmental, and human rights activists suffer attacks, arbitrary detention, and torture at the hands of the regime’s agents, yet the international media let them pass unnoticed.

The regime has a rich history of repressing, silencing, and exploiting its population. Iran has endured 40 years of regime rule and has come to expect it from the mullahs. But now, the international media and Der Spiegel is doing the same thing. Repeating the regime’s lies and failing to hold the mullahs to account for blatant and barbaric human rights abuses is tantamount to being an accomplice in these human rights abuses.

It is the international media’s role to give voice to the downtrodden and stand up for justice. Instead, in its most recent piece, Der Spiegel gave voice to the oppressors and only served to tighten the shackles the Iranian people find themselves in.