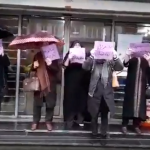 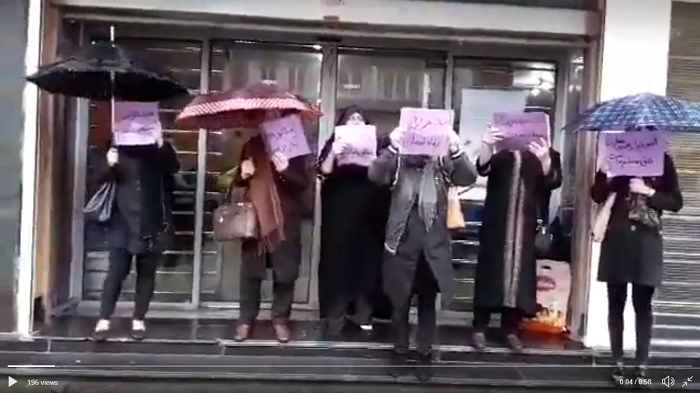 A group of looted credit firm clients protest outside one of the branches, demanding their savings to be returned to them.

On Thursday, clients of the regime-linked Padideh credit firm protested in Mashhad for the return of their looted savings. Suppressive forces were dispatched to prevent the protest from spreading, and several people were arrested after security forces attacked the demonstrators, report MEK network inside Iran.

Oct 24, 2018 – Tehran Iran
A number of the looted creditors by the Caspian institute rallied in front of the revolutionary Court in Mashahd and demand that return their deposits.
they chanting:
"They stolen our money & lie gave up our money"#IranProtests pic.twitter.com/Rhy60bSG3b

The rally in Mashhad followed a similar rally on

Keshavarz Avenue in Tehran on October 14th by clients of the Padideh and Caspian credit firms.

Protesters at that rally chanted:

“We will sacrifice our lives for freedom! Down with this cruelty!”

“Our three branches pass us to each other, leaving us in limbo!”

“Hands behinds the scenes, what have they done with our money?”

“We shall fight, we may die, yet we will not accept living in shame!”

“Theft has become legal under the cloak of law!”

Hamidreza Jalalipour, one of the regime’s experts frequently cited by the regime, warned against the spread of protests like these, which is what the regime fears most.

In an interview on state TV, Jalalipour said: “We must answer to the people’s demands… you must answer so that the society becomes calm… If we don’t pay attention to these demands, it will become concerning and I can show how since last year these protest rallies are changing and these changes must be taken seriously.”

Protest against Persia Pars firm by looted people in #Iran.
On October 23, 700 people who were blackmailed by Persia Pars firm who had registered & paid for car purchase 2 years ago with no outcome. They have been protesting outside Tehran Revolutionary Tribunal.#IranProtests pic.twitter.com/asPim5sCAQ

He went on to say: “In the past year, the people’s measures have changed… Just take a look, during the past year (and even during the 1979 revolution), we had never witnessed violence. However, in the protests of the past 12 months, we have been witnessing violence… people were angry, upset; they have difficulties, people have lost their money, yet banks were set on fire and they headed towards the prosecutor’s office… These are dangerous measures. These are concerning issues that we should be all worried about. The people’s measures must be responded to. It shouldn’t result in unrest, protests, and God forbid, violence, and then strikes… if you look at the big picture, things will get serious.”

Ahmad Hamzeh, a member of the regime’s Majlis (parliament), acknowledged that there was cause for alarm. He warned that widespread poverty could unleash a wave of jobless and hungry Iranians who would revolt.

“Do people have to pour into the streets for us to hear their voices?” he asked.