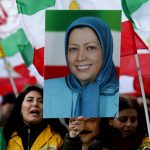 Written by Admin on September 8, 2018. Posted in MEK (PMOI) IN MEDIA, PMOI/MEK Support in Iran 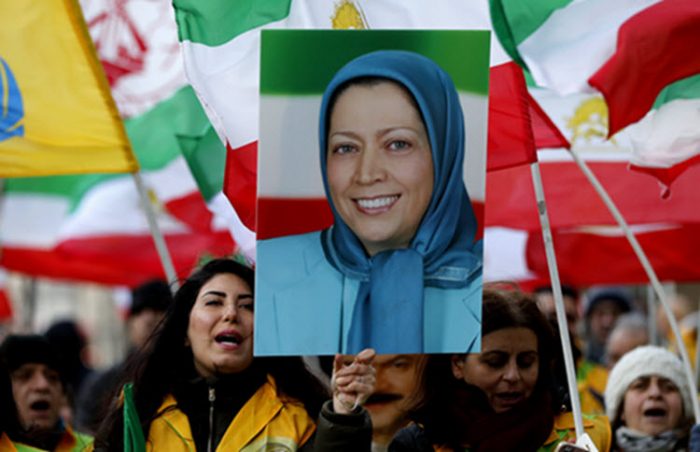 Archive photo- An MEK supporter holds a placard of Maryam Rajavi, the President-elect of the NCRI during a rally in London.

In an opinion piece, regime official Alireza Davoudi detailed his experiences with young clerics and their affinity for the democratic beliefs of the People’s Mujahedin Organisation of Iran (MEK). Davoudi describes a trip he took in March 2017 from Isfahan to Tehran. On his trip, he traveled with a young clerical student.

The student and Davoudi struck up a conversation and the topic soon turned political, as they explored the political challenges facing Iran. “I was staring at the soft and partial beard of the young cleric student while listening to passionate words flowing out of his lips”, he said, adding, “he was passionately articulating thoughts that I had only come across in the Monafeqin (The derogatory name the Iranian regime uses for MEK) literature”.

“He effortlessly quoted content from Massoud Rajavi’s Interpreting the World lecture series. He flaunted topics like ‘evolution’ and ‘the dialectical method of dominating ontological and social affairs’. He talked as though those ideas have completely conquered his mind and spirit.”

Davoudi describes the moment as a “wake-up call within myself.” At this moment, Davoudi realized the traction that MEK ideas were gaining across the population. A young cleric student, who had been exposed to regime ideology on a daily basis, had still adopted MEK ideas.

“Since then,” Davoudi says, “I have realized with every fiber of my being how destructive the influence of the enemy and especially the MEK can be, which can demolish our homeland” expressing the regime’s fear of its existential threat.

A Threat Without Boundaries

Davoudi continues. “This threat knows no bounds. It does not stop at the Hawza (religious seminary), universities, or high schools.”

“The fact is that young people need to experiment with fresh outlooks and their ‘sense of curiosity’ can lead them in any direction”. Frequently that “curiosity” Davoudi refers to, leads the nation’s youth to the MEK.

It is worth noting that Davoudi’s anecdote took place in March 2017, long before the national MEK-coordinated uprisings in December and January. Now MEK thought and slogans are much more prevalent.

The state-media and individuals from the regime have warned of the escalating threat of the MEK. Davoudi’s anecdote holds more relevance now, particularly following the August 16th seminary in Qom, where anti-Rouhani clerics held a placard directed at Rouhani which read, “Farah’s pool is your fate”.

Davoudi concluded, “I am not even going to mention that some of the circles that are formed in religious seminaries are directly or indirectly associated with the MEK”. He didn’t need to. The sentiment is clear. MEK thought and democratic ideas are gaining traction across all sections of Iranian society.

Even the religious seminaries, once a bastion for regime ideology, are undergoing a democratic transition. Nowhere is safe for the mullahs.