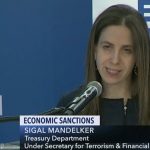 U.S. Sanctions Could Lead to International Pressure Against Regime 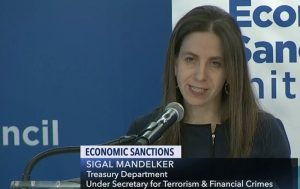 On Tuesday, June 5th, the U.S. Treasury Department’s Undersecretary for Terrorism and Financial Intelligence, Sigal Mandelker, gave a speech to the Foundation for Defense of Democracies. The Washington, D.C.-based think tank asked Ms. Mandelker to describe how the Iranian regime finances unethical activities at home and abroad. According to Mandelker, the Iranian regime has consistently supported terrorism, destabilized the Middle East, and carried out human rights abuses against its own people, even while the Iran nuclear deal, signed in 2015, was in effect. The MEK had stated from its inception, that the deal was weak and ineffective.

Ms. Mandelker’s remarks took place almost one month after President Trump announced that the U.S. would withdraw from the Joint Comprehensive Plan of Action (JCPOA), also known as the Iran nuclear deal, and two weeks after Secretary of State Mike Pompeo revealed the U.S.’s new plan for Iran, which he said would include “the strongest sanctions in history” if Iran failed to curtail its objectionable activities.”

Ms. Mandelker also pointed out that secondary sanctions would be issued against any European businesses who continue to do business with Iran while using the U.S. financial system. In her speech she said, “We will hold those doing prohibited business in Iran to account.”

Ms. Mandelker appealed to the global conscience of democratic nations when she said that Tehran exploits “the global financial system, as well as country after country around the world” to finance its activities. She warned that these countries might become an unwitting accomplice to Iranian atrocities by allowing their national wealth to be used by the regime.