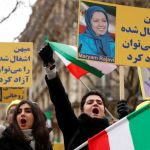 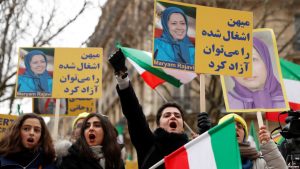 MEK Rally in Paris, in support of Iran Protests-2018

A new study was written by Dr. Ramesh Sepehrrad, a scholar-practitioner at the School of Conflict Analysis and Resolution (SCAR) at George Mason University, published in the journal E-International Relations on May 21st draws attention to the growing unrest in Iran. The uprising that began last December gave voice to a growing number of Iranians who are tired of the regime’s shallow claims of reform and are demanding regime change. Sepehrrad’s paper discusses the roots of the uprising, the reason for its widespread impact, and its potential to start a revolution in Iran.

The scope of the Protests

According to Sepehrrad, the recent uprising in Iran began with a protest in the northeastern holy city of Mashad over rising food prices and quickly spread into a massive uprising that took place in 140 cities across Iran. During the two weeks before the regime temporarily suppressed the uprising, the scope of the protests grew from economic conditions to inequality, to corruption, and finally to calls for regime change.

The people protesting came from all walks of life, but the first protests were led by Iranians from the lower middle-class whose standard of living has decreased dramatically in recent years. They were joined by large numbers of women and youths who rose up in solidarity with those struggling through poor economic conditions. As the uprising grew, more people joined the ranks of protesters, including members of Iran’s many ethnic groups, including Turks, Kurds, Turkmen, Arab, Taleshi, Baluch, Lor, Bakhtiari, and Ghashghai, and the uprising began to look more like a coordinated effort and less like scattered protests. The regime attempted to paint the protesters as looters and criminals, but, as Sepehrrad wrote in her paper, this argument was invalidated by the fact that no looting occurred. The uprising was well-organized and goal-oriented, not a few protests by the poor and desperate.

Sepehrrad pointed out that Iranian regime’s Supreme Leader, Ali Khamenei later acknowledged the role of the MEK in the uprising in an attempt to frighten people and prevent further protests. The regime’s record of brutality to the MEK is well-documented. In the summer of 1988 alone the regime executed 30,000 political prisoners, most of whom were MEK members. By acknowledging the MEK’s role in the uprising, the regime hoped to discourage protesters who did not want to meet the same fate as the tens of thousands of MEK members who have been targeted by the mullahs, but instead, they inadvertently lent credibility to the resistance organization and its goal of regime change.

According to Sepehrrad, the December 2017/January 2018 uprisings were unique in several respects. For one thing, the protests were widespread, occurring in 140 cities over the course of two weeks. Protests occurred both in cities and in more rural areas. This was partially due to the use of social media, specifically Telegram, to spread the word of the uprisings. Government censorship efforts tend to cluster in the larger cities in Iran, so protesters in smaller cities were able to bypass state censors to get their message out in a way that would not have been possible in Tehran. The Revolutionary Guards Corps (IRGC) is also more densely clustered in larger cities, meaning that protests in small cities were not quickly or easily suppressed before word could spread. In addition, the protests began because of frustrations with economic conditions. The poor are disproportionately located in smaller cities, so the places where protests could spread more easily were also the places where more people felt compelled to protest.

Sepehrrad found that protesters also utilized social media to collect data about the uprising. This information is an invaluable resource for predicting future acts of resistance by the people. Sepehrrad claims that the data gathered during the uprising shows a new model of protest in Iran that encompasses diverse groups and locations.

Sepehrrad also wrote about the unity shown by the protesters. People protested for many reasons, but all of the protesters were united by their desire for regime change. According to Sepehrrad’s research, 65% of protest signs seem during the uprising called for regime change. This was extraordinary for such a diverse group of people. The poor, women, young people, legitimate political groups, the labor movement, various ethnic groups, and representatives from every social class banded together to demand change. This sort of unity in protest has been seen historically in revolutionary settings.

The data collected during the uprising provided a picture of the protesters and their goals. Sepehrrad found four major themes in her analysis of the data.

Goals and Tactics of Protesters

Protesters shared the common goal of regime change, but Sepehrrad found that there were a number of different issues that led people to rise up. Economic conditions caused many people to rise up. The lower middle class made up a large percentage of protesters because this group has been forced into poverty by the regime’s policies. Under the ruling regime, economic disparities between regime officials and their families and the rest of the country have disillusioned many Iranians. The regime has been accused of financial corruption, leading to unequal access to wealth that has caused widespread poverty amongst Iranians. Numerous allegations of corruption by the members of the regime have been made, and these claims have been substantiated by a report by Transparency International, which ranked Iran 131 among 178 countries.

According to Sepehrrad‘s research, 40% of Iranian citizens in large cities live below the poverty line, and 60-70% of people in smaller cities and towns live in poverty. Young people, educated women, and college graduates are chronically unemployed or underemployed, with the regime acknowledging a 35% unemployment rate among the nation’s youth and a 52% unemployment rate among women.

In addition to the epidemic of poverty, Iran’s housing crisis has been unaddressed by the regime, leaving many living in dire conditions. Sepehrrad estimated that 25% of the population has been affected by this crisis. The environmental crisis caused by the regime has compounded the inhumane living conditions faced by the people. According to Sepehrrad, the regime’s mismanagement has led to the drying of 90% of the country’s wetlands, leaving many without access to water.

The Role of Social Media

The increased access to the Internet and social media drove many to demand change. Despite the regime’s efforts to censor online material, Iranians have found ways to connect with each other and the larger world. These people, particularly women and educated youth, see the disparity between the rights enjoyed by people in other countries and the oppression and inequality experienced within Iran. They protested for greater individual freedoms, freedom of the press and freedom of association.

According to Sepehrrad, the increase in access to online information has also given the Iranian people access to unbiased news, and not just the propaganda published by the state. This has drawn attention to the 1988 massacre of political prisoners, a majority of whom were MEK members. Some of the biggest sites of protests were in cities where mass graves of the executed 1988 political prisoners were located.

Sepehrrad added that increased access to social media has also led to greater awareness of the plight of political prisoners. Word travels fast on the Internet, and now when someone is detained for the crime of speaking their mind, the rest of Iran knows about it. Iran’s abysmal human rights record (17 out of 100 points, according to Amnesty International) has led many to feel that Iran is unreformable. For many, the only solution to Iran’s problems is regime change. This sentiment, expressed by a large and diverse group of Iranians spread across the country, is the main ingredient of a revolution.

Protests did not end when the uprising was suppressed and continue each day in cities across Iran. In late January of 2018, protesters began using a secure crowdsourcing tool to communicate with each other about upcoming protests, resistance efforts, and the current locations of security forces. They also take videos of events in Iran to share with the rest of the world.

Sepehrrad noted that the use of purposeful collective action has been a factor in the uprising and continuing protests. Protesters have unified to act against the state in a coordinated fashion. Sepehrrad wrote that targets of these actions include “local religious leaders and centers, security forces and personnel, government-controlled financial institutions and banks, judicial branches, and government offices.” Protesters have taken down and burned images of the Supreme Leader in numerous cities. This action, in particular, has energized the resistance movement. Collective action is still occurring in Iran as part of ongoing protest efforts.

The MEK’s Role in the Uprising

According to Sepehrrad and the regime itself, Tehran has placed responsibility for the uprising on the MEK, who did indeed play a large role in organizing protests. But the seeds of dissent have been present among the people of Iran for decades. The MEK is simply an expression of the dissatisfaction of the people with the current regime.

The usual practice of the regime is to violently suppress any dissent. But Sepehrrad noted that those calling themselves “reformers” have been more hesitant to violently act against their own people. The uprising has given these reformers pause, and they have had to backtrack on many of their “reformist” views because it is clear that the people are serious about regime change. Sepehrrad wrote that on January 24, 2018, one of the senior pundits of the so-called “reformist” faction admitted that these protests will come in waves and as they recede, “they will come back stronger.”

The MEK has long been a target of the regime’s wrath, wrote Sepehrrad, as they are the largest and oldest resistance movement in Iran and have had success in opposing the mullahs’ rule. The regime has spent significant time and political capital in an attempt to delegitimize the movement and have claimed repeatedly that the MEK has been diminished and has little influence or support from the Iranian people. But the recent acknowledgment by the regime of the MEK’s role in the growing unrest runs counter to their argument that the MEK does not speak for the people. The large and widespread uprising that took place clearly shows the will of the people, and their goals align with the MEK and its longstanding position that meaningful change can only happen with the end of the mullahs’ rule.

Sepehrrad’s paper demonstrates that the uprising and continuing protests in Iran are not scattered acts of resistance. The large-scale nature of the protests, their continuance despite attempts by the regime at suppression, their diverse makeup, and the unity displayed by the protesters point to revolution. The use of social media has made Iranians more aware of their shared concerns and has enabled them to organize more effectively. The people have no desire to negotiate with the regime. Their message is clear. Revolution is the only way to bring true reform to Iran. Sepehrrad’s paper may be read in its entirety on the E-International Relations website.