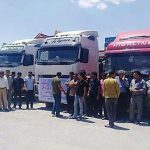 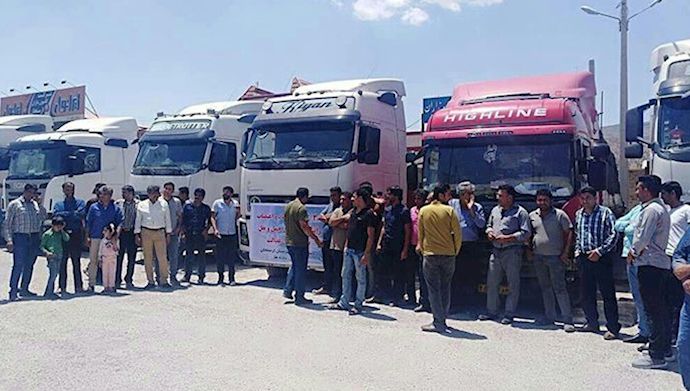 One of the Lorry’s terminals in Iran who have joined the national strike against high prices and regime’s repressive measures.

In scenes that are becoming all too familiar, the truck drivers strike has entered its second week in Iran. As the strike has spread, the regime has become more determined to end it.

220 towns and cities across Iran have now been affected by the strike. Truck drivers across the country have put down their keys in protest over low wages, high repair costs, and the lack of sympathy from the regime in an industry that is becoming economically unfeasible.

As the strike has spread and the Iranian regime feels the strain in its logistics sector, the leadership have attempted intimidate the protestors into resuming their work.

Through state-run media outlets, the regime has issued threats of execution to the striking truck drivers. It has also arrested more than 15 strikers in an attempt to curb the spread of the strike.

Despite the threat of life-threatening repercussions, the determined and courageous drivers have continued to strike. The protestors and the Iranian public have taken the threats for what they are; the rumblings of a regime in crisis, rapidly losing grip on power.

The Support of the Iranian Resistance

The Iranian opposition movement has lined up to pledge its support to the striking drivers. The President-elect of the National Council of Resistance of Iran and leader of the People’s Mujahedin Organisation of Iran (MEK), Maryam Rajavi, took to Twitter to send her message of support.

Ms. Rajavi, who is living in Albania in exile with other members of the MEK, urged the youth of Iran to stand with the striking drivers, in a message that was shared and liked by over 1,000 Twitter users.

It read, “I call on Iran’s youth to support the drivers who are on strike.” Maryam Rajavi went on to call on the international community to take measures to stop the regime inflicting violence on those protesting.

“I urge human rights authorities to take action to secure the release of those arrested. When [a] regime threatens strikers with death, it must be isolated by the international community”, she wrote.

The message comes after the leader of the clerical regime, President Hassan Rouhani made a recent visit to New York to attend the United Nations, General Assembly. While he was there, Iranian-American protestors gathered in a nearby square to protest his presence.

The Iranian regime is employing increasingly violent responses to civil unrest across the country. As Khamenei and Rouhani attempt to prop up their regime, the Iranian public is being held, hostage. Human rights abuses are widespread, and executions are becoming increasingly frequent. 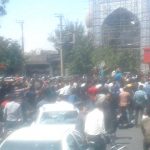 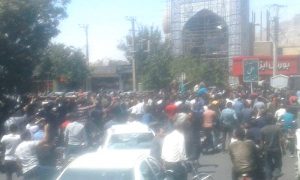 The truckers and lorry drivers strike has drawn attention from the Iranian population, the regime, and the international media. This attention led to large crowds in Ishafan gathering in support of the striking truck drivers.

On August 1st, 2018, the strike from owners and truck drivers in Isfahan entered its second day. As the protest spread, shopkeepers, young Iranians, and other civilians disenfranchised by the mullahs’ repressive and violent regime took to the streets. The crowd marched down the city’s main streets, chanting “death to the dictator”, “death to high prices, death to unemployment”, and “incompetent officials resign, resign”.

The truck driver’s strike in Isfahan is one part of a wider, national strike, undertaken by truck drivers over poor working conditions and economic decline. The most recent national strike began on July 24th, quickly spreading to major Iranian cities, including Mashhad, Qazvin, Farrokh Shahr, and Marand.

#IranProtests#Iran opposition NCRI issues a report on the fourth consecutive day of truckers' strike throughout the country.https://t.co/skOLG6IoXf

The truck drivers are demanding an increase in wages, which have stagnated despite soaring inflation, lowered insurance premiums, lowered prices for replacement truck parts, and reduced highway tolls. The first round of strikes, which began in May and lasted for 11 days, did not yield results.

Commission fees have become a way for the mullahs to extort money from the nation’s truckers. The state-run ILNA news agency reported that logistics firms have to pay transport commissions of up to 10% of the cargo’s worth. Some shipment companies have been reported asking commissions up to 40%.

Much like the May strike, the latest round of strikes has been met with an aggressive response from the regime. In Isfahan, the regime sent its security forces to disperse the crowds and bombarded those gathered with tear gas.

The protestors in Isfahan fought back against the agents of the regime. They burnt tyres to mask the tear gas. They would not be deterred and continued their protests in the face of mounting oppression.

The trucker’s protest is just one part of Iran’s growing opposition protest movement. The People’s Mujahedin Organisation of Iran (MEK) has been a driving force behind a growing opposition movement. Maryam Rajavi, leader of Iran’s main opposition and the President-elect of the National Council of Resistance of Iran (NCRI) has been instrumental in drawing support and international recognition for the Iranian opposition movement. Rajavi threw her support behind the Iranian truck drivers, and all those resisting the mullahs’ rule across Iran.

On July 31st, the people of Karaj mounted their own protest, taking over Gohardasht First Square. Again, the regime fought to bring the situation under control, but the determined people of Karaj erected barricades to block the movement of the regime’s forces.