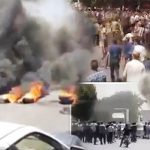 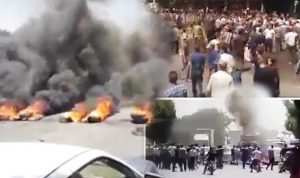 Protests, strikes, and demonstrations have spread throughout the cities and towns of Iran in response to the country’s crumbling economy. Protests began early last week with a merchants strike after the rial plunged in value yet again. The rial has dropped 120 percent in the last six months alone, leading store owners to close their shops and take to the streets to protest rising costs.

The merchants were soon joined by truck drivers (who were already in the midst of a weeks-long strike of their own), farmers, workers, the unemployed, and young people. The protests spread rapidly to other cities, and calls for regime change have been widespread. Protesters have chanted, “Death to the dictator!” “Mullahs must go!” and “Rouhani be ashamed, let go of our country!”

The protests have now grown into an uprising, spreading to every major city in Iran over the past week. Protesters have confronted suppressive forces in the streets, using police tear gas to set fire to tires and police motorcycles.

Shahin Gobadi, a spoke person for the people’s Mojahedin Organization of Iran (MEK) who is also a member of the National Council of Resistance of Iran’s (NCRI) Foreign Affairs Committee, gave an interview to the British website Express.co.uk. He said that the continuous nature of the Iran protests sends a clear message:

“The Iranian people are determined to bring about a regime change and they are not going to stop at anything short of that. The prospect for the mullahs to find a way out is becoming dimmer by the day.

“This is why the regime’s senior officials keep warning about the bleak prospects that loom on the horizon for the regime and the growing role of the resistance.

“As such, the regime’s official in charge of dealing with “soft warfare” stated on August 1, that 90 percent of the strikes and calls for protests are the result of activities of the “counter-revolutionaries”, ie the Iranian resistance.”

In regard to the Iran nuclear deal, Mr. Gobadi had this to say:

“It is time for the European countries to see the fast-moving realities in Iran and forgo any deals with the Iranian regime.

“Rather they should hold the clerical regime accountable for all its malign activities and side with the Iranian people and their aspirations.

“We would welcome any serious and tangible retreat by the mullahs because that would ultimately serve the interests of the Iranian people and the resistance units to bring down the regime and to establish democracy.

“But as the regime’s supreme leader, Ali Khamenei, has said time and again the regime is incapable of any major change of policies and change of direction.

The daily Express also quoted Maryam Rajavi, the president-elect of the Iranian opposition emphasizing: ‘The Iranian people’s nationwide uprising is growing by the day. Hail to the peoples of Isfahan, Gohardasht of Karaj, and Shiraz.”

The MEK believes that the only way to bring meaningful change to the Iranian people is through regime change. The economic problems facing Iran right now are dire, but they are not new, nor are they solely a result of sanctions. The rial has been losing value since the regime took power in 1979, due to the clerical regime’s corruption and incompetence.