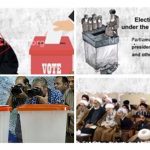 Written by Esmail Mohades on February 16, 2020. Posted in NEWS

Mullah’s shame elections will be defeated by the Iranians as they boycott it.

Iran’s 41st legislative election is not like any other in the history of the Islamic Republic.

Out of 16033 candidates, more than 55% were discarded by the vetting organ called the Guardian Council and cannot take part in the election. Candidates close to the mullahs’ president Hassan Rouhani are the most touched. Even 90 incumbents members of the Majles – the mullahs’ parliament – have been purged from the next election.