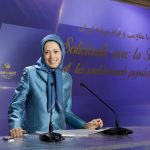 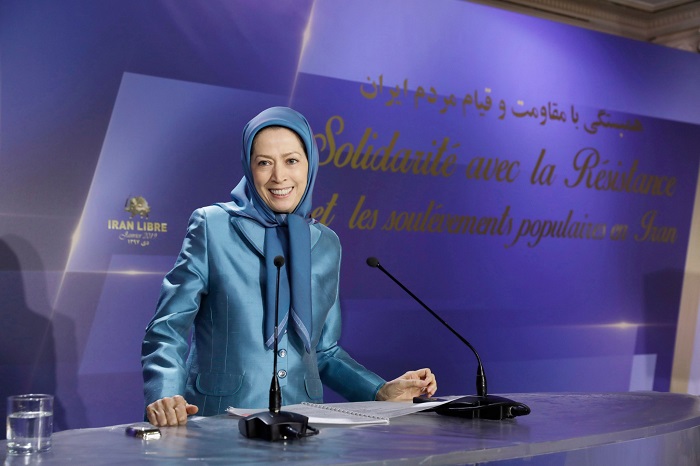 Maryam Rajavi, the President-elect of the Iranian opposition addresses a crowd of French supporters of the MEK- Auvers Sur Oise-January 13, 2019

On Sunday, January 13th, Mrs. Maryam Rajavi, President-elect of the National Council of Resistance of Iran (NCRI), spoke at a ceremony in France celebrating the New Year, which was attended by a number of distinguished supporters of the MEK and the Iranian Resistance.

In her speech, Mrs. Rajavi discussed the events of 2018 and then spoke about the current state of the Iranian Resistance and the Iranian regime as a new year begins.

In summing up 2018, she said, “The most significant development in Iran was the outbreak of popular protests and uprisings against the mullahs’ regime.

“Everyone saw how terrified the mullahs were. They were particularly scared of the role of the Mojahedin [MEK] in the uprisings.”

Mrs. Rajavi spoke of the relocation of MEK members from Iraq to Albania: “When Ashraf residents were in Iraq, they were exposed to the danger of massacres and missile attacks by operatives of the Iranian regime,” she said. “Today, however, they have built a small township in Albania, called Ashraf 3.”

“For this reason,” said Mrs. Rajavi, “One can conclude that the regime has clearly regressed in status and the Resistance has obviously progressed.”

The mullahs have no solution to offer for the economic bankruptcy. They have no solution for the environmental disasters and against the protesters. They are particularly bewildered in the face of the upcoming uprisings. #Iran #IranRegimeChange #NewYear2019 pic.twitter.com/HQoELIVbMs

Mrs. Rajavi went on: “They are particularly bewildered in the face of the upcoming uprisings. Just recently, the mullahs’ supreme leader warned that the enemies are planning for the next year.
This is why the mullahs who are unable to confront the uprisings, have found their only way out in terrorism against the Iranian Resistance.”

Mrs. Rajavi described the regime’s foiled terrorist plots against the MEK in Paris, Albania, the United States, and Denmark last year. She also discussed the mullahs’ latest demonization campaign against the Iranian Resistance.

Mrs. Rajavi then detailed the consequences that the Iranian regime has faced for some of these actions over the past year: “In 2018, France expelled an Iranian regime diplomat and froze the assets and properties of the mullahs’ Ministry of Intelligence.”

She followed with more examples: “Albania also expelled the regime’s ambassador and the Intelligence Ministry’s station chief. And the Netherlands also expelled another two diplomats of the clerical regime.”

Finally, she added, “On Tuesday, the European Union announced sanctions against the Iranian regime’s terrorism and its intelligence services.”

Mrs. Rajavi restated the Iranian opposition’s stance on dealing with the mullahs. “We have always urged western governments to be firm against the mullahs’ terrorist dictatorship,” she said. “So, today, we urge them to expel the mercenaries of the mullahs’ Intelligence services and the terrorist Qods Force from the U.S. and Europe.”

She continued: “We also urge democratic countries to support human rights in Iran. The only force which could end the Iranian regime’s terrorism and belligerence is the uprising of the people of Iran with their organized resistance.”

“In the early days of the New Year, the world must listen to the cries of protesters in Iran. They want freedom and democracy. They want a republic based on the separation of religion and state.”

Mrs. Rajavi concluded, “I am confident that with the support of freedom-loving women and men like you, and with the endurance of the people of Iran, the Iranian Resistance will establish freedom and democracy in Iran.”