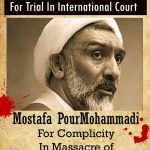 Ayatollah Montazeri, regime’s ex-Supreme leader’s heir, ina taped message revealed the extent of the massacre of the MEK supporters, calling it “the greatest crime committed in the Islamic Republic, for which history will condemn” the mullahs ruling Iran for.

In a July 24, 2019 interview with the state-run Mosalas magazine, Mostafa Pour-Mohammadi, Advisor to the Iranian regime’s Judiciary Chief and former Interior and Justice Minister defended the regime’s mass execution of 30,000 political prisoners in the 1988 Massacre and further vowed to carry on the regime’s efforts to seek out and kill MEK members until the group was eliminated.

Pour-Mohammadi was appointed to Tehran’s Death Commission in the summer of 1988 by regime founder Ruhollah Khomeini. The Death Commissions were tasked with carrying out Khomeini’s fatwa decreeing that all MEK political prisoners in Iran must be executed.

#Iran #1988massacre
In those days, nobody found out what happened
2d freedom-loving youth, & unfortunately,
Western societies stayed silent with their appeasement
and securing their interests, pic.twitter.com/Van5YMPWBa

More than 30,000 political prisoners were executed over the course of the summer of 1988, most of whom were MEK members. To date, none of the perpetrators of this crime against humanity have been brought to justice. Many of those responsible for the executions have gone on to serve as high-ranking members of the regime.

Pour-Mohammadi made a number of shocking statements about the 1988 Massacre, along with direct threats to the MEK, some of which are translated and excerpted below:

Unfortunately, he has no shame about his role in the #1988Massacre
He recently had an interview with Mosallas sate-tTV, he said: We are not yet done with #MEK, this is no joke!
No time to talk but only to clear them out. They must be trialed. @UNGeneva @USUN #HumanRights pic.twitter.com/2l70tWUquf

Question: A major accusation against the Islamic Republic, which is usually picked up by foreign news organizations, relates to the issue of the ‘Hypocrites’ [MEK] and the manner in which the Islamic Republic dealt with the MEK, the height of which was in 1988. You were in the Foreign Intelligence Department and had a role in this affair. You can explain how you were involved.

Mostafa Pour-Mohammadi: Look, your enemy is lying. It is making accusations. It is resorting to any evil act. It has no barrier. It is coordinating in detail with your enemies and does not hesitate to carry out any action against you. Imagine we are in the middle of this. Do you expect us to simply announce all our operational plans and those issues that they can use to their advantage and clobber us with every day? So that they sideline and cover up 100 of our logical and correct statements in the media, and expose two of our points which we accept are our weaknesses so that they can present an important point of history using just two or three issues and events, and cast this image in the public mindset? This is certainly not the right thing to do. They are blowing their propaganda horns and concentrating on this story.

When the criminal, traitor enemy [MEK] is carrying out operations as a brigade of the enemy [Iraq], are we really expected to talk about legal debates and civil and humanitarian protections when we are in the middle of a war, and say, ‘this happened here’, ‘that happened there’?.. 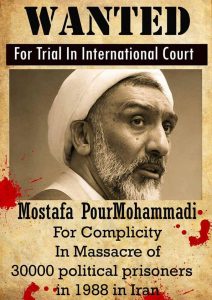 Mostafa PourMohammadi, member of the “Death Committee” during the 1988 massacre of 30,000 political prisoners (mainly MEK activists) who were slain by a direct fatwa from the Iranian regime’s supreme leader, Rouhollah Khomeini.

Question: So the context of this saga was the war that was taking place.

Pour-Mohammadi: … Can you have an enemy that is worse than that? They destroy your image all around the world. There has not been a single case of such destruction in the past 40 years, other than those in which the MEK has had the leading role. We have not yet settled the score with the MEK. We will discuss these matters after we eliminate them. We are not joking. They need to come and answer for their crimes and treachery. … And now you want me to come forward and answer, in legal terms, why I threw a grenade into the wrong place or acting incorrectly? The MEK are all criminals. They must all be prosecuted in court. Under any law in this world, all of them have killed people and have waged war, and they must all face capital punishment.”

Question: Even those who were in prison [at the time]? Except for those who repented?

Pour-Mohammadi: Look! When you commute a sentence, on a temporary basis, for a criminal terrorist in prison, and then he behaves like he is taking part in the depth of the conspiracy and is cooperating [with the enemy], are you supposed to be dimwitted and simplistic and let him carry out any operation? Who would do that?

Question: Those who were executed were all collaborators?

Pour-Mohammadi: Look. These were the minimum legal protocols that were adhered to. No one doubts this. We were told to accept the word of even those who falsely repented. But when someone is involved in an operation plot, has plotted his escape, is planning to take over Jamaran [Khomeini’s home] the next day, kill the Imam [Khomeini] and his entourage, and take over the state broadcaster and all government centers, and has received an operational plan telling him where to go; are we supposed to be simplistic and say: ‘No, you weren’t on the frontline. You were backup forces. You were spying. You were a mechanic [for their] vehicles.’ Huh? Is that what we were supposed to say? Whoever is in the enemy lines is the enemy. What are we supposed to do to the enemy? We are supposed to fight the enemy. We have not yet eliminated them. Now’s not the time for such talk. Now’s the time to root them out. Today as well, the MEK is the most treacherous enemy of this nation. They need to come and answer and stand trial. We have to deal with each and every one of them…

I think the issue of the MEK is clear. We have no ambiguity about the MEK. We are at a time of war. Now is not the time for talk. Now is the time to fight them, now is the time to subdue them. Now is the time to conduct prosecutions. It is time to put the criminal world that defends terrorism in its place. Now is not the time to give legal answers and say for example, ‘this judge acted well’, ‘this judge acted poorly’ or to ask whether this file was closed properly. Yes, perhaps the Judiciary might have many weaknesses, and it might make a mistake now and then. Are we supposed to defend our mistakes? But, the issue is not about a mistake having been made. This whole issue is immaterial and does not merit attention. But, I think once, God willing, we get rid of the MEK, then these matters will become more clear with greater detail.

Amnesty International issued a statement in response to Pour-Mohammadi’s interview expressing alarm at the lack of accountability from the perpetrators of the 1988 Massacre and the continued threats to the family members of the victims of the crime. The statement read, in part:

“The organization is particularly concerned about comments by Mostafa Pour Mohammadi accusing those advocating for truth and accountability of ‘terrorism’ and ‘collusion’ with Iran’s geopolitical enemies, and warning that they shall face prosecution. These comments, coupled with the appointment, in March 2019, of Ebrahim Raisi, who, like Mostafa Pour Mohammadi, was involved with the mass extrajudicial executions of 1988, to the position of the head of the judiciary, put survivors, family members of those executed and human rights defenders at increased risk of harassment and persecution simply for seeking truth and justice.” 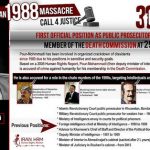 Regime Official Claims Iranian People Are “Better off than Europe” 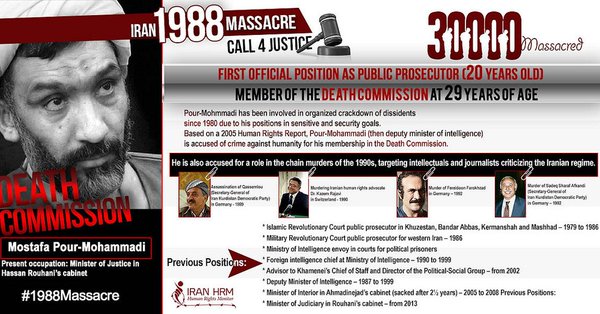 Last week, Mostafa Pourmohammadi, the regime’s  Secretary-General of the Combatant Clergy Association denied the suffering of the Iranian people, saying,” Today, our people are better off than Europe in terms of welfare.”

“Iran’s poverty is not out of hunger. It is rather a deficiency of welfare and desirable employment because expectations are based on new demands,” Pourmohammadi added.

The shocking statement came during a May 15th meeting with clerical leaders and was intended to counter growing unrest in the country over skyrocketing inflation and widespread poverty. Pourmohammadi’s claims were based on the false premise that Iranians feel poor not because they have been deprived of basic necessities, but because they have unreasonable expectations.

Pourmohammadi, who served as the regime Minister of Interior from 2005 to 2008 and also headed the General Inspectorate Office, is either willfully ignorant of the regime’s own statistics on Iran’s current economic state or he is choosing to ignore them. According to figures from regime officials, 80% of the Iranian population live below the poverty line.

The economic crisis in Iran has caused massive unrest across the country, and the regime has done nothing to address it. Labor activists say that the minimum wage in Iran is half of the line of poverty. For example, in Tehran, the poverty line for a family of four is four million Tomans (currently about 260 USD). The minimum wage is 1.8 million Tomans (about 170 USD), less than half of the poverty line.

A woman, with 2 small children, searching the trash for food scraps
The #Iranian Parliament’s Research Center published a report in which figures for the next 12 months show that between 23 & 40 percent of #Iran ’s population will soon be living under the absolute poverty line. pic.twitter.com/OAhPjXQcXC

Compounding the issue is the fact that many workers do not receive their paychecks for months at a time. Factory workers, teachers, railway workers, construction workers, healthcare workers, and municipal workers have all protested for payment of their overdue wages over the past year. The regime has responded to these strikes and protests with violent suppression, conducting midnight raids of workers’ homes and arresting peaceful protesters.

Faced with no other options, some Iranians have been forced to sell their organs to make ends meet. Others have been driven to suicide. If Pourmohammadi’s definition of “new demands” are the expectations that a job will pay its employees for their work and that the wages from that job will cover basic needs, then he is correct that the Iranian people have expectations that are not being met.

Pourmohammadi’s remarks are best understood in the context of his past actions. In 2013, the cleric was appointed to the position of Minister of Justice. Pourmohammadi said that he hoped “to promote justice” at the Ministry.

Pourmohammadi’s appointment to Minister of Justice was a slap in the face to the family members of thousands of political prisoners who were executed on his orders.

In the summer of 1988, Ruhollah Khomeini, the founder and Supreme Leader of the Islamic Republic, issued a fatwa ordering the executions of all imprisoned MEK members. He formed three-person “death committees” to carry out trials that lasted only minutes. Each committee consisted of an Islamic judge, a Ministry of Intelligence Representative, and a state prosecutor.

Montazeri, who later expressed remorse for his role in the massacre, said that Pourmohammadi was a “central figure” in the mass executions of 1988.

Pourmohammadi has expressed no such remorse. In 2016, he said that he was “proud to have carried out God’s commandment concerning the People’s Mojahedin of Iran.”

“I am at peace and have not lost any sleep all these years because I acted in accordance with law and Islam,” he added.

30,000 political prisoners, most of whom were MEK members, were executed during a single summer in 1988. None of the perpetrators have ever faced justice for their roles in the massacre.