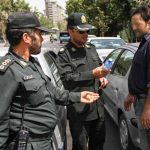 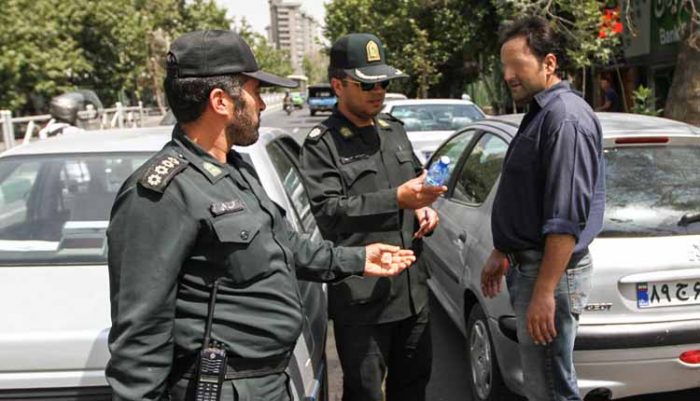 Photo credit to Iran-hrm.com: The repressive security forces harassing a man for eating during the month of Ramadan

On May 22nd, Mohammad Reza Amouie, the Social Deputy of Kermanshah Police, announced that during the first half of Ramadan his department had warned 800 stores for selling food during the fast and closed 87 others for “ignoring police warnings,” according to a report from the state-run Mehr news agency.

In addition, Amouie said that police in the province had taken written commitments from 1,731 people against openly eating in public and detained another 412 people for eating publicly. Police filed cases against 170 of those who were detained.

Roughly 30 individuals taking part in a private yoga session were detained in #Iran, according to reports. The people were arrested in the northern city of Gorgan, where they were apparently taking part in a mixed class. #HumanRights https://t.co/TbDUKQh0Uv pic.twitter.com/fyeleEBSLO

Amouie added that 569 drivers were given warnings for eating and drinking in their cars and that those who ignored the warnings had their cars seized. 49 cars have been impounded so far.

The state-run Tasnim news agency reported that officials shut down five stores in the city of Kouhdasht in Lorestan Province for selling food during the Ramadan Fast.

The ban on eating or drinking in public does not apply to children, people with health problems, travelers, or non-Muslims. However, it is not always evident at first glance if someone has a health issue, and police have been ramping up arbitrary enforcement of laws in the ongoing crackdown on the Iranian people.

Iran’s Islamic Penal Code does not explicitly forbid the public consumption of food or water during the Ramadan fast, but it does allow for punishment of harām (sinful) acts under Article 638, which states:

A Wider Pattern of Crackdowns

This same article was recently used to justify the enforcement of a ban on public cycling by women. It was declared a harām act by regime Supreme Leader in a 2016 fatwa, but the ban was loosely enforced in the city of Isfahan until earlier this month when pressure from clerics led to a crackdown.

These crackdowns are part of a wider pattern of suppressive actions by the mullahs’ regime in recent months as they desperately try to hold onto power. Iranian men were warned at the beginning of Ramadan to avoid looking at women at all and told that those in violation could face punishment by the morality police.

The MEK’s political platform states, “We are committed to the separation of Religion and State. In our view, any form of discrimination against the followers of any religion and denomination will be prohibited.”

Under the mullahs’ regime, religion has become a weapon of the state. The MEK believes that this is not the purpose of religion or of government and that people should be free to practice their faith as they see fit. 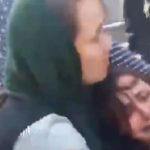