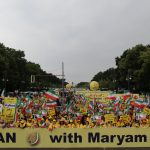 A large crowd of over 15,000 Iranians, supporters of MEK in Berlin, show their solidarity with Iran uprising, during the Free Iran rally- July 6, 2019

Recent changes in the White House caused many reactions with different attitudes. Some still seeking appeasement policy toward Iranian regime took the advantage of this event to show their opposition to a firm policy vis-à-vis the world’s most active state sponsor of terror, religious fascism ruling Iran, and attacking the democratic opposition, National Council of Resistance of Iran (NCRI) and Mujahedin-e Khalq (PMOI/MEK) to justify their support for the terrorist regime of Iran.

Jason Rezaian, a well-known advocator of an appeasement policy, in his Sep 10 Global Opinions column in Washington Post wrote: “The shake-up creates the first real opportunity for Trump to pursue a policy of engaging Iran.”

Mr. Shahin Gobadi, the MEK Press Spokesman in Paris, in an article entitled: “Misplaced and Premature jubilation by an apologist of the murderous mullahs of Iran” discusses this issue.

He challenges the Rezaian’s allegation about MEK and its popularity in Iran writing:

” How does Rezaian know of the true level of support that the MEK enjoys inside Iran under a totalitarian state? What is his measure of sufficient evidence for the MEK’s popularity in a society as complex and repressed as Iran? And how did he conclude that the MEK is reviled by Iranians in a country of over 80 million!? Who are his sources? The Iranian regime and its lobby in the west who want to insinuate that there is no viable alternative to the ruling theocracy and therefore, it must be engaged.” 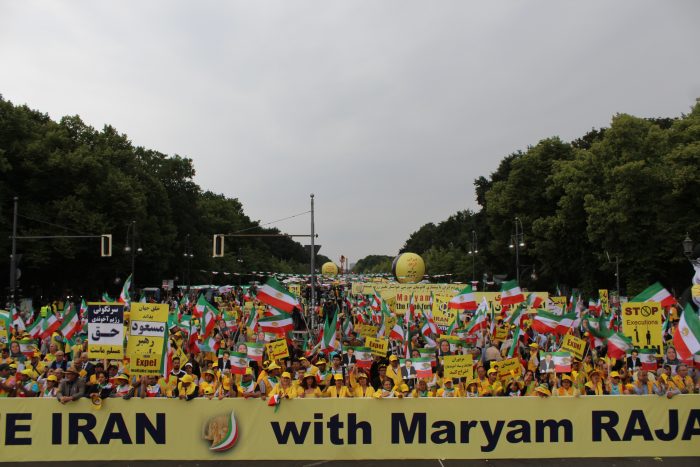 Free Iran Rally in Berlin- Nearly 15,000 thousands of supporters of MEK, took to the streets in Berlin to show solidarity with the uprisings in Iran.

” Rezaian’s absurd claim that MEK “can claim no popular support” loses muster in face of the facts on the ground. Outside Iran, where Iranians can express their views without the fear of being persecuted, tens of thousands of MEK supporters held major rallies in five major European capitals, Paris, Brussels, Berlin, Stockholm, London and in Washington, DC to call for regime change. Indeed, the three-hour-long rally and march from the State Department to the White House, not only snarled traffic in the nation’s capital for several hours, but it also caught the attention of the mainstream media, save for the Post. Even the White House noticed the elaborate and well-organized rally. “What we want to do is stand with the Iranian people, thousands of whom gathered outside the White House on Friday, and tens of thousands of which, took to the streets last year in communities across Iran, we want to stand with them” Vice President Mike Pence told CBS’s Face the Nation on June 23, 2019.” Mr. Gobadi added.

The Spokesman of the MEK in Paris, argues that advocators of appeasing mullahs, including Rezaian, hardly can understand this reality that the religious dictatorial regime in Iran is in a strategic dead-end.

In conclusion, Mr. Gobadi writes: ” The era when the mullahs could forestall the crisis of being overthrown by relying on appeasement is over. The Iranian street will determine the fate the mullahs, especially since all the propaganda by the likes of Rezaian about Rouhani’s moderation has turned out to be hollow. And if past is prologue, the mullahs’ disastrous 40-year reign has proven that no amount of political and economic concessions will moderate the behavior of this regime. The troglodyte clerics only understand the language of decisiveness and “maximum pressure.”

A shorter version of Mr. Gobadi’s response to Razaian’s allegations appeared in the Washingtonpost.com on September 16.