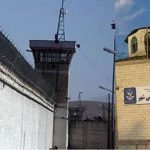 The political prisoners held in Gohardasht prison, write an open letter in support of the protests in Ahvaz and Shush (SouthWest Iran)

#Iran: Massive Demonstration of Workers
Angry workers of the Haft Tappeh Sugarcane mill and the Ahvaz Steel factory rallied on Monday, November 19th, in protest at the arrest of a large number of sugar cane mill workers. https://t.co/aWD639j5LY #IranProtests pic.twitter.com/QtNw5pc27L

In a show of support, political prisoners in Gohardasht prison wrote an open letter declaring their solidarity with the striking workers who are protesting for their rights.

The prisoners wrote: “The glorious resistance and persistence of the hardworking workers of Haft Tapeh sugar mill and Ahvaz steel factory is the echo of enraged shouts of the workers and oppressed people who are fed up from the plundering and tyranny of a regime that is engulfed in corruption and thievery.”

The Haft Tapeh factory workers and Ahvez steel workers are both striking in protest of unpaid wages and poor working conditions. Unfortunately, this situation is not unique. Similar protests are taking place across Iran and have been for months. The MEK and its resistance units are working to organize and lead workers’ protests across all trades and professions.

Haft Tapeh is the largest sugar cane factory in Iran. Thousands of workers depend on the factory as their main source of income. In 2015, the factory was privatized in a controversial deal, and now the company is close to bankruptcy. Many workers have not been paid in months, and the new owners are discussing plans to reduce the workforce. Factory workers blame the problems at Haft Tappeh on local national government officials’ misman and dishonesty.

The political prisoners continued in their letter: “The people [of Iran] who have been witness to the plundering of their possessions and labor on a daily basis, and whose wealth and assets are being spent on warmongering and suppressing their protests are now fully aware of who the real enemy is.”

The Iranian regime has attempted to blame the economic crisis facing the country on U.S. sanctions. The nationwide uprisings began last December, though, long before U.S. sanctions were re-imposed, and protesters have been clear from the beginning that Iran’s problems lie with the ruling regime and its warmongering and corruption. The anti-regime protests have repeatedly called attention to the billions of dollars spent on wars in Iraq, Syria, and Lebanon. Meanwhile, the Iranian people carry banners at home proclaiming, “Workers of Haft Tappeh are hungry!”

The letter concluded with a call for other communities in Iran to join the striking workers. The prisoners wrote: “While stressing our support for the noble workers of Haft Tapeh and Ahvaz Steel, we the political prisoners of Gohardasht hail their commitment and call on all other suppressed communities to unite with them. We believe that the only solution against the tyranny is uprisings and protests. The national unity of all walks of life and suppressed communities will eventually defeat the tyrants.”