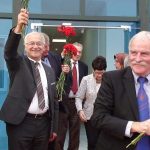 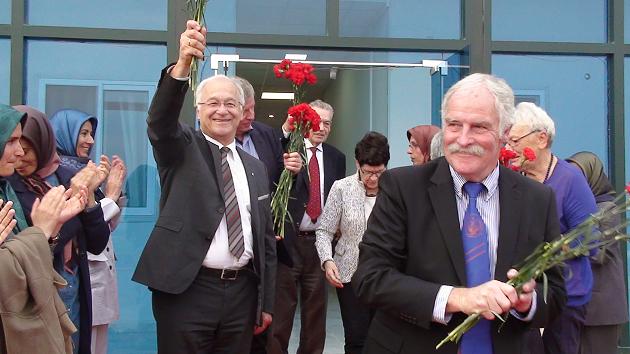 The German delegation consist of present and former members of the Germany’s Bundestag (Parliament) visit Ashraf3, the residence of Iran’s principal opposition, the MEK-October 2018

Martin Patzelt, a member of the German Bundestag for the Christian Democratic Union Party, wrote an op-ed piece in Online Focus. The politician praised the Albanian government for their role in the fight against the Iranian regime and called on Europe to do more to oppose Iran’s state-sponsored terrorism.

He began by describing the important role Albania has played in welcoming persecuted communities. They housed Jews persecuted by the Nazis, and today, the country hosts the People’s Mujahedin Organisation of Iran (MEK), an Iranian pro-democracy group living in exile.

Patzelt praised Albania for its “contribution to peace and humanity”, remarking that “after decades of dictatorship, the Albanian people know… the value of freedom”.

However, Patzelt lamented, the European Union has not shared Albania’s enthusiasm for upholding Iranian human rights and protecting democracy.

Following Albania’s admission of the MEK, the Iranian regime intensified its terror activities on Albanian soil. The Iranian embassy in the Albanian capital of Tirana nearly doubled its personnel numbers and devoted a section of the embassies activities to planning attacks against the MEK and its members.

But the MEK was not deterred and channeled its efforts into the construction of a compound outside the capital. In just twelve months, a compound complete with dormitories, dentists, meeting rooms, a sports center, stores, and hairdressers has been constructed. The MEK and its members live in the compound in relative safety behind its walls.

However, the Iranian regime has attempted to violate this haven. In March, two regime agents were arrested in connection with a plot to bomb the MEK compound during the Persian New Year celebrations.

In response to this attempted terror attack on Albanian soil, the Albanian government expelled the regime ambassador to Iran, as well as other high-profile diplomats in a stern message of defiance to the Iranian regime.

Despite Albania’s strong stance, few other European governments are willing to follow suit. Many would prefer to maintain a policy of appeasement to the Iranian regime. Patzelt lamented, “this is all the more inconceivable since just this year, in France, Germany, Belgium and Denmark assassination plans or dangerous intelligence activities were conducted by the Iranian regime”.

Patzelt asserts that the regime’s surge in terror activities is due to the mounting domestic pressure it is facing at home. 2018 has seen a wave of protests break out across Iran, affecting many of its key sectors including logistics, education, and manufacturing.

Patzelt concludes that “Iranian expansionist policy” and its “chaos in the Middle East and unbridled expansion of fundamentalist ideas and ideologies” should be countered wherever it occurs.

“This includes the support of people who risked their lives for freedom” who “now need to be protected themselves”. The heads of state in Europe should adopt a tougher stance against the Iranian regime, not just to protect dissidents and Iranian human rights, but to protect their own national security interests from Iranian terrorism.